Kicking Brain Cancer to the Curb – With High Heels On

When Maureen M. walked into her first follow-up appointment with the medical team at the Gerald J. Glasser Brain Tumor Center after undergoing brain surgery, she wasn’t just making a fashion statement with her glittery gold high heels. She was making a statement about her resolve to beat stage IV glioblastoma – an aggressive form of brain cancer – and not let it stop her from living her life to the fullest.

Just three weeks earlier, Maureen began getting cramps in her left foot. She initially brushed them off, but the cramps and pain intensified. Soon, she wasn’t able to wiggle her toes and was having difficulty lifting her foot.

“My husband, Eddie, had three back surgeries, and he thought the issue had to be coming from my spine,” Maureen recalls. “After a telemedicine visit with a chiropractor, I went for an MRI scan. Sure enough, I had a herniated L4-L5 disc that looked like it was pinching a nerve. I wasn’t thrilled, but I was satisfied thinking we knew what the issue was and that I would still be able to move my daughter into college the following week.”

In the middle of the night, however, the pain became excruciating. Maureen realized she was paralyzed up to her knee and began getting pins and needles in her left arm. That morning, she headed to the emergency department at Morristown Medical Center. There, a CAT scan and MRI revealed Maureen had a mass on the right side of her brain that would need to be surgically removed.

At Morristown Medical Center, Yaron A. Moshel, MD, PhD, a neurosurgeon and co-director of the Gerald J. Glasser Brain Tumor Center, sat down with Maureen and Eddie to walk them through the scans, what the operation would entail and what would happen next.

“Dr. Moshel spent a lot of time with us and was extremely thorough,” Maureen says. “Surprisingly, I wasn’t scared or overwhelmed. I was just focused on getting the care I needed so I could get back to my family. I also took comfort in knowing Dr. Moshel had treated my dear friend Denise a few years ago. She told me I was in the best hands, and she was absolutely right.” 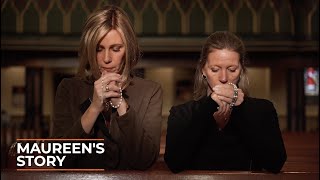 Dr. Moshel explained Maureen’s tumor was situated within the center of the brain that controlled her leg movements.

“We needed to strike a delicate balance with our surgical approach,” says Dr. Moshel. “We wanted to be aggressive and remove the entire tumor, but we also needed to be cautious and meticulous to avoid causing further paralysis or potentially irreversibly damage. In cases like these, the highly advanced technology that we specialize in using at the Glasser Brain Tumor Center is critical.”

Dr. Moshel performed the surgery with intra-operative motor mapping, which electrically stimulated the brain to elicit movement in Maureen’s leg and arm muscles. With this brain mapping technique, he was able to microsurgically tease apart functional brain tissue from tumor tissue during the operation, remove the tumor in its entirety and spare the leg control area of her brain from being damaged.

After surgery, pathology reports confirmed the tumor was a stage IV glioblastoma.

“It sounds funny to say, but I felt so much better after hearing those words and knowing what I’m dealing with,” she adds. “I’m not a statistic. I’m a fighter, and I certainly wasn’t about to let cancer keep me down.”

As Maureen headed to rehabilitation, there were no guarantees she would regain mobility in her leg. Still, she set a goal of walking independently within two weeks. She pushed herself to reach that milestone in even less time, allowing her to walk into her first post-operative appointment with her care team decked out in heels, her vibrant personality still intact.

During that appointment, Maureen met with her integrated care team, including neuro-oncologist Nicholas Metrus, MD; radiation oncologist Byung-Han “Andrew” Rhieu, MD; social worker Janet Lemonnier LSW, MSW and others. In this and subsequent meetings, they reviewed a custom treatment plan designed for Maureen, including phased chemotherapy and radiation therapy treatments, the evaluation of appropriate clinical trials and emotional and family support.

“Maureen started off with a successful surgery and quickly recovered from any deficits. We designed her treatment plan to enable her to maintain that same level of function,” Dr. Metrus explains. “She has been highly motivated since day one. An attitude like that goes a long way when fighting a disease like this.”

Before starting chemotherapy and radiation, Maureen got second opinions from two other well-respected medical institutions. Both agreed the treatment plan recommended by the experts at the Glasser Brain Tumor Center was the best course of action.

“I can’t say enough amazing things about the Glasser Brain Tumor Center team and Morristown Medical Center,” adds Maureen. “They have been there for me in every way possible – physically, mentally and even spiritually. I’m continuing to live my life with my loving family, incredible friends and a job I love … and I truly believe I will beat brain cancer with their help.”

I’m not a statistic. I’m a fighter, and I certainly wasn’t about to let cancer keep me down.”