When Operation Iraqi Freedom launched in early 2003, Ray A. of Jersey City was one of the first Marines to deploy to the Middle Eastern country, carrying out covert reconnaissance missions with the 26th Marine Expeditionary Unit. He was called to his second tour of duty two years later at the Al Asad Airbase, one of the largest U.S. airbases in Iraq at the time, as well as to other deployments during his 15-year career with the Marine Corps. However, after braving the harrowing experiences of war, Ray says he has never been more terrified than he was after learning he had a malignant brain tumor – one that, if he survived, would threaten his ability to talk or move for the rest of his life.

"I’ve lived through the unthinkable during combat, and I couldn’t believe that after all of that, I might be taken out by a brain tumor,” says Ray. “Would I survive? What was my life going to look like? Who would take care of my wife and daughters? The thoughts were demoralizing.”

On his side was the fact that Ray – who became an officer with the Jersey City Police Department and a physical fitness instructor for recruits at the Police Academy after retiring from the Marines – was very attentive to his own health. 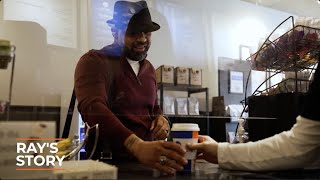 “Many people who have mild warning signs of a brain tumor assume their symptoms are part of old age. By the time they see a physician, the mass is overwhelming the brain. Fortunately, that wasn’t the case with Ray,” explains Yaron A. Moshel, MD, PhD, co-director of the Gerald J. Glasser Brain Tumor Center, who was a key part of Ray’s treatment team.

Ray didn’t experience the telltale symptoms of a brain tumor, such as extreme headaches, blurred vision or seizures. Ray’s tumor was discovered incidentally after he had an MRI scan done to evaluate his pituitary gland and hormone levels.

“It’s not uncommon for early-stage brain tumors to be discovered incidentally on MRI scans,” explains Dr. Moshel. “If caught early, many of these tumors can be treated before they progress to aggressive malignant lesions.”

My story goes to show you have to be proactive with your health. It could save your life.”

A neurologist recommended Ray go to the Glasser Center to consult with Dr. Moshel who specializes in removing complex brain tumors.

Dr. Moshel confirmed Ray had a malignant tumor on his frontal lobe, situated within the expressive speech centers and next to the areas of the brain that also control face and hand movement. Given the location of the tumor in the speech center of the brain, Dr. Moshel recommended Ray undergo awake brain surgery – also known as an awake craniotomy – so he could actively monitor Ray’s speech and motor centers while removing the cancerous tumor.

“I had heard about awake brain surgery before, but I never thought I’d be the one going through it,” says Ray. “Dr. Moshel explained everything thoroughly and was extremely reassuring given his expertise and experience, but the whole situation was nerve-wracking. I feared the worst.”

During the surgery, Ray was alert, though not in pain, which allowed Dr. Moshel to perform awake brain mapping. By asking Ray to do things like talk and sing his ABCs while performing the craniotomy, Dr. Moshel and his team were able to narrow in on the exact locations of specific functions in the brain and determine the safest way to remove the tumor and preserve critical brain tissue.

Ray vividly recalls the surgery, including how he tried to diffuse his fear with humor, cracking jokes and singing a song he had sung to his wife, Ana, on their wedding anniversary during the operation.

Ray started to lose some of his speech during the surgery, but Dr. Moshel continued pushing ahead based on his conversations with Ray before surgery. The plan was to get the entire tumor, within reason, even if it meant giving Ray a slight speech impediment, from which Dr. Moshel believed he would recover. Ray left that judgment to Dr. Moshel and his team, as he wanted to fight the disease as best he could. By the end of the five-hour surgery, Dr. Moshel was able to remove the tumor in its entirety. While Ray had trouble speaking the first few days post-surgery, his speech has largely returned to normal.

“To prevent Ray’s tumor from ever coming back or progressing into an aggressive malignancy, we examined the genetic profile of the tumor,” adds neuro-oncologist Robert Aiken, MD, co-director of the Glasser Center. “This allows us to complement surgery with highly personalized, targeted drug treatments – also known as personalized genomic therapy – in addition to gold standard chemotherapy. Ray’s tumor had a genetic profile that showed the IDH-1 gene mutation, which suggests his tumor will be responsive to treatment and behave well in the long run.”

“Modern radiation therapy delivers precise, high-energy beams in a way that targets Ray’s tumor bed while sparing the healthy surrounding tissue,” says Dr. Emmolo. “This will enable him to continue living his life as normal during treatment and provide the best chance for long-term disease control.”

I’m incredibly grateful for Dr. Moshel, Dr. Aiken, Dr. Emmolo and the outstanding team of nurses and staff at the Glasser Brain Tumor Center for everything they have done for me – from the advanced medical care I have been so fortunate to receive … to the personalized care that has helped me keep a positive mindset through it all”