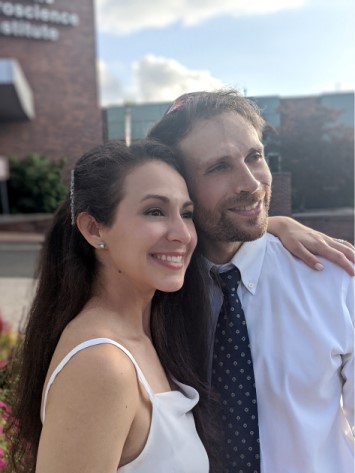 Laura F. walked over to her grandfather in the tea light-illuminated room, and held out her hand.

On her finger was a wedding band – originally her grandmother’s – which, moments before, her husband Daniel slid onto her finger as they exchanged vows and tied the knot in front of their closest family members.

“Does this look familiar to you?,” she asked her grandfather, Jerry M.

The nonagenarian had just weeks earlier experienced a stroke, limiting his expressions and movements. So his response at that moment was all the more surprising, and infinitely memorable.

“He grabbed my hand, and was looking at the ring,” Laura said. “And I saw him smile in his own way.”

That moment just two days prior seemed like it might have been out of reach, before Laura and then-fiancé Daniel H. decided to make a long-shot request. But thanks to the efforts of the team at Overlook Medical Center’s Thomas Glasser Caregivers Center and Jerry’s care team, an impromptu wedding in the midst of a pandemic came together, allowing Jerry to see his granddaughter get married.

Laura and Daniel had originally been scheduled to marry on August 30, at Barn Swallow in Pennsylvania, before the COVID-19 pandemic forced them to reschedule to nine months later. When her grandfather suffered the stroke a few weeks ago, that new date suddenly seemed too far away. 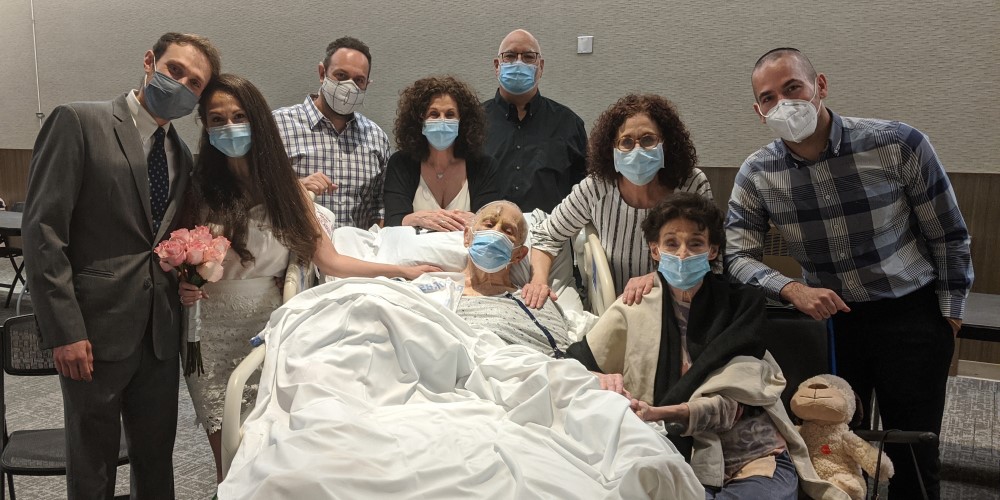 Laura, who had moved in with her parents in Springfield during the pandemic, had been making visits to see her grandfather at Overlook, when the idea came up in conversation with her parents and grandmother of somehow doing a mini-ceremony. The family over the last several weeks had met with Valerie Gagliano, the patient experience liaison at the Caregivers Center. Laura had become comfortable enough to ask the question.

“I have a really crazy question; do you think I would be able to have a little wedding ceremony? Just my and my fiance’s  family,” Laura recalled asking that Friday, September 11.

At any other time, this might have been a mildly challenging request; in the midst of the COVID-19 pandemic, however, the team at the Caregivers Center now had a host of additional logistic challenges to consider –  from limiting the number of people who could be allowed, to finding an area with enough space for social distancing. There was also the challenge of finding a way of getting Jerry, unable to leave his bed, to the event, and ensuring two nurses were able to accompany him throughout. 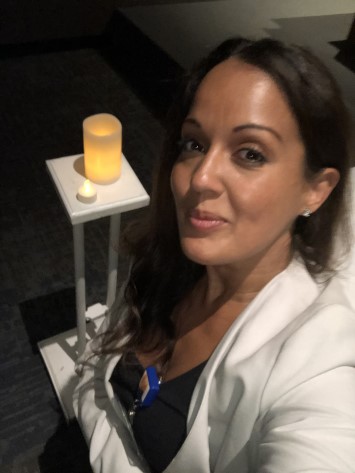 And, of course, making the whole thing a properly memorable wedding.

“At the Caregivers Center, Marian Teehan, LCSW, and I strive to provide support for the family and other caregivers of our patients. Sometimes that support can take on unexpected forms,” Gagliano said. “Laura and her family came to Overlook so many times to support her grandfather, you could see each time how much he means to them. I felt that trying to fulfill this request was the least we could do.”

Gagliano was undaunted. “Let me see what I can do for you,” she recalled replying to Laura, and explaining that she would need to get Jerry’s doctor to sign off, along with other approvals. “Overlook would be happy to host it.”

The next 24-plus hours included a flurry of calls and emails to colleagues throughout the hospital, starting with Brent Jones, nursing administrative manager for the hospital.

Her proposal to Jones included limiting the event to a maximum of 12 people, all masked and socially distanced, none of whom would be under the age of 18. There would be no food served, and the groom’s family would need to leave following the ceremony.

“It was a tall order to be sure, but Valerie and Marian always work closely with the clinical teams throughout the hospital whenever a patient’s family needs support, so I was confident that together we could find a way to make this wedding happen,” Jones said.

Jones approached Jerry’s physician, Tiziana Califano, MD, who gladly approved the plan, but stated that the ceremony could take no more than 15 minutes and that a nurse and technician would need to accompany the patient during the ceremony.

“The safety and health of our patient is always our top priority at Overlook, so it was important to make sure that Jerry received the appropriate care at all times, no matter where he was in the hospital,” Califano said. “I knew he would be in good hands with our team, so I was more than happy to do my part for this special request.”

“Taking a nurse team member from her unit for an extended period of time can be challenging,” said MaryPat Sullivan, chief nursing officer. “But the nursing team recognized that moments like this happen once in a lifetime.”

Melissa Errico, RN, who was treating Jerry, and had become familiar with the family, was also happy to oblige. She and Stephanie Rodriguez, patient care technician, would accompany him to the ceremony. 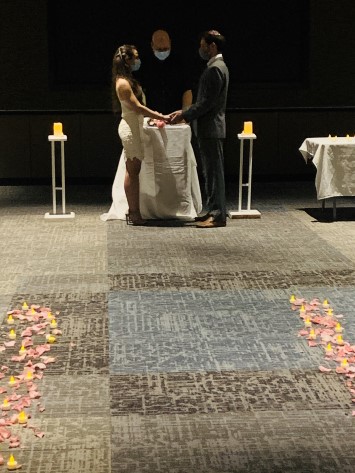 “Our nursing team always has one another’s backs, and so there was no challenge in finding coverage while we took Jerry to the wedding,” Errico said. “Our nurses are committed to ensuring every patient’s experience is exceptional.”

All of this hinged on how well Jerry was doing the day of the ceremony – the shortest of short notice.

Gagliano called Laura and told her to tell her fiancé  and their families to prepare to mobilize the next day – just in case.

“Everybody was going crazy making plans for a wedding that may not happen,” Laura recalled. She and Daniel began picking out outfits to wear, as her family also made preparations.

At 12:30pm on Sunday, September 13, Gagliano heard from Califano that Jerry was cleared for the ceremony. She then called Laura and said the wedding was on.

“I called my fiancé and told him, ‘ok we’re going to be married in three hours, so be prepared,’” Laura recalled. ““He’s the most patient person, and he just said, ‘however you want to do this, let’s do it.’”

At the hospital, Gagliano had already begun shifting into the role of ad-hoc wedding planner. Overlook’s Bouras Auditorium, with ample space for social distancing, and wide double doors, proved to be the optimal location to host the ceremony. She set about decorating, arranging tea lights, table linens and an altar. Petals from flowers purchased by Laura’s aunt, Karen M., lined the path leading to the altar.

“I walked in and she set up this beautiful layout,” Laura said.

Performing the ceremony was Laura’s father, Bart F., who, as a former mayor of Springfield, was able to serve as officiant. Her mother, Lisa F., walked her down the aisle. With her and Daniel’s immediate family members gathered, socially spaced, and her grandfather watching from his bed, Laura and her husband exchanged vows.

It wasn’t the wedding she and Daniel had envisioned, and the couple is still planning a more traditional ceremony in 2021. But for Laura, having her grandfather there for this important occasion made all the difference.

“Everyone was so calm and so willing to work with this crazy idea,” Laura said. “I am so grateful to everyone who was able to make it work.”

Gagliano said beyond just pulling off the gargantuan feat of putting together the wedding in such a short time, the Overlook team took pride in supporting the entire family.

“Moments like these are why Overlook is here,” Gagliano said.