Immunotherapy in Action: Changing the Game for Brain Cancer Survival 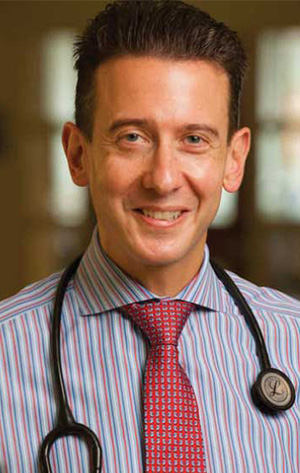 Years ago, having brain metastases meant a patient might survive for six months. They would undergo radiation and get relief from their symptoms, but they ultimately would succumb to the disease in short order. Now with immunotherapy and targeted therapy, the game has changed for a number of diseases. Medical oncologist Andrew M. Bernstein, DO, explains.

What is the difference between traditional chemotherapy, immunotherapy and targeted therapy?

Immunotherapy is very different from chemotherapy, which attacks actively dividing cells – both cancer cells and non-cancerous cells that are caught in the crossfire. That’s why patients experience so many side effects with chemo, such as hair loss, gastrointestinal issues or feeling weak and tired. Thankfully, many of these side effects can be modulated with steroids.

Targeted therapy is used for treating cancers that have a specific genetic mutation. For example, specific subsets of lung cancer that spread to the brain have mutations that lend themselves to these oral therapies, which can cross the blood-brain barrier and provide very effective treatment.

Where is immunotherapy being used most effectively?

Renal cell cancer, a type of kidney cancer with a predilection to brain metastases, is the poster child for immunotherapy. Chemotherapy has never worked very effectively for this disease. Now, with a combination of immunotherapies – which has response rates as high as 71% – patients with renal cell cancer are living longer and better, even with advanced disease. In fact, one of the first patients I saw when I started at Chilton Medical Center more than 15 years ago was a Stage IV renal cell cancer patient. The disease had already gone to his bone, and he wasn’t amenable to surgery. Thanks to immunotherapy, he is alive and well 15 years later.

What is “chemo brain” – and does it happen with immunotherapy?

“Chemo brain” is a term some people use to describe the brain fog associated with chemotherapy treatment. In addition to the underlying malignancy affecting the body, the chemotherapy can have a toxic effect and cause cognitive issues. We don’t see this with immunotherapy.

How do you uplift your patients who are facing metastatic cancer?

I stress the advances we have made – and continue to make – in cancer treatment. We are no longer trying to get people to survive six months; we are now talking in terms of years. I also do my best to synthesize the many amazing experiences I have seen patients live through. This includes stories like one patient who had bladder cancer that had metastasized to the bone and was causing clots in his lungs. His urologist told him to get his affairs in order and had him headed for hospice. In the meantime, I treated him with chemotherapy. The tumor in his bladder melted away, his bone repaired itself and five years later, he is disease-free.