September 14, 2018, Morristown, NJ – Atlantic Ambulance, a division of Atlantic Health System, sent a team of three paramedics in an Advanced Life Support (ALS) ambulance to South Carolina to aid in the relief efforts being organized by FEMA in preparation for Hurricane Florence.

The team, consisting of Richard Hathaway, Matthew Chiang and Dan Vitale, left late Thursday afternoon and drove overnight to a rendezvous point in South Carolina, where they will assist in relief for a minimum of three days, up to two weeks. 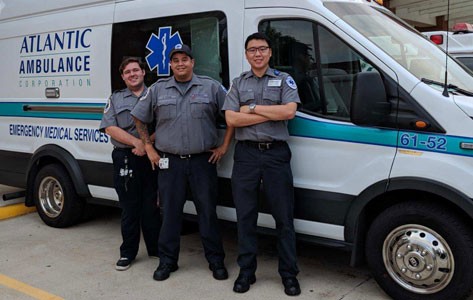 The Atlantic Ambulance team was sent in response to a request for aid by American Medical Response, FEMA’s primary emergency medical service response provider. When the team arrives at their assigned area, they will be working under the guidance of FEMA, State and local EMS agencies.

Atlantic Ambulance immediately responded to the request from AMR, and the team quickly assembled on Thursday. Hathaway, a native of Morristown now living in Randolph, who received his certification as a paramedic only in July, said he was eager for the unique experience.

Chiang recalled the aid from paramedics in other states who came to New Jersey’s aid in the aftermath of Hurricane Sandy, and wanted to repay the favor.

“I remember how big of a help and how inspirational they were to the community and to the service, and we’re just hoping we can provide the same kind of service and help to the community down there,” Chiang, a Bridgewater resident, said.

“Atlantic Ambulance paramedics and EMTs are a special group who have an intense drive to provide emergency care to whomever needs it. When they get to do so beyond the communities we usually serve, it’s a special privilege, and we are fortunate to be able to send some of our personnel and assets to assist those in the path of Hurricane Florence,” said David Ferguson, director of Atlantic Mobile Health, which includes Atlantic Ambulance.

Ferguson noted that the team’s voyage south will not affect Atlantic Ambulance’s day-to-day operations and ability to provide timely medical response to communities in New Jersey. Atlantic Ambulance includes a fleet of more than 100 ambulances and paramedic vehicles, as well as 133 paramedics and 430 EMTs.

“When disasters of this magnitude occur, we appreciate the support of all the EMS agencies who come together to work tirelessly on behalf of the affected communities,” said Ted Van Horne, AMR President and CEO.

AMR has a national agreement with FEMA to provide ground ambulance, air ambulance, paratransit services and non-ambulance EMS personnel to supplement the Federal and Military response to a disaster, an act of terrorism or any other public health emergency.

In addition to the employed workforce, Atlantic Alliance, a Clinically Integrated Network represents more than 2,500 health care providers throughout northern and central NJ. Atlantic Health System leads the Healthcare Transformation Consortium, a partnership of 6 regional hospitals and health systems dedicated to improving access and affordability and is a founding member of both the PIER Consortium – Partners in Innovation, Education, and Research – a streamlined clinical trial system that will expand access to groundbreaking research across 6 health systems in New Jersey and Pennsylvania and AllSpire Health Partners, a consortium of 5 leading health care organizations dedicated to serving patients, families and communities in New Jersey, New York, Maryland and Pennsylvania.