The event honored those whose leadership, civic involvement, and professional efforts have helped make New Jersey a better place for women.

The Philbrook Award, which commemorates the first woman attorney in New Jersey, is presented to a woman who is an attorney with a distinguished career during which she has removed barriers and created opportunities for other women in the interest of advancing equality in all spheres.

Ferraro was presented the Philbrook award by Betsy Ryan, the former president and CEO of the New Jersey Hospital Association. Ferraro credited her parents with giving her the confidence and belief to aspire to do anything. 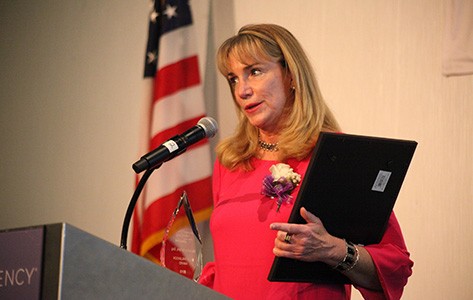 “The sky was the limit. I think that’s a very essential and important message that all young women need to hear,” Ferraro said.

“Until there is gender equality in every single election, from school board to the Presidency, helping women run for office and fighting for women to win will be of the utmost importance,” Ferraro said. “Until that time comes, it is on all of us to do our part to make this a truly equal political landscape.”

In her role at Atlantic Health System, Ferraro successfully creates and implements the system's government relations and public policy strategy. She is solely responsible for enhancing the system's presence and position with state and federal leaders.

An expert in legislative advocacy, and coalition building, Ferraro has been a tireless, driving force in numerous changes to N.J. law that have greatly benefited patient care, and received wide support and accolades in the healthcare industry.

Ferraro was the architect for Atlantic Health System's corporate strategic giving program and heads the committee that distributes millions of dollars to charities with aligned missions.

Ferraro is a member of the Wall Township Planning Board, and the boards of the New Jersey State Chamber of Commerce, the National Public Affairs Council (the preeminent association for public affairs professionals worldwide), Georgian Court University, Brookdale Community College, the New Jersey Hospital Association HealthPAC Board of Directors, Policy Development Committee and Government Relations Committee, and the Fair Share Hospitals Collaborative Government Affairs and Strategic Planning Committee. Ferraro also acts as a mentor to young and seasoned professionals in varied fields.

Ferraro has been recognized as one of the most influential people in New Jersey politics and public policy. In 2016, Ms. Ferraro's professional expertise was recognized and honored at the Executive Women of New Jersey's Policy Makers awards. In 2017, NJBIZ named Ferraro to its "Power 50 Health Care,” list. Ferraro also received the 2016 American Hospital Association, Political Action Committee, Most Valuable PAC Players award.

Ferraro received her Bachelor of Arts degree in Communications from the University of California at San Diego and her Juris Doctorate degree from Rutgers University.

In addition to Ferraro, other award recipients included:

The Women's Political Caucus of New Jersey is the only multi-partisan, pro-choice, grassroots organization dedicated to increasing women's participation in the political process and creating a political power base to achieve gender equality. We recruit, train, and support women candidates for elected and appointed offices at all levels of government and we sponsor community education programs designed to encourage civic engagement.

In addition to the employed workforce, Atlantic Alliance, a Clinically Integrated Network represents more than 2,500 health care providers throughout northern and central NJ. This network includes 1,000 physicians and providers within the Atlantic Medical Group, as well as members of the Atlantic Accountable Care Organization and Optimus Healthcare Partners which work to enhance patient care delivery.

Atlantic Health System leads the Healthcare Transformation Consortium, a partnership of seven regional hospitals and health systems dedicated to improving access and affordability and is a founding member of both the PIER Consortium – Partners in Innovation, Education, and Research – a streamlined clinical trial system that will expand access to groundbreaking research across six health systems in New Jersey and Pennsylvania and AllSpire Health Partners, a consortium of five leading health care organizations dedicated to serving patients, families and communities in New Jersey, New York, Maryland and Pennsylvania.