Overlook is one of only five sites in the United States to use the vessel in the leg. The HUMACYL® Human Acellular Vessel (HAV) is produced by Humacyte, a pioneer in regenerative medicine with investigational products for vascular and non-vascular applications. 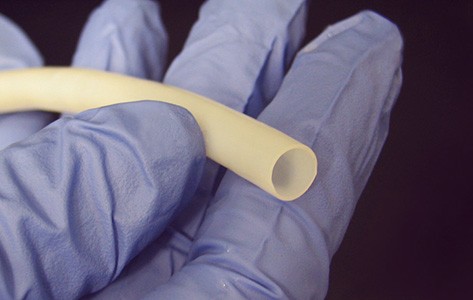 The procedure at Overlook is part of a Phase II clinical trial, announced in late 2016 by Humacyte. Overlook previously took part in a randomized clinical trial placing the bioengineered blood vessel in the arm as an access for hemodialysis in patients with End-Stage Renal Disease (ESRD).

Patients suffering from PAD are usually treated with minimally invasive methods such as angioplasty or stents—procedures for which Overlook’s vascular surgery team has been nationally recognized.

However, when minimally invasive procedures are insufficient, traditional surgical techniques are required in which a person’s vein is utilized as an artery to bypass a blockage in the leg. If either a person’s vein is not adequate— due to small size or possibly being previously removed -- a synthetic, plastic (polytetrafluoroethylene; ePTFE) graft has traditionally been used. However, these grafts can become occluded over time, or become infected, and may require multiple procedures or hospitalizations to keep them working. Other biological alternatives to ePTFE have been studied for dialysis access; however, none have shown long-term viability or gained wide acceptance.

Humacyte’s investigational HAV are formed from banked human vascular smooth muscle cells. The vessels are then decellularized, removing cells and DNA, while retaining proteins like collagen, which are the same in all humans and which preserve the mechanical properties of the vessel. No cells from the recipient patient are required for the production process, and the vessels can be stored under refrigerated conditions and ready in the operating room at the time of need.

“For patients who cannot have one of their own vessels used as a bypass conduit, the organic nature of the HUMACYL vessel has the potential to offer a promising new option, which can be readily available at the time of surgery,” said Clifford Sales, MD, chief of vascular surgery at Overlook. “Given our experience in working with this unique vessel, we are excited to explore its use in treating patients with PAD.”

Peripheral Arterial Disease occurs when the arteries in your body become clogged with plaque. This tends to occur over time—usually as we age—and is best thought of as the “opposite” of a tree growing in your backyard.  As a tree grows, it places a layer of bark on the outside every year, thus getting wider and bigger. An artery may form a layer of plaque inside the artery every “year” so as to get smaller and smaller.  As the inside of the artery gets smaller—similar to a pipe accumulating “junk” on its inner surface--the amount of blood that flows through it diminishes.  When the blood flow decreases enough, the areas supplied by those blood vessels (arteries) receive less blood (less oxygen and less nutrients) causing them to suffer.

According to the American Heart Association, PAD affects about 8.5 million Americans over the age of 40, with smokers and those with diabetes at high risk.  Genetics also plays an important role in predisposing people to developing PAD.

PAD develops much the same way that heart disease and strokes develop—atherosclerosis or plaque accumulates on the inside of the artery thereby blocking the way for blood to get to its destination.  Patients typically report this as a pain in their legs when they walk.  It can also manifest—in more extreme forms—as a non-healing wound on the legs or feet.  Claudication is frequently described as a “Charley Horse” that occurs when one walks or exercises.  PAD can also be “asymptomatic” which means that there are blockages in the arteries that are undetected without the use of special examinations.  While asymptomatic PAD is not terribly concerning itself, it can be a marker of disease in other parts of the body that can cause problems if left untreated.  It is for this specific reason that the detection of PAD is important—as a marker for other more dangerous conditions.

PAD can be detected through various techniques, like those used at the Noninvasive Vascular Laboratory at Overlook Medical Center, a nationally recognized leader in the diagnosis of vascular diseases.

Humacyte, Inc., a privately held company founded in 2004, is a medical research, discovery and development company with clinical and pre-clinical stage investigational products. Humacyte is primarily focused on developing and commercializing a proprietary novel technology based on human tissue-based products for key applications in regenerative medicine and vascular surgery. The company uses its innovative, proprietary platform technology to engineer human, extracellular matrix-based tissues that can be shaped into tubes or sheets, with properties similar to native tissues. These are being developed for potential use in many specific applications, with the goal to significantly improve treatment outcomes for many patients, including those with vascular disease and those requiring hemodialysis. The company’s proprietary technologies are designed to create off-the-shelf products that, once approved, can be utilized in any patient. Learn more about Humacyte >