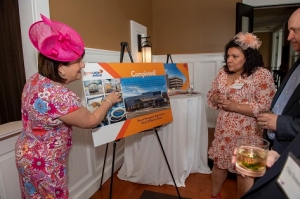 SUMMIT, NJ – MAY 6, 2022 – The Overlook Foundation, the non-profit, private organization that supports Atlantic Health System’s Overlook Medical Center, kicked off a public campaign to raise funds for a multi-phase expansion and enhancement project that will transform the hospital, positioning it for future excellence.

The campaign, Overlook Ahead, will help to financially support the enhancement plan that will restructure 90 percent of Overlook’s patient care spaces including new medical infrastructure in every room, a tripling of the number of private rooms, several brand-new units, and eight more operating rooms. In all, the plan includes 456,000 total square feet of new and renovated space at Overlook’s main campus in Summit, at a cost of $169 million.

“Overlook is recognized as a beacon of innovation and excellent care, with an amazing team of clinicians and cutting-edge programs,” said Stephanie Schwartz, president of Overlook Medical Center. “I look forward to continuing that tradition of excellence and taking it to the next level. As we embark on this campaign, we’re giving our world-class teams the facility, tools and resources to complement the incredible work they do, and setting Overlook up to provide the best care now and in the future.”

“For more than 115 years, Overlook has stood ready to assist those in need,” said Clelia Biamonti, executive director of the Overlook Foundation. “Rarely has our commitment to and impact on the community been tested more than over the last 26 months, yet through the compassion and resilience of our team members, Overlook has emerged stronger. We have learned new ways to care for patients, and through this campaign, are preparing ourselves for what the future has in store.”

About 200 of Overlook’s supporters attended a kickoff event at the Ryland Inn in Whitehouse Station on Sunday, May 1, to hear more about the various projects directly from leadership at the hospital and foundation, as well as from the clinicians whose ability to provide exceptional care will be directly enhanced. The equestrian-themed event was titled “Off to the Races,” ahead of the Kentucky Derby later that week.

“After becoming involved at Overlook some 20 years ago, we have seen the hospital grow into a premier destination in the health care arena,” said campaign chairs Meri and Sol Barer, longtime supporters of Overlook. “It has been our pleasure to partner with an amazing community of donors to provide support to the world-class physicians, nurses, and team members who deliver the very best care to patients and their families each and every day. This campaign for a transformed hospital excites us because it will create a patient experience like few others.”

The event included remarks from Owen Faecher, who in 1995, as a newborn, was treated at Overlook for hypoplastic left heart syndrome, a congenital heart defect that affects the flow of blood through the heart. Faecher recounted how his parents, who had recently moved to the area, rushed him to Overlook where doctors and nurses immediately moved into action to save his life. Now 26, Faecher thanked those clinicians and emphasized to supporters at the event how important it was to have high quality care close to home.

“The truth of the matter is, no one plans on going to a hospital, but when a tragic, scary emergency is unfolding, you’d better believe the quality of the hospital you’re on your way to is absolutely crucial,” Faecher said. “My life has not been easy, but Overlook was there when we needed them, and they gave me the chance to ‘start from scratch,’ as is heard in the horse racing arena. And I’d say I’m a ‘sure bet.’”

The plan includes projects that were recently completed, notably the renovation of the entrance to the Bouras Emergency Department, the South Parking Garage for employees, and the Hersh Children’s Center, all of which were completed in 2021. The children’s center, a nearly 12,000-square-foot facility that opened in January, centralizes the hospital’s pediatric emergency and inpatient services in one convenient, family-friendly space.

The campaign will seek to support the following projects which are either underway now, or expected to begin in the near future:

·       With some 15,000 surgeries performed each year at Overlook, the Reeves Same Day Surgery Center will be completely renovated and expanded to include two additional surgery suites, a refurbished family waiting room with private consultation area, and enhanced pre- and post-op units. For inpatient surgeries, multiple new state-of-the-art surgical suites are planned which will optimize Overlook’s ability to perform complex procedures within a broad range of specialties including neuro, orthopedics, urology, and others.

·       Major renovations to the Frank and Mimi Walsh Maternity Center will include expanded space featuring new cesarean-section suites, birthing suites and all-private postpartum rooms with enhanced proximity to a renovated Neonatal Intensive Care Unit (NICU). Redesigned for maximum efficiency and collaboration of the maternity care team, the unit will be poised to welcome future generations with the kind of safe and soothing environment essential to a calm patient experience.

·       A redesigned inpatient neuroscience unit will bring together the entire neuroscience team, with all single patient rooms to allow for privacy, comfort, and support from loved ones. Overlook’s neuro ICU will be expanded, as will its acute stroke and spine surgery capabilities, while a new epilepsy monitoring unit will provide timely 24/7 clinical responses to patients with seizure disorders. Dedicated neurosurgical operating rooms will feature state-of-the-art technology to handle the most complex vascular, brain tumor, and skull base procedures, and new outpatient space will be home to centers of excellence, bringing together Overlook’s neurologists, neurosurgeons and their multi-disciplinary teams to provide comprehensive care coordinated by patient navigators.

·       Newly designed private rooms in Overlook’s intensive care/critical care units will be larger and more technology-enabled to provide for the 24-hour care needed by patients whose conditions are not stable enough for transfer to a regular hospital room. The renovated space will allow ICU/CCU health care providers to deliver extraordinary care in a thoughtfully designed environment.

·       Construction of a new state-of-the-art cardiac unit with single rooms will allow Overlook to offer intensive, intermediate, and/or standard acute care, thereby enhancing their safety and comfort. Furthermore, an expansion of the services provided by the Thomas Glasser Caregivers Center, to include a satellite center on the new unit, will foster an improved healing environment for both patients and families.

Atlantic Health System provides care for the full continuum of health care needs through 23 urgent care centers, Atlantic Visiting Nurse and Atlantic Anywhere Virtual Visits. Facilitating the connection between these services on both land and air is the transportation fleet of Atlantic Mobile Health.

Atlantic Health System leads the Healthcare Transformation Consortium, a partnership of six regional hospitals and health systems dedicated to improving access and affordability and is a founding member of the PIER Consortium – Partners in Innovation, Education, and Research – a streamlined clinical trial system that will expand access to groundbreaking research across five health systems in the region.