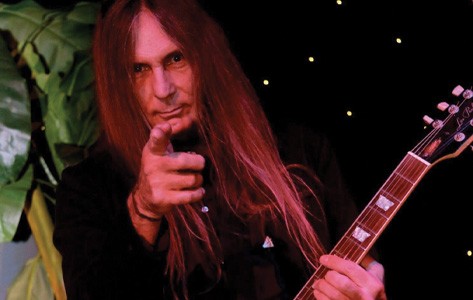 When you love making music as much as Brian S. of Cranford, you can lose track of time when you’re strumming on your guitar. But time stopped still in May of 2021 when Brian got some sobering news – he had colon cancer.

Born in New Jersey, Brian moved to Nashville in 1999 during the city’s ‘good old days’ to pursue a career in music. He worked 10-hour days as a tattoo artist, and on his days off, rode his motorcycle and performed evening gigs at some of the city’s best honky-tonk hot spots on Broadway or 2nd Avenue. Brian played blues, country rock and old school songs by American legends Johnny Cash and Hank Williams.

“Music was my life and old Nashville was a cool scene that made dreams come true for a lot of people,” says Brian, who has been playing the guitar since he was five years old.

But last year at age 68, Brian’s music scene was silenced when he noticed a bulge in his abdomen and blood in his stool. “I shook it off, thinking maybe it was a hernia or hemorrhoids” he said. “I lift weights. I ride motorcycles. I figured I had strained something to cause it.” But Brian’s doctor thought otherwise and told him to get to the emergency room ASAP.

To ensure the best possible treatment and supportive care for Brian, Dr. Rossmer worked closely with a team of oncology specialists, including colorectal surgery, diagnostic radiology, and medical oncology, as well as many other health care professionals.

Brian put his faith – and his life – in the hands of Dr. Rossmer and her team that day. “Brian was operated on in a fairly urgent fashion,” says Dr. Rossmer. “He had severe anemia and an impending blockage from the tumor. I had concerns about his recovery given the condition he was in before we started. But Brian has done remarkably well -- I believe the combination of his positive outlook on life and our multidisciplinary team approach to care were, in the end, responsible for his success.”

“Every single person I met at the hospital was incredible,” added Brian. “Whatever they did, each person was part of my great experience there. Everyone I met was absolutely amazing.”

Today, Brian is back to the life he loves – on stage plucking and strumming his guitar and riding his fully-custom Harley chopper built with a 1958 engine. Brian’s music still transports him back in time to those glorious years when he was performing in Nashville. And this year, he hopes to finally make the trip to Sun Records in Memphis to record a few tribute songs celebrating his idols – and his health.

Every single person I met at the hospital was incredible. Whatever they did, each person was part of my great experience there. Everyone I met was absolutely amazing.

Atlantic Health System Cancer Care offers an unparalleled network of cancer specialists and resources through its flagship Carol G. Simon Cancer Center at Morristown and Overlook medical centers, as well as its comprehensive oncology programs at Chilton, Hackettstown and Newton medical centers. With more than 250 cancer specialists and medical professionals, all five hospitals and Atlantic Medical Group have been recognized nationally for their role in advancing the fight against cancer.

Atlantic Health System Cancer Care is the lead affiliate of Atlantic Health Cancer Consortium (AHCC) - the first and only New Jersey-based National Cancer Institute (NCI) Community Oncology Research Program (NCORP). Atlantic Health System is affiliated with the Translational Genomics Research Institute (TGen) of Phoenix, Arizona, and together they have created the Breakthrough Oncology Accelerator, a pioneering research and clinical collaboration designed to improve patient access to the most innovative and sophisticated therapies for cancer.