The physicians and team members at Atlantic Health System Maternity Centers are committed to helping expectant parents safely and comfortably welcome their newborns while COVID-19 is in our communities. Read COVID-19 FAQs and a message for expectant parents>

When you’re pregnant with twins, you fully accept that your family is growing in leaps and bounds. What you don’t always expect is for it to be sooner than originally planned. This was the scenario Divya and Srinath S. found themselves in when they learned that their babies might be born premature due to the onset of high blood pressure.

At her 32nd week of pregnancy, Divya was admitted to Overlook Medical Center’s Frank and Mimi Walsh Maternity Center for two-plus weeks of bedrest. Being a first-time mother, she was naturally apprehensive about her babies coming early, but the hospital’s doctors and nurses answered all of her questions and put her mind at ease.

“I never had to hesitate to ask even the smallest of queries,” Divya says. Nor did she shy away from preparing for her twins’ arrival, ordering many nursery necessities online from her hospital room.

“We weren’t expecting the babies to arrive so early, so we did not have much in place,” she admits. “However, we did have a baby registry in place. I started ordering stuff in those two weeks that I was in the hospital prior to their birth.”

As the packages arrived, Srinath prepared the nursery and not a moment too soon. At 34 weeks, the proud couple welcomed to the world their daughter, Avni, and their son, Anay, weighing just 4 pounds and 4.4 pounds, respectively. 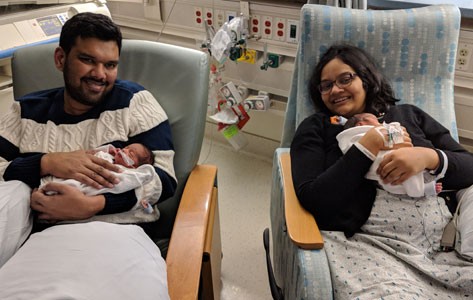 The twins’ small stature required a stay in Overlook Medical Center’s Neonatal Intensive Care Unit, where they received all of the supports necessary in order to grow and thrive. The 15-bed NICU, designated a Level 3 (Community) Intensive Perinatal Center by the New Jersey Department of Health, offers state-of-the-art treatment for a wide range of neonatal conditions and is equipped to care for the highest-risk mothers and babies. A neonatologist or neonatal nurse practitioner is available 24 hours a day in the event of an emergency and the neonatal team works closely with the hospital’s obstetricians and perinatologists.

Divya and Srinath praise the NICU nurses for setting their whole family on the right path.

“Being twins and preemies, my newborns were in the NICU for a couple of weeks,” says Divya. “As nerve-racking as it was for us as first-time parents, the nurses there took great care of the babies and me. They taught me everything about childcare, from changing diapers to feeding and cleaning them. Going to Overlook Medical Center was the best decision I made during my pregnancy!”