Christine’s new haircut wasn’t intended to be a fashion statement. When people commented on her shaved head, she would politely reply that she recently had brain surgery as part of a leading-edge treatment known as deep brain stimulation (DBS). The procedure, which was performed at Overlook Medical Center, controlled the debilitating effects of her Parkinson’s disease and greatly reduced her medications.

Under the care of movement disorders neurologist Marci Rabin, MD, Christine T. was taking medication to control the tremors in her right hand. Over time, her symptoms grew to include stiffness and impaired movement in her right arm and leg and difficulty walking.

“There was no time off from the Parkinson’s. It was completely controlling my quality of life,” says Christine.

“Although Christine had an excellent response to the medication, over time – as brain chemistry changes – the drugs lose their effectiveness in controlling Parkinson’s symptoms,” says Dr. Rabin.

The good news, however, was that Christine was still in the early stages of the disease and had improved motor function with medication. She was also in good physical and psychological health, aside from her tremors. All of this made her an excellent candidate for DBS.

Diane Babek, RN, MSN, Overlook Medical Center’s Movement Disorders Program nursing coordinator, arranged Christine’s preoperative care, which included neuropsychological testing, an assessment of her symptoms with and without medication, and detailed brain scans. She also introduced her to former DBS patients, who shared their experiences, and set up a consultation with neurosurgeon Paul R. Gigante, MD. Dr. Gigante had been performing deep brain stimulation for more than eight years and was one of a select few neurosurgeons in the tri-state area using a frameless technique that improves patient comfort during the operation.

“Dr. Gigante and the entire movement disorders team were very positive about my potential outcome from the surgery,” says Christine. “Their experience and confidence, my faith in God, and the support of my family and friends were guiding forces throughout the entire process. I felt as if I was part of a tremendous team.”

During the first part of the two-part DBS surgery, Dr. Gigante implanted a thin wire lead with electrodes at the tips into targeted areas on both sides of Christine’s brain. He then backed off the anesthesia, so that he could assess her symptoms while applying electrical stimulation. This helped ensure that the electrodes were in the optimal location.

“There was no pain or discomfort as I hovered in a semi-awake state and Dr. Gigante began giving me tasks to do,” says Christine. “I remember him asking me to tap my pointer finger to my thumb and to repeat the phrase ‘two yellow lilies.’”

“Christine’s tremors and rigidity were immediately improved during stimulation testing in the operating room,” says Dr. Gigante. “With functional mapping, 3D navigation and audio recording technology allowing us to hear the distinct rhythmic ring of brain cells, we could place electrodes within a millimeter of the target area.”

In the second stage of DBS surgery, Dr. Gigante placed a battery-operated, medical device called an implantable pulse generator (IPG) near Christine’s clavicle. He next connected the IPG, which is roughly the size of a stopwatch, to the electrodes in Christine’s brain via an insulated wire passed under her skin.

The IPG, when activated, delivers electrical current to the areas of the brain and helps regulate the circuits that control motor function. It performs similar to the way a cardiac pacemaker controls heart rhythm. 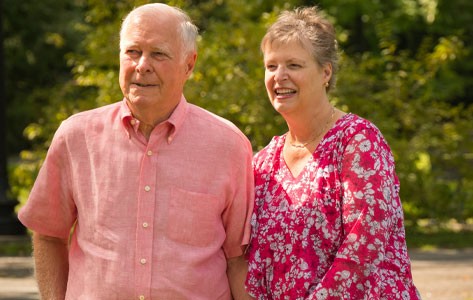 Christine stayed just one night in the neuro intensive care unit (ICU) following the surgical procedure. She later returned to Overlook Medical Center, where Dr. Rabin turned on the IPG and began programming it to find the most effective parameters. The tremors stopped shortly thereafter and with additional DBS adjustments over time, Christine’s medication was reduced from 1,170mg to 190mg, taken two times a day, instead of five.

Christine has come a long way since the day her friends threw her a head shaving party before her surgery. Her hair has since grown in, but more importantly, she now functions better at work, walks with ease and has much more energy to play with her young granddaughters. These are her moments that matter, made possible by Overlook Medical Center’s movement disorders team.