Hackettstown Medical Center has been open since 1973, but its beginnings go back to the 1940s when William Rossy and other residents of Hackettstown saw the need for a hospital in their home town. 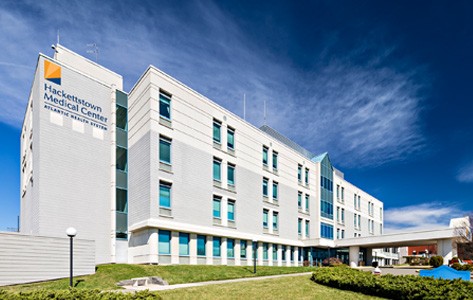 The first recorded plea for a hospital in Hackettstown came in 1945 from Dr. Carl Maxwell, a local Seventh-day Adventist physician. Several years passed before a group of Kiwanis Club members and other dedicated individuals formed the Hackettstown Hospital Committee, which first met in 1953. In 1955, Tommy Tomeo was president of the local chapter of Unico International, an Italian service club of businessmen and professionals. Dr. Frank Rocco spoke at a chapter meeting about the health care needs of the community and the distressing fact that the nearest hospital was some 20 miles away. Tomeo was hooked on the idea of building a hospital and, along with 20 other townspeople, formed a corporation called Hackettstown Community Hospital and became its first executive committee president. They pooled $22,500 out of their own pockets to purchase the hospital's 15 acres of land in 1956 and named Dan Allen, a local gentleman farmer, as Board president.

At the time, the State of New Jersey considered Hackettstown a low-priority site for a hospital and would not support even the minimum 25-bed hospital that was requested. As the trustees persevered, the state raised the minimum to 100 beds. Banks would not make a loan toward such a large endeavor, and ten years slipped away as trustees wrote newspaper articles, made speeches and held monthly board meetings. The financial roadblock seemed almost insurmountable. However, as the years passed by, the dream of a hospital did not.

Then in 1967, the first campaign unofficially began when a conversation between Henry Roehrich, a Hackettstown farmer and chairman of one of the two banks in town, and Thomas Kopko, a Seventh-day Adventist pastor and Bible teacher from nearby Garden State Academy, turned to a discussion of the world-wide chain of hospitals operated by the Adventists. The church, a conservative Christian organization, operates over 400 medical facilities in some 69 countries, ranging from the acclaimed Loma Linda Medical Center in California and 1,200-bed Florida Hospital in Orlando to boat clinics on the Amazon and mission hospitals in Africa.

Banker Roehrich noticed Frank DeLello, a member of the original hospital board of directors, entering the bank and invited him to join in the conversation about the hospital. Mr. DeLello then suggested that the Adventist church build a hospital in Hackettstown.

Subsequent discussions and events led the hospital board, unable to see their way around funding difficulties, to invite the SDA church to assume ownership, control and management of the hospital-to-be. Adventist church officials dispatched Milton Murray to visit Hackettstown and conduct a feasibility study among the townspeople. The Adventists and the community then took on the task of financing and building the hospital together as a team--individuals, families, small businesses, large corporations, foundations, service clubs, and government and SDA church representatives. Dr. Charles Kwartler served as chairman of fundraising. Tommy Tomeo provided invaluable help in discussions with Senator Wayne Dumont, who opened the door for Tomeo and Kwartler to meet with State officials. Others played key roles over the coming months.

Milton Murray was a successful fund raising professional who had conducted capital campaigns for colleges and hospitals throughout the Americas. He wasted no time in soliciting the first pledge for the new hospital from Dan Allen, in the amount of $50,000. Allen dedicated his pledge in memory of his wife, whose life, he felt, might have been saved if a hospital had been nearby. Fred Cook, owner of a dye making company in town and hospital trustee, also agreed to make a pledge from his company, which amounted to $80,000, perhaps because he experienced a heart attack right after Murray's visit and had to travel seventeen miles of bumpy roads in an ambulance to the nearest hospital in Newton.

Iola Rice, as health chair of the PTA, was originally recruited for the building campaign by Bill Rossy of the Kiwanis Club. Rice particularly remembers working hand-in-hand with Betty Fowler, a Star-Gazette reporter, to approach "every single family in town for funds to build the hospital." And, she added, "We all have fond memories of a very, very rewarding time."

In May 1969, the United States Public Health Service awarded the hospital a grant of $500,000 under the Hill-Burton Act. With this grant, the Adventists' pledge of $1.25 million, and the overwhelming generosity of members of the community and area businesses and corporations, obstacles were surmounted and the project moved forward. Through pledges, grants, fund drives, the "Bucket Brigade" and other sources, amounts large and small poured in. The campaign depended heavily on small gifts of $100 and $200. And those contributions made up more than 41% of the monies raised.

The aforementioned "Bucket Brigade" was assembled to catch vacationing and weekend motorists driving through Hackettstown to the Poconos during the summer. Civic clubs, churches and community groups provided volunteers, sometimes dressed up in bandages or hobbling on crutches with "Help Our Hospital" signs, to staff the bucket brigade. By the first summer's end, they had collected more than $25,000, and after three summers -- over $100,000. Some motorists complained about the traffic delays that the coin toss caused, even suggesting that the state was holding up completion of Interstate 80 until the hospital was built. (Ironically, the hospital officially opened three days before the highway.) But others, especially truckers, felt the area needed a good hospital and gave every time they passed through town.

At last, just weeks after the death of Daniel Allen, the groundbreaking was held in August 1970. According to Hospital records, 5,000 people -- five times the number expected -- showed up for the hospital's opening ceremonies. On February 23, 1973, the doors of Hackettstown Community Hospital were opened to admit people to the long-dreamed-of 106-bed acute care facility.