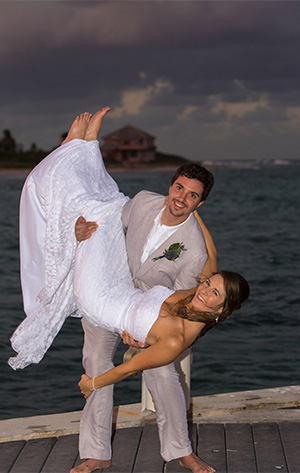 Ian A. had strapped on a parachute and climbed into an airplane at Sussex County Airport hundreds of times. Skydiving was his passion and he and his wife Linda F. were regulars at the airstrip on weekends and holidays.

But on July 4, 2019, the 33-year-old Ringwood resident was on his own. After completing two jumps earlier in the day, Ian and a group of friends got ready for the final skydive of the day.

When coming in to land after an otherwise good jump, something went horribly wrong, causing Ian to crash to the ground at 60-70 mph. The impact immediately fractured his right femur, shattered his pelvic ring and caused significant internal bleeding and shock.

Aviation accidents are normally minor or fatal – rarely in between – but Ian defied the odds and survived. He spent close to a year at Morristown Medical Center and credits the team members for their outstanding care.

“I don’t remember the impact or just before, but I remember being on the ground, being held still,” Ian says. “I remember being loaded into the Medevac helicopter, departing for Morristown, and I remember the bright lights and voices around me as I was initially being worked on. Then, the next thing I knew, it was late August.”

Many moments were erased from his memory. In addition, Ian experienced a classic case of post-intensive care syndrome where he imagined he was in Air Force flight training using supplemental oxygen. After each “flight,” he would remove his oxygen mask but, in reality, he was in the ICU tearing off his nasal tubes.

Kristin Ospina, RN, nursing director, Critical Care, explained that Ian was in a medically induced coma for a long time and needed countless procedures. “You don’t often hear about skydiving accidents having a positive outcome,” she says. “The teams put their heart and soul into his care. His outcome is so rewarding.”

Although Ian’s care team over the course of 300+ days in the hospital is too large to mention every name, his special thanks go to the teams in the Emergency Department, the ICU, the post ICU care team program, the entire team of trauma surgeons led by Louis DiFazio, MD, and the care team on Davino 1 and Deskovick 4. Volunteer Pete Martins, along with Louise Fordham Hale, lead patient care technician in the Emergency Department, whom Ian is now proud to call a “dear friend,” helped inspire Ian to get through, as well as his wife, and parents who traveled from Massachusetts.

“I was given extremely good care – the caretakers and trauma team were all exemplary and fantastic people who deserve every ounce of credit they are due,” Ian says. “An organization is only as good as its people, and Morristown Medical Center is a great example of that.”

Ian is now back to work as chief engineer at Breeze-Eastern Corporation, an aerospace company in Whippany. He still has a few mobility issues but is slowly working through them in rehab and outpatient surgeries and says he plans to resist the temptation to skydive again.