A Thank You 20 Years in the Making

Steven Sheris, MD, explains how a simple "thank you" has the power to motivate and inspire teamwork in health care.

Never miss a chance to say thank you.

That’s a lesson I’ve learned throughout my entire career, from my time caring for our men and women in the United States Navy, to my current position working with hundreds of providers throughout northern New Jersey.

More than just a recognition for a job well-done, saying “thank you” has the power to uplift, inspire and create comradery among team members. While this idea isn’t necessarily an original one, it is easily forgotten in today’s fast-paced world, where deadlines are everywhere, and there never seems to be enough time to reflect on the effort and commitment necessary to complete a mission. 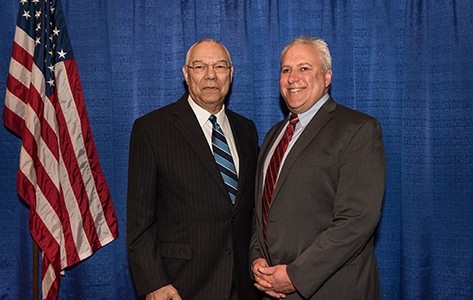 However, I recently had a chance to reflect and act on a situation that drove this point home for me, a realization that I hope will illustrate not only the power of “thank you” but the strength of character behind one of our nation’s most respected military leaders.

Approximately 20 years ago, while I was a cardiology fellow in the Navy at Bethesda, I had the opportunity to be part of a team that performed an emergency angioplasty on a high-ranking member of General Colin Powell’s staff. At the time, General Powell was the Chairman of the Joint Chiefs, the highest ranking military officer in the nation.

General Powell was a notable exception. After we cared for the individual on his staff, the General took the time to personally inscribe his official photograph and send them to all the members of the care team. Not just the doctors, but also the nurses, the corpsmen, the admin staff. I still have the picture in my office to this day – it’s inscribed:

“Dr. S. Sheris, thank you for saving a friend’s life.”

It didn’t matter whether you were the attending, the fellow, or a corpsman – everyone received the same inscribed photograph. Perhaps a bit exaggerated in characterizing the procedure we performed, but the fact that he took the time to acknowledge those of us who were on the “front lines” of medical care was not lost on me.

I recently had the opportunity to retell that story to General Powell at a recent American Hospital Association meeting, allowing me to close a career loop. I told the General “Thank you for saying thank you to my corpsmen”, as it reminds me to always acknowledge my team, and to look out for their welfare, because for sure, great outcomes depend on our collective efforts.

We sometimes forget that the mere act of saying “thank you” to teammates is what humanizes us and sustains us through all our daily challenges. The way General Powell deliberately extended his appreciation to all the members of our team was significant. It reminds me to be humble at all times, that it takes each and every one of us working together and being on top of our game in order to do what we do. As he says, “there is no end to the good you can do if you don’t care who gets the credit.”