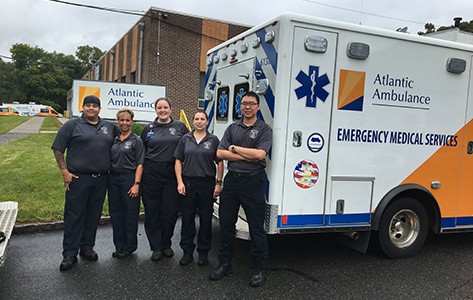 As Hurricane Dorian, officially one of the most powerful storm recorded, ravaged the Bahamas and threatened the southern coastline of the United States, a team of five paramedics from Atlantic Mobile Health, the medical transportation division of Atlantic Health System, headed southward on Monday, September 2 to assist the anticipated relief effort.

The team, which reached a staging area in South Carolina, will likely be on a seven- to 14-day activation, but will stay in the area as long as needed. They will be working under the guidance of FEMA, state and local EMS agencies.

For Vitale and Chiang, this is their second deployment, having travelled as part of a team from Atlantic Mobile Health to the relief effort for Hurricane Florence last year.

“The team at Atlantic Mobile Health are the kind of first responders who head toward challenges to help others,” said David Ferguson, director of Atlantic Mobile Health, which includes Atlantic Ambulance. “They do so every day in the communities we regularly serve, and when they get the chance to do so beyond this area, it is a special privilege.”

American Medical Response (AMR) is FEMA’s prime emergency medical service response provider and has a national agreement with FEMA to provide ground ambulance, air ambulance, paratransit services and non-ambulance EMS personnel to supplement the Federal and Military response to a disaster, an act of terrorism or any other public health emergency.