Brian Gragnolati is President & CEO of Atlantic Health System. He is also former Chairman of the Board of Trustees of the American Hospital Association (AHA), dedicated to leading, representing and serving hospitals and health systems in their work to advance the health of individuals and communities.

A nationally respected voice in health care, Brian is a frequent speaker at events such as the Aspen Ideas Health Conference, SXSW (South by Southwest) and the International Hospital Federation’s World Hospital Congress. He regularly appears on CNBC, MSNBC and Bloomberg Radio, sharing his experience and insight on the nation’s most pressing health care concerns. He was honored by Modern Healthcare as one of the 100 Most Influential People in Healthcare and selected by Governor Phil Murphy for both the Office of the Governor’s COVID-19 Restart & Recovery Advisory Council and Professional Advisory Committee.

Prior to his tenure at Atlantic Health System, Brian served as Senior Vice President, Community Division of Johns Hopkins Medicine and President and CEO of Suburban Hospital. He previously held executive positions at WellSpan Health, the Medical Center Hospital of Vermont and Baystate Medical Center in Springfield, MA.

Brian holds a bachelor’s degree in Health Systems Analysis from the University of Connecticut, an MBA from Western New England College and an Executive Leadership Certificate from the JFK School at Harvard University. He is a member of the Boards of Directors of Lakeland Bancorp, Inc. (NASDAQ:LBAI) and Lakeland Bank, which supports the community with an extensive branch network and commercial leading centers throughout New Jersey and Highland Mills, New York. He and his wife, Donna, live in Madison, New Jersey. 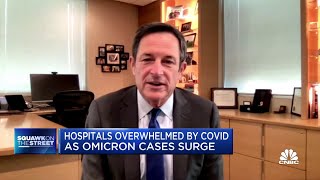 "Squawk on the Street" interviews Brian Gragnolati on changes in Covid testing and how vaccine mandates are affecting hospitals.