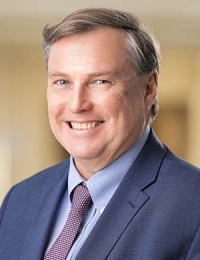 Atlantic Health System’s position of financial strength despite the enormous uncertainty and challenges health care providers have faced in recent years is in large part thanks to the expert guidance of Kevin Lenahan. Since he became CFO in 2010, our organization has grown to more than $2.7 billion in annual revenues and today employs more than 16,000 people in New Jersey.

Under Kevin’s leadership, Atlantic Health System in 2018 maintained its rating with Moody’s, which a year earlier upgraded the organization to Aa3 with a stable outlook – the first health care institution in NJ to achieve such rating. This upgrade occurred amidst Moody’s overall negative outlook on the Healthcare Sector. In addition, S&P gave Atlantic Health System an AA- rating with a stable outlook, the highest health care system rating in the state.

This solid financial performance provided the foundation for several recent initiatives, such as the Atlantic Alliance, a Clinically Integrated Network (CIN) that will simplify collaboration between our health system and independent practitioners and other health systems in northern and central New Jersey. It also paved the way for the Healthcare Transformation Consortium, in which Atlantic Health System and six other health systems joined forces to enhance health benefits for their employees by improving access to care and reducing costs.

Additionally, Kevin played a key role in Atlantic Health System’s investment in Epic, an electronic platform that creates a single online health record for individual patients and empowers them to share it with their physicians and care team. Epic became available at all of our physician practices, ambulatory facilities and medical centers in 2018.

These achievements have not gone unnoticed. Kevin received CFO of the Year from NJBIZ in 2013, followed by CFO Studio’s Innovation Award in 2016 and Excellence Award in 2018. Becker’s Hospital Review also named him to their list of Health System CFOs to Know in both 2017 and 2018. Along with overseeing its fiscal health, Kevin also supports initiatives that strengthen the cultural and ethical spirt of Atlantic Health System. In 2019, Kevin was awarded the Corporate Leadership Award from STOMP Out Bullying, for his commitment to supporting diversity and inclusion throughout Atlantic Health System.

Prior to becoming CFO, Kevin served as Atlantic Health System's corporate director of accounting/budget and reimbursement.