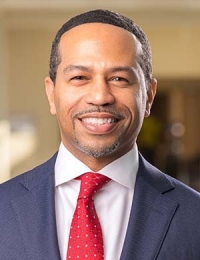 Armond Kinsey is the Vice President and Chief Diversity Officer at Atlantic Health System, where he’s charged with leading a transformational agenda to infuse diversity and inclusion throughout the organization.

In this role Mr. Kinsey guides, integrates, monitors and evaluates diversity and inclusion efforts across Atlantic Health System to ensure they are in alignment with the mission and priorities of the organization. In partnership with leaders from across Atlantic Health System, he works closely on efforts such as diversity and inclusion strategy, diversity recruitment and retention efforts, diversity council, supplier diversity, corporate social responsibility as well as a myriad of other initiatives aimed at reducing healthcare disparities and supporting the recruitment, retention and development of 17,000 employees.

Prior to joining Atlantic Health System, Mr. Kinsey served as the Chief Diversity Officer at Kaiser Permanente, Mid-Atlantic States, where he oversaw equity, inclusion and diversity efforts for the region. His vast experience also includes having worked for Korn Ferry International, The Children’s Hospital of Philadelphia and The Vanguard Group of Investment Companies. Over his career, Armond has produced several policies, practices and programs that aided in those companies being listed as premier organizations for diversity an inclusion, including being listed in the DiversityInc. Hall of Fame.

Mr. Kinsey has led panels and/or keynotes at numerous organizations and conferences including National Black MBA, Linkage Inc., University of Pennsylvania and The Society for Human Resource Management.

Originating from Philadelphia,, Mr. Kinsey received his education from Millersville University and Villanova University and continues to be engaged in committees at both universities. He’s a member of The National Association of Health Services Executives and he’s also on the board (and past president) of the Sickle Cell Foundation at The Children’s Hospital of Philadelphia. When not working, Mr. Kinsey enjoys traveling, photography and spending time with his family.