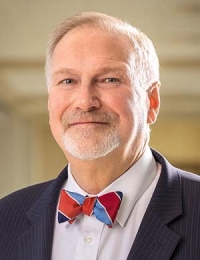 Certified by the American Board of Internal Medicine, John R. (Jack) Audett, MD strives to improve quality and patient safety each day at Overlook Medical Center. He has extensive experience in administrative medicine, serving as Chief Medical Officer for Kent Hospital in Warwick, RI and Inova Alexandria Hospital in Alexandria, VA before joining Atlantic Health System in the same role.

Previously, Dr. Audett spent three years working in a Federally Qualified Health Center in Warwick, RI as a staff internist. He later opened a private practice in internal medicine there.

Dr. Audett has a Bachelor of Science Degree from the University of Connecticut, where he graduated summa cum laude with Honors in Biological Sciences and membership in Phi Beta Kappa and Phi Kappa Phi. He subsequently obtained a medical degree from St. Louis University and completed his residency in internal medicine there. During his final year of residency, he served as chief resident at St. Louis City Hospital. Additionally, Dr. Audett obtained a Master’s Degree in Business Administration from the University of Rhode Island with membership in Beta Gamma Sigma and is a Certified Physician Executive by the Certifying Commission in Medical Management.

A Fellow of the American College of Physicians and member of the American Association for Physician Leadership, Dr. Audett has published several articles on quality and safety in the management of sepsis.

He resides in Livingston, NJ with his wife Ellen and cherishes time spent with his children and grandchildren. Finally, no one looks better in a bow tie.