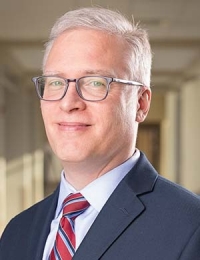 Terence French, Vice President and Chief Strategy Officer at Atlantic Health System, is responsible for supporting the future growth agenda for Atlantic Health System and strengthening our network relationships while collaborating on a system-wide strategic plan to best operationalize our Trusted Network of Caring.

Terence is an accomplished executive with 20 years of success in operations, strategy, and public policy for hospitals and health care systems and as a senior New Jersey state government official.

Throughout his career, his leadership has translated into improved organizational operations as he worked with leaders to develop a shared vision for success, implement complex initiatives, and grow organizational talent.

Terence joined Atlantic Health from Urban Health Institute (UHI) in Roseland, where he has served as vice president. ln this position he has facilitated and led engagements with health care executives and physician practices throughout New Jersey and the tri-state area to drive growth strategies, conduct operational and facility reviews and support performance improvement initiatives.

Prior to UHl, Terence spent nine years at Saint Michael's Medical Center and its affiliates, managing operations and physician relationships during a period of institutional change.

A graduate of Trenton State College and with a master's degree in public policy from Eagleton lnstitute at Rutgers University, Terence has spent his career in New Jersey, even serving as chief of staff for the New Jersey Department of Health and Senior Services from 1999 to 2002. His role in the governor's office increased in scope and responsibility over a span of 10 years for the administrations of Gov. James Florio, Gov. Christine Todd Whitman and Acting Gov. Donald DiFrancesco.