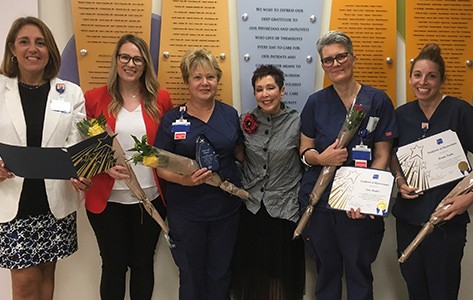 The team at the Overlook Ostomy Center at Overlook Medical Center was honored on Tuesday, August 20, with a “Gift of Gratitude,” from a longtime patient and ostomy advocate.

Ellyn Mantell, of Watchung, made the Gift in recognition of the ostomy team’s excellence in ostomy care as well as support for ostomy patients. She presented it to the team at a regular meeting of Overlook’s management team.

“We are so fortunate to now have the opportunity to not only meet the needs of our hospitalized ostomy patients but also to be able to meet the needs of an underserved population in our communities,” said Angela Natale Ryan, BSN, RN, CWON, a nurse clinician at the center.

Mantell is among the generous donors in the Overlook community, who has contributed to the hospital and specifically to the program through the Overlook Foundation, a non-profit organization that supports the hospital’s efforts to remain on the forefront of medicine. “Gift of Gratitude” is a program by the Foundation through which patients, visitors, family members and donors can recognize caregivers throughout Overlook for their exemplary service, or simply in thanks for their positive experiences.

“Overlook is my place and the Foundation has been a way for me to say thanks over the years,” Mantell said.

Mantell shared her own experiences as an ostomy patient at Overlook with the audience. Following an operation to treat a gastrointestinal issue, Mantell required an ostomy, a surgery that creates a stoma, or an opening on the abdomen created to allow an alternative way for waste to leave the body.

Following her ostomy, Mantell said that she, like many ostomy patients, found some difficulty in adjusting to life changes that ostomy can bring. She enthusiastically joined the Ostomy Support Group that Overlook created more than 20 years ago and has helped the group grow to become a valued resource to many of the ostomy patients Overlook treats each year.

Mantell was also instrumental in guiding the creation of Overlook’s Wound and Ostomy Center, which opened in June 2018, providing a dedicated space for ostomy patients as well as the support group. Since its opening The Ostomy Center has cared for more than 500 patients.

When Overlook was invited to become part of the National Ostomy Association of America, and needed a president, Mantell gladly volunteered.