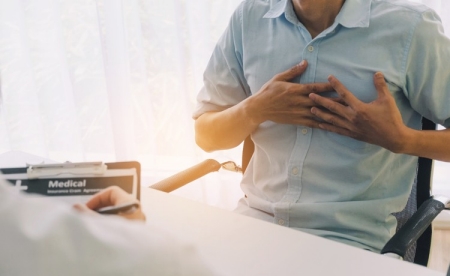 You wake up and feel some tightness in your chest. You think it will go away. But five minutes later, you also feel like you can’t breathe. You know you’ll need medical help fast. But is it better to drive yourself to the nearest emergency department or call 911?

“When in doubt, always call 911 and get checked out,” says Dina Tortorelli, the manager of cardiovascular services at Atlantic Health’s’ Chilton Medical Center.

Many people think they can get to the closest hospital faster by driving themselves, or by having a spouse, relative or friend drive them. But traveling by car actually increases your risks for poor health outcomes in many ways.

“Bad things can happen in cars,” Tortorelli says. “If you’re driving yourself to the hospital and your condition worsens, you could pass out and cause an accident. If someone is driving you, you could become unresponsive, and you won’t be able to get any medical help until you arrive at the hospital—or until the paramedics find you.”

“With a heart attack, time is muscle,” says Sherry Cicero, RN, Nurse Manager in the Cardiac Catheterization Laboratory at Atlantic Health’s Morristown Medical Center. “Mere minutes can significantly reduce the amount of heart muscle that will die due to a lack of blood flow to the heart.”

A review of patient cases at Atlantic Health System shows that heart attack patients who call 911 get treatment an average of 30 minutes faster than those who drive themselves to the hospital.

What happens when you call 911

When you call 911 from anywhere in New Jersey and report symptoms of a heart attack, trained providers in Basic Life Support and Advanced Life Support will get to you as soon as possible and begin treatment upon arrival at your home.

“Our paramedics will perform a 12-lead electrocardiogram (EKG), a non-invasive test that can identify a heart attack, arrhythmias and other cardiac issues,” says David Petersen, Director of Clinical Quality for Atlantic Mobile Health, which provides pre-hospital ground and air transport for a wide range of needs.

If an EKG determines that you’re having a heart attack, paramedics will then administer medications, start an intravenous line and take additional steps to start saving your heart muscle. They will also respond quickly in the ambulance should your condition worsen on your way to the hospital.

The pre-hospital care team will stay in constant communication with in-hospital providers while en route. “We’ll talk directly with your Emergency Department physician and explain your condition in detail so they can get whatever resources they need—such as a cardiac catheterization lab team—ready before you arrive,” Petersen says.

You should call 911 as soon as you experience symptoms of a potentially serious heart problem. “Any pain from your belly button to your nose could be cardiac-related,” Petersen says.

While some people experience classic symptoms of a heart attack, such as feeling like an elephant is sitting on your chest, other people may have less severe symptoms, such as jaw, shoulder or arm pain, nausea or vomiting. “Women and people with diabetes tend to report symptoms less severe than men and put up with those symptoms longer,” Tortorelli says.

Don’t make the mistake of thinking that heart attack pain is all-or-nothing. “In some cases, the pain can come and go over a few hours or even a few days,” Cicero says.

No matter the exact symptoms, “if you suspect a heart attack, don’t attempt to drive to an ER or Urgent Care. Call 911 right away.” Petersen says. “The sooner you do, the better your outcome will be.”