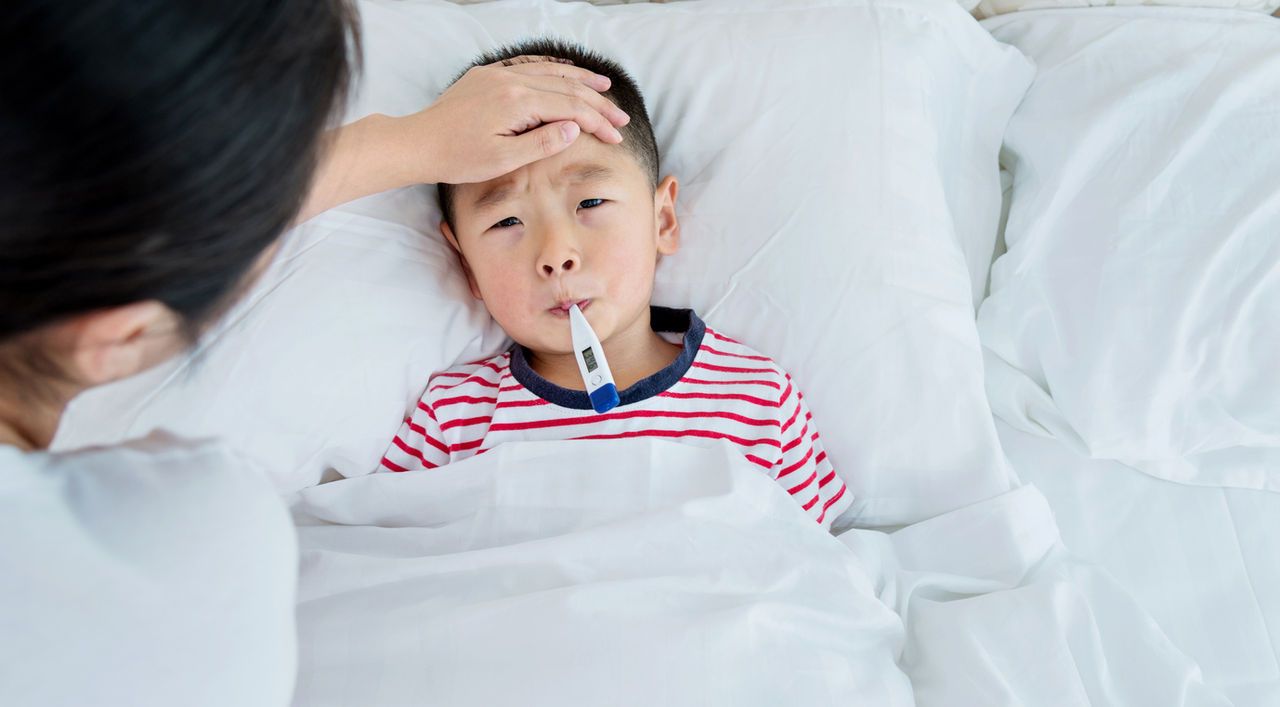 Should parents expect a tridemic this fall and winter?

First, there was the COVID-19 pandemic. Then we faced a “twindemic” in the Fall of 2021 when a surge in COVID cases coincided with flu season. Now, as hospitals report an uptick in cases of COVID, the flu and respiratory syncytial virus (RSV), the United States may be facing a “tridemic.” That may be the last thing you want to hear, but the good news is you can take steps to protect your family from these illnesses.

Aspasia Katragkou, MD, a physician with the Division of Pediatric Infectious Diseases at Atlantic Health System’s Goryeb Children's Hospital answers some common questions about these illnesses.

Where do these diseases come from?

All three of these illnesses are caused by viruses that infect the respiratory tract. All are contagious and can spread quickly through contact with respiratory droplets from an infected person who coughs or sneezes. And they lead to some similar symptoms, including sore throat, cough, runny nose and fever. So, it can be challenging to tell them apart.

The viruses that cause flu and RSV usually occur in the late fall through early spring months. The 2022 flu and RSV seasons started earlier this year than in the past, probably because people have eased off on pandemic-related precautions (such as mask-wearing and social distancing). Thankfully, all three illnesses usually cause mild symptoms, and people recover well on their own. However, it’s a good idea to understand the differences between these illnesses, when to seek medical help and what you can do to protect yourself and your family. 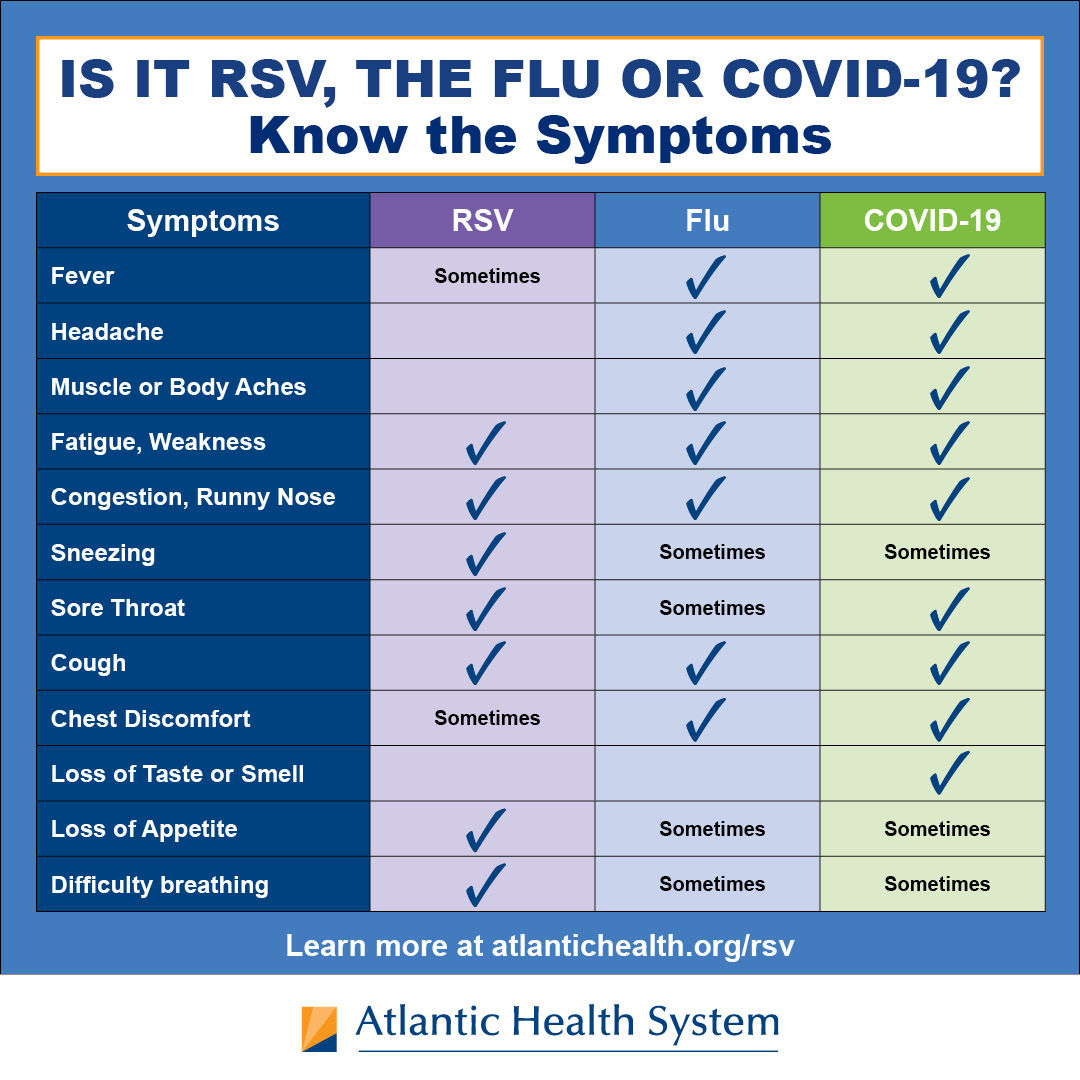 Most children get RSV at least once by the time they turn two. RSV is one of the most common causes of childhood illness and the leading cause of hospitalization in infants under age one. RSV can affect adults, too.

RSV usually starts like a cold, causing a runny nose, cough and sneezing. Children may be fussy or lose their appetite.
However, some people are at higher risk for severe symptoms, which can lead to pneumonia (lung infection) and bronchiolitis (an infection in the small airways in the lung). These people include:

More severe symptoms in children can include cold symptoms plus issues related to breathing, such as wheezing, “belly breathing,” rhythmic grunting and head bobbing during breathing.

The flu and COVID-19: A quick review

Most people are more familiar with the flu and COVID-19 than with RSV. These two conditions share many symptoms, including fever or feeling feverish/chills, cough, shortness of breath or difficulty breathing, tiredness, sore throat, runny or stuffy nose, muscle pain or body aches, headache, vomiting and diarrhea. The one symptom unique to COVID-19 is a change in or loss of taste or smell.

Both COVID-19 and the flu can result in severe illness and complications. People at the highest risk include older adults, people with certain underlying medical conditions and pregnant women.

What should I do if my child is sick?

If your child exhibits mild to moderate symptoms of these illnesses, keep them home to prevent others from getting sick. Give your child fluids, rest and over-the-counter pain or fever reducers, as needed. As a parent, it’s essential to trust your instincts: call your child’s healthcare provider if you have concerns. The following symptoms may warrant a call:

How can I protect my kids from getting these viruses?

Getting the flu shot and keeping up to date on COVID vaccines and boosters are the best ways to protect your family from contracting these viruses or developing severe symptoms. Unfortunately, there is no vaccine to prevent RSV—although several pharmaceutical companies are working on developing one. Everyone can help prevent the spread of these viruses by following the guidance we learned during the COVID-19 pandemic:

And remember: if your child becomes ill and you are worried, seek help. Your child’s healthcare provider is likely very familiar with these conditions and will make sure your child receives the care they need. 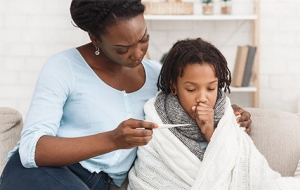 RSV In the Community

The Centers for Disease Control and Prevention are reporting an increase in cases of respiratory syncytial virus (RSV) and RSV-associated emergency department visits and hospitalizations. Learn more > 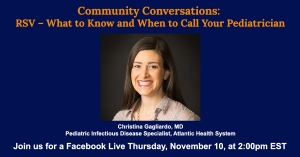 RSV and other seasonal viruses are spreading like wildfire. In to our next Facebook Live, a pediatric infectious disease specialist will answer questions about what symptoms to look for and when to bring your child to the doctor. Watch > 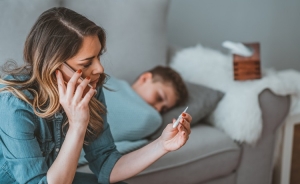 How can you protect your children and your family from RSV? What steps do you take if your child gets it? How do you know when to see a doctor? Get the answers from an Atlantic Health physician expert. Learn more > 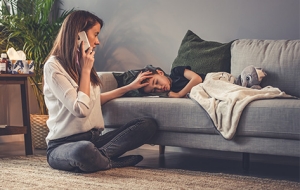 A Doctor Answers Your Questions About Rhinovirus and Enterovirus

It’s cold season and every cough and sniffle has parents wondering what their child is coming down with and how to handle it. Atlantic Health System doctors share everything parents need to know about rhinovirus and enterovirus and how to keep kids healthy. Learn more > 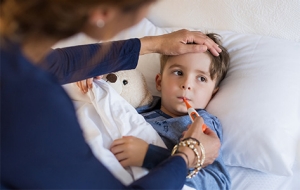 What Every Parent Needs to Know About the Flu this Season

It’s cold season and every cough and sniffle has parents wondering what their child is coming down with and how to handle it. Atlantic Health System doctors share everything parents need to know about rhinovirus and enterovirus and how to keep kids healthy. Learn more >