Tenacity, Hard Work and Cooperation Get the Spotlight as Overlook Celebrates its Team Members

Long Hill TWP, NJ – As he stood before a room full of colleagues from Overlook Medical Center, George Adzanu listened with quiet pride as his story was told.

It was a story about how George, a patient care technician in his native Ghana, came to America seeking a better life, despite not having a position in his chosen field available to him when he arrived. Undeterred, he took a different one – an attendant in Overlook’s parking lots – and waited patiently until a better one came along.

Now in the position for three years, Adzanu had not only found his way back to the work he loved, but was being celebrated for it, in style, at the hospital’s annual Clinical Excellence Awards, where he was one of 20 Overlook team members and care teams who received awards for going above and beyond their duties. The event was held at the Primavera Regency in Stirling.

“I am so grateful for the chance to prove myself,” Adzanu said humbly. “I am so privileged to be here today.”

Ruggiero couldn’t have been prouder as she recalled interviewing Adzanu for the position.

“Patient care is his passion,” said Ruggiero, RN Director, Critical Care Services. “If we had more people like George, the world would be a better place.”

In addition to his colleagues, Adzanu was also joined at the event by members of his family, who joined him in 2017 in the U.S., eight years after he first arrived – his wife, Cynthia, who also now works at Overlook as an environmental aide working in the ICU, and two of his three sons, Emmanuel, 10, and Kelvin, 6. His eldest son, Benedict, 21, was unable to attend as he was in training, preparing to join the U.S. Army.

“We are, really, the American dream,” Adzanu said later that evening.

The awards are given in categories, such as the one Adzanu shared with three others who received the Patient Care Partner Award. Six nurses were honored in that category, and four physicians. The Allied Health Award honored four more individuals, including pharmacists, a respiratory therapist and a member of the cardiology team.

One of the presenters, Samantha Pozner, MD, president of Overlook’s medical and dental staff, noted that the awards underscored how important each specialty is to the care at Overlook.

“Whatever we do, as part of this medical center, matters and is important,” Pozner said. “We can all help a patient or family member have a positive experience.”

In addition to on-stage praise from Eric Whitman, MD, Medical Director, Atlantic Health System Cancer Care, Lee Starker, MD, PhD. a general/oncologic surgeon at Overlook, was presented one of the night’s Physician Awards by another longtime fan of his achievements – his father, Paul, who is chair of the department of surgery at Overlook.

The “elder Starker” as he is known by some in the hospital, enumerated the younger surgeon’s litany of academic, medical and research accomplishments, before sharing some recollections of his son growing up that demonstrated attributes critical to excellence in surgery.

“When Lee was around 10, I was going on a business trip and as I was coming down the stairs my suitcase ripped. He immediately got a needle and thread and stitched it back together. I knew then the kid had potential,” Paul Starker said, alluding to Lee’s technical excellence.

On perseverance: “He was entering his sophomore year in high school when he decided to switch from basketball to hockey. He needed to learn to skate and stick handle and didn’t have much time to do it,” Starker recalled. “I tried to dissuade him but he dug in and took lessons and practiced and by senior year he was a starting defenseman and co-captain at Summit High.”

And finally, on compassion, the elder Starker told of when Lee was a third year med student in Brooklyn. “He was assigned to a patient with a terminal diagnosis. He spent the time explaining the disease and the options of treatment and helped that patient make the difficult choice of how he wanted to spend the final days of his life.”

"So long ago, way back then, I knew that one day, we'd be here,” he said before embracing his son and presenting him with the award.

Overlook president Alan Lieber presented awards to two care teams at Overlook. The President’s Award for Heroic Care was presented to Overlook’s Maternity Center care team for their work in treating a woman who experienced a serious condition following childbirth.

“The team was exceptional - across units, specialties, and quite literally across the hospital,” said Fran Drigun, RN, executive director of Women’s Services for Atlantic Health System, who accepted the award.

Lieber also presented the Team Award to the COPD Readmission team, which in 2018 drastically reduced readmissions of COPD patients to Overlook through a multi-faceted approach that involved bedside education, follow-up care after discharge, and coordination with nurses, respiratory therapists, pharmacists, residents and hospitalists.

In fact, through the team’s efforts, Overlook had several months in 2018 with zero COPD readmissions.

“This team’s work across the care continuum and departmental lines, and their fierce commitment to quality improvement shows how coordination results in better patient outcomes,” Lieber said. “They have set an example for other teams to emulate throughout Overlook.” 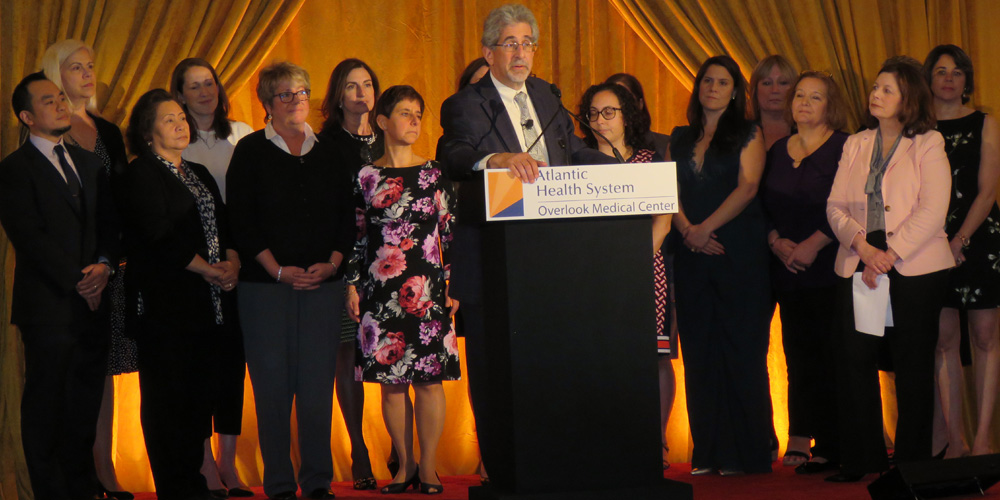 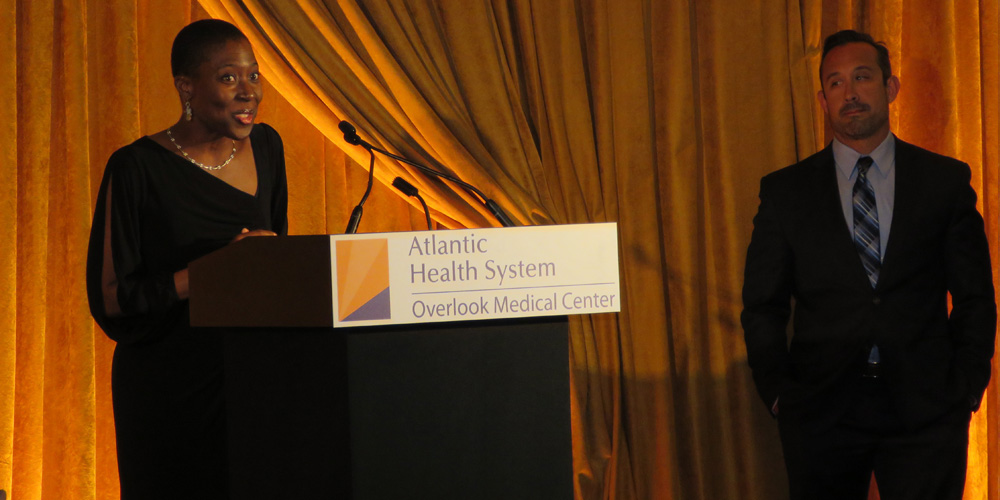 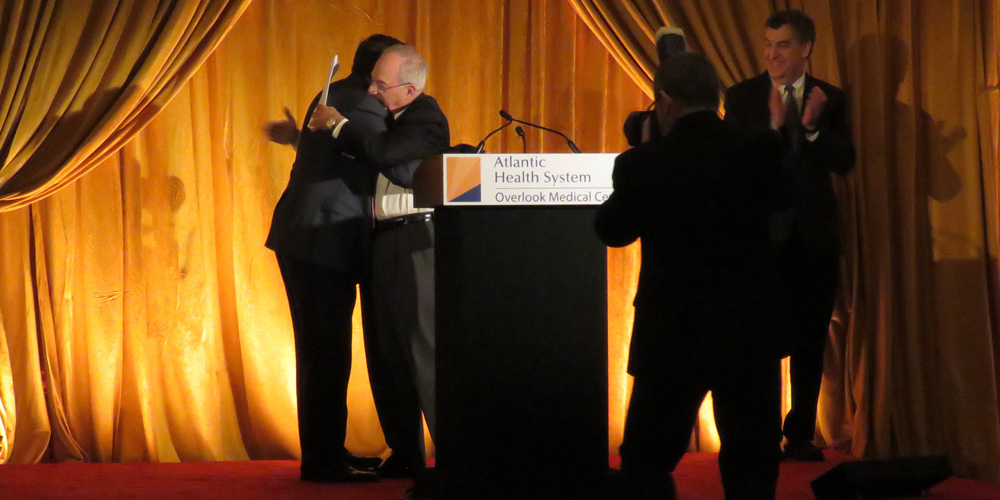 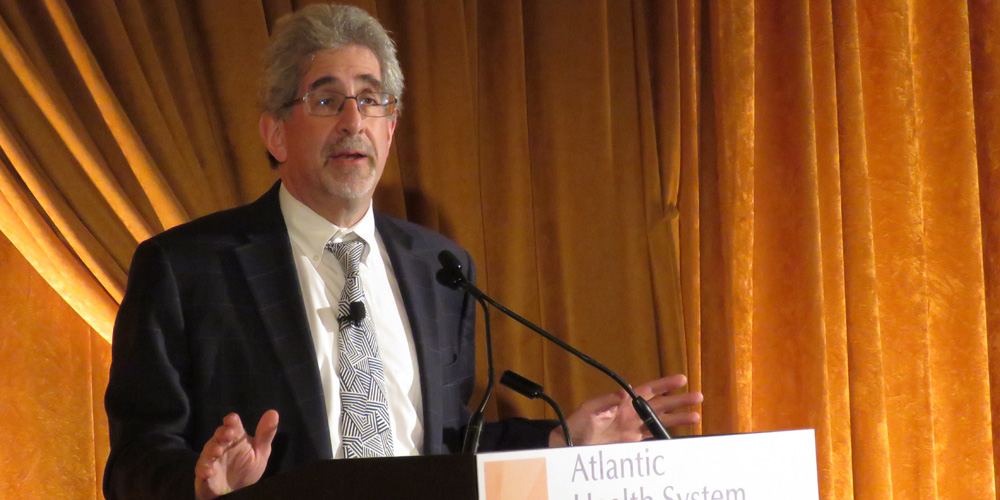 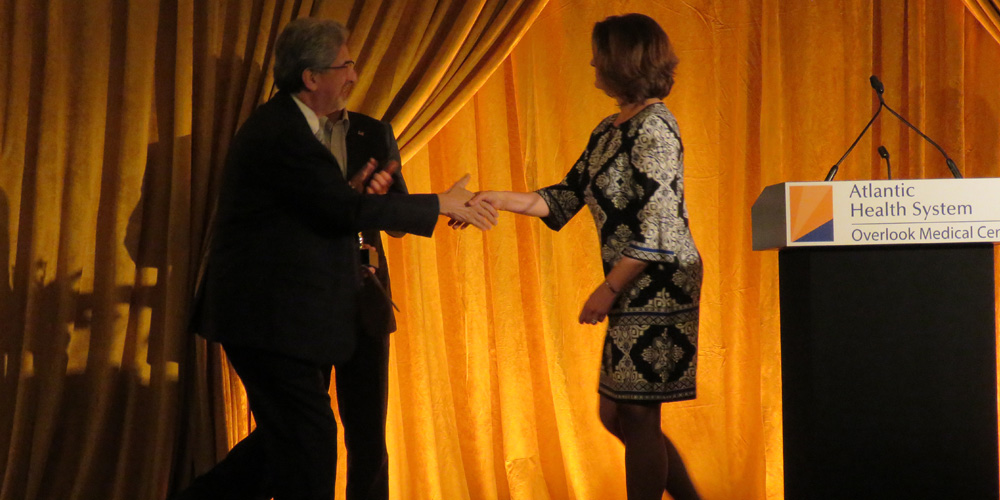 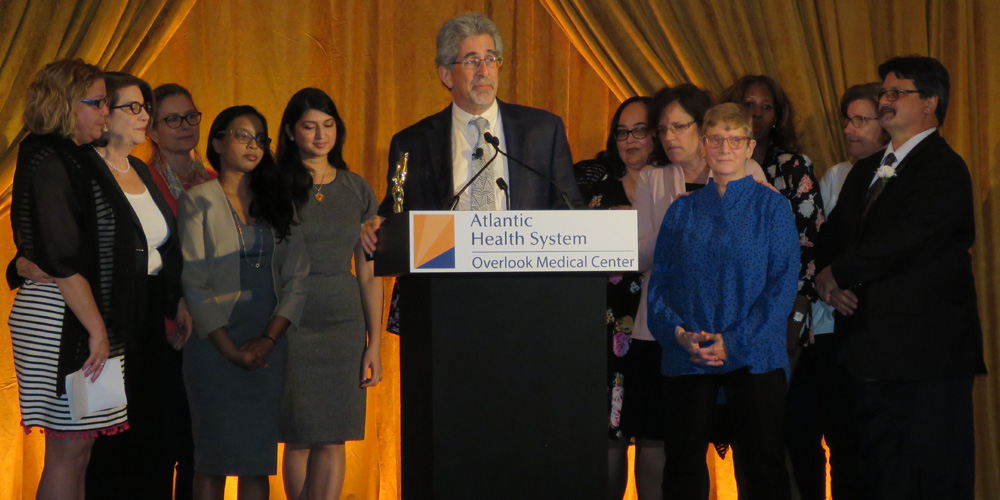 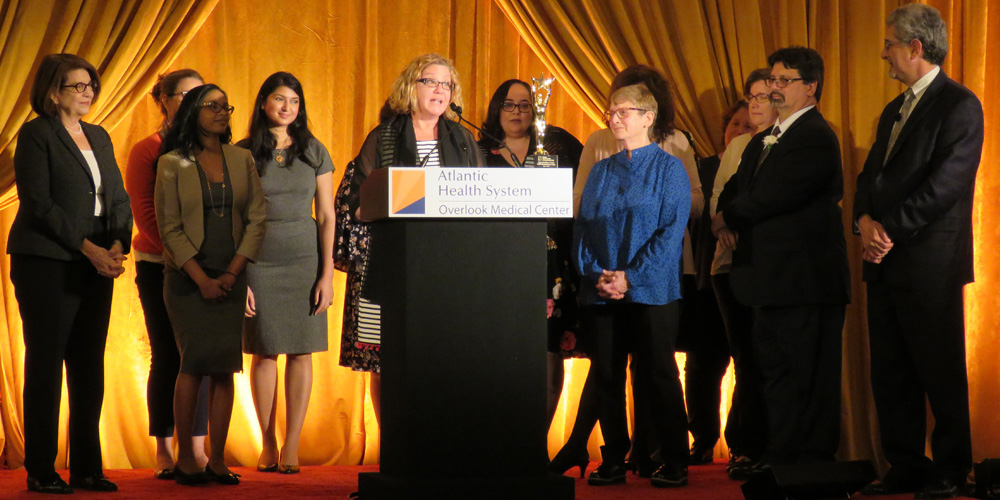 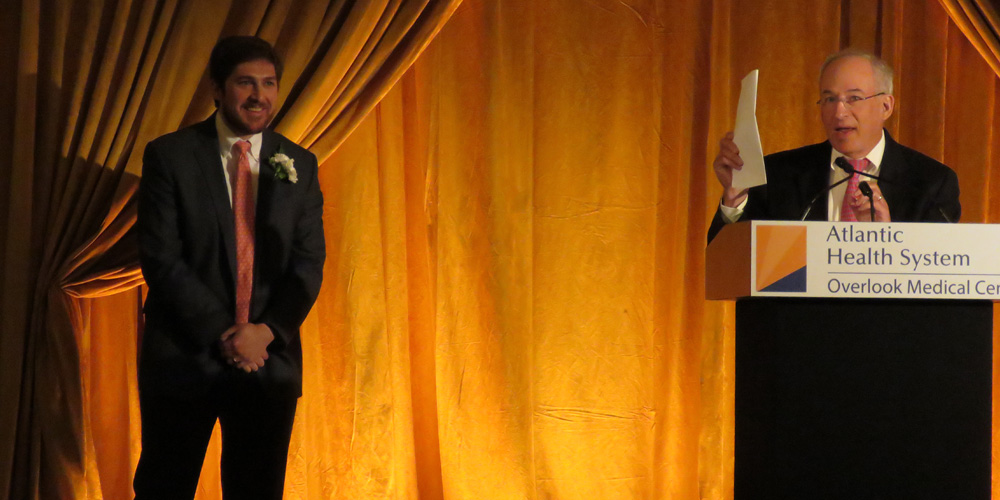 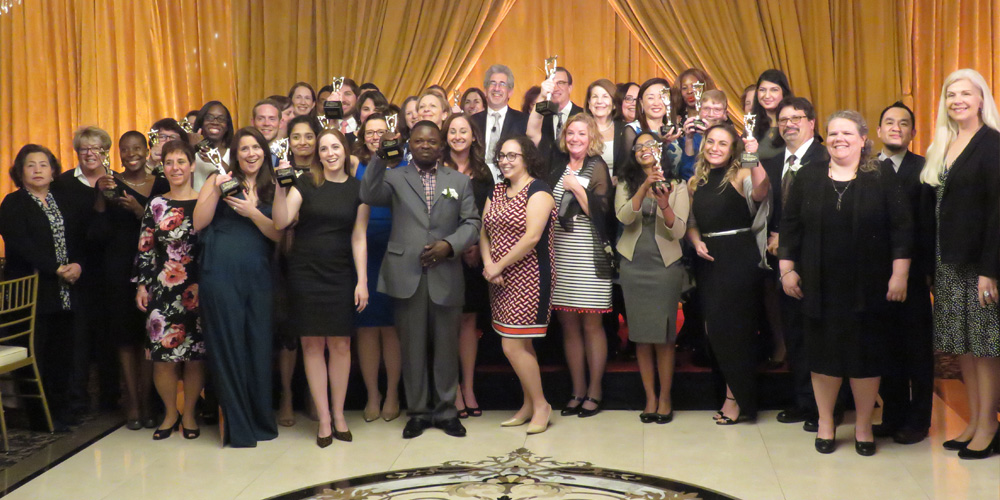 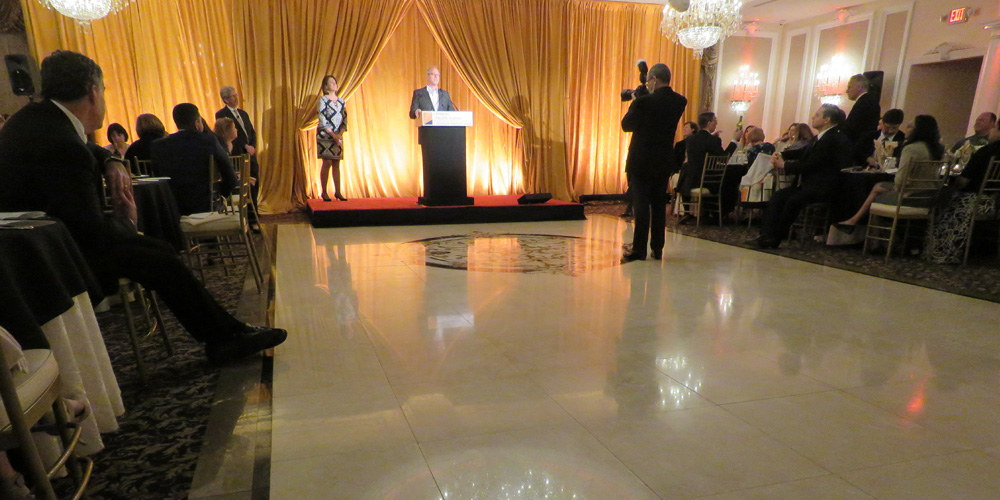 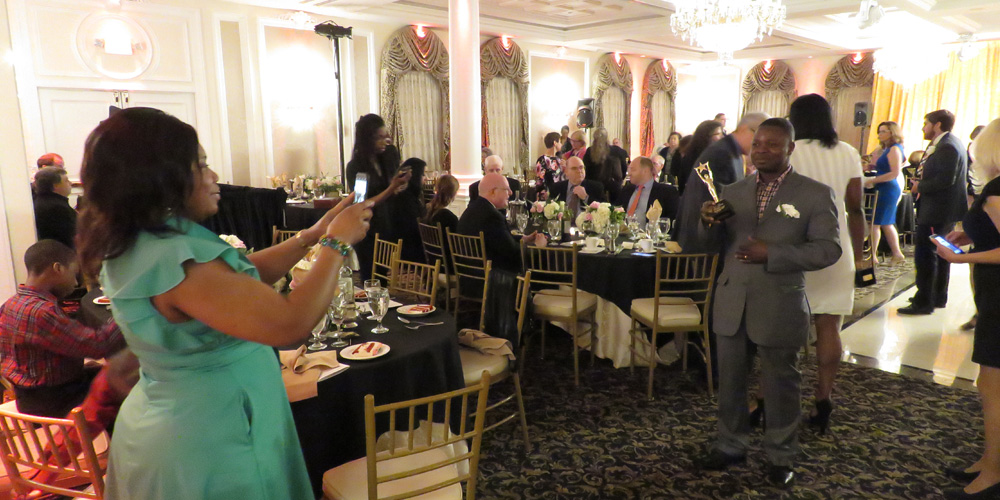