January 18, 2019, Morristown, NJ – Atlantic Health System is proud to announce that Robert E. Mulcahy III was named 2019 Health System Trustee of the Year by the New Jersey Hospital Association. The Trustee of the Year honor, one of the Healthcare Leader Awards bestowed annually by NJHA, recognizes outstanding volunteer hospital and health system trustees for their commitment to patients and communities.

“Bob embodies the very best that healthcare has to offer, in that he cares so deeply about doing the right thing and putting our patients first,” said Brian Gragnolati, President and CEO, Atlantic Health System. “He spent a long and fascinating career in public service building relationships and bringing people together, and has spent more than a decade at Atlantic Health System putting others before himself. I congratulate him on this much-deserved recognition.” 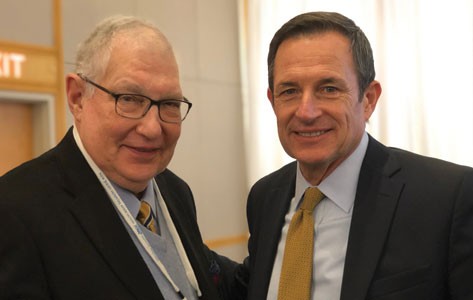 Along with serving on the Atlantic Health System Board of Trustees, Mulcahy served on its committees for governance and medical staff leadership and development. He was chairman of Overlook Medical Center’s Community Advisory Board for six and a half years, where he was integral in the development of Atlantic Neuroscience Institute, a center of excellence in the delivery of cutting-edge care for stroke, brain tumors, and other movement disorders.

In addition to the employed workforce, Atlantic Alliance, a Clinically Integrated Network, represents more than 2,500 health care providers throughout northern and central NJ. Atlantic Health System leads the Healthcare Transformation Consortium, a partnership of six regional hospitals and health systems dedicated to improving access and affordability, and is a founding member of both the PIER Consortium – Partners in Innovation, Education, and Research – a streamlined clinical trial system that will expand access to groundbreaking research across six health systems in New Jersey and Pennsylvania and AllSpire Health Partners, a consortium of five leading health care organizations dedicated to serving patients, families and communities in New Jersey, New York, Maryland and Pennsylvania.