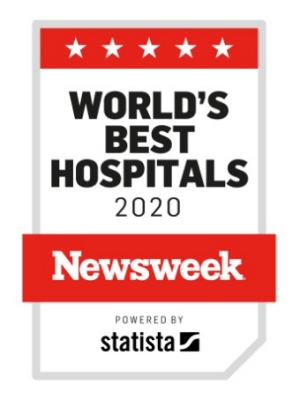 MARCH 6, 2020 – MORRISTOWN and SUMMIT, NJ – Atlantic Health System’s Morristown Medical Center and Overlook Medical Center have been named among the World’s Best Hospitals by Newsweek for the second year of the publication’s ranking.

The World’s Best Hospitals 2020 ranking is based on responses to an online survey sent to nearly 70,000 doctors, hospital administrators and health care professionals in 21 countries. Every hospital in each country was rated by a score, which is based on recommendations from medical experts, available hospital performance data and existing patient satisfaction, such as results from patient surveys.

“I am so proud that Morristown Medical Center is being recognized on a global scale for our ongoing focus on delivering the highest quality medical care for our patients,” said Trish O’Keefe, PhD, RN, president, Morristown Medical Center. “We continue to drive innovation including the latest technology and clinical trial offerings and provide highly collaborative patient care resulting in positive experiences.”

“The Overlook Medical Center team is committed to giving their best every day – the best care, the best patient experience, and the highest quality,” said Alan Lieber, president, of Overlook Medical Center. “For a second year in a row, this international recognition is a clear signal to the communities we serve that our best is indeed the best, the world over.”

The data was collected by Newsweek and Statista, in collaboration with GeoBlue, during an initial survey period from September to November 2019. The survey was also promoted on newsweek.com.