Meningiomas are typically non-cancerous (benign), slow-growing tumors that arise from the membranes (meninges) surrounding the brain and spinal cord. These tumors are relatively common – comprising 30 percent of all primary brain tumors – and are most often seen in middle-age women. Meningiomas can appear in any portion of the lining of the brain and spinal cord. A small minority of meningiomas are cancerous (malignant). 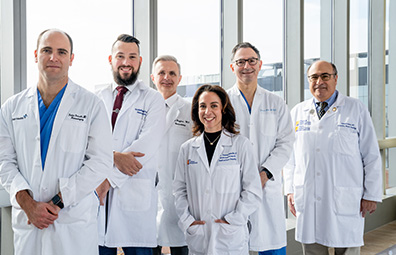 Meet the specialists at the Gerald J. Glasser Brain Tumor Center who are experts in treating meningiomas.

Convexity and parasagittal meningiomas - tumors that arise from the membranes (meninges) over the side and top of the skull. Some of these tumors grow into or compress the superior sagittal sinus, a large vein coursing over the center of the head.

Falcine meningiomas - tumors that form in or next to a very thin extension of membrane (falx cerebri) that courses between the two sides of the brain.

Olfactory groove meningiomas - tumors that arise from the membranes at the bottom of the skull, above the nose. They can cause only loss of smell or more significant neurologic impacts like personality changes and cognitive difficulties.

Sphenoid wing meningiomas - tumors that arise from the membranes over the bone that spans from the side of the head behind the eye toward the center where the optic nerves and pituitary gland are located. Depending on location, they can cause seizures, brain disturbance, visual loss, double vision or numbness of the face.

Skull base meningiomas – tumors arising from the meninges over the bones at the bottom of the skull that cover the orbits, nose and sinuses. They also extend toward the back of the skull base covering the middle ear, pituitary gland, naso-pharynx and spinal cord. These often require a multidisciplinary team approach.

Posterior fossa and petrous meningiomas – tumors that form on the underside of the brain at the skull base. Depending on location, symptoms can include facial sensory loss, hearing problems, double vision. They can also affect the tongue, swallowing, vocal cords, movement, coordination and vital body functions.

Suprasellar meningiomas – tumors that arise from the membranes at the base of the skull near the pituitary gland and the optic nerves and can cause visual impairment in one or both eyes and, in some cases, pituitary hormone dysfunction.

Meningiomas often grow slowly without symptoms. Symptoms occur when these tumors get bigger and compress or invade the surrounding brain or its blood vessels.

Meningiomas are diagnosed through a neurological examination followed by a computed tomography (CT) or magnetic resonance imaging (MRI) scan of the brain. MRI scans are usually performed with contrast dye to help identify the tumor’s size, location and type.

An exact diagnosis can only be confirmed following a biopsy or surgical removal of the tumor. Tissue analysis by a neuropathologist defines the diagnosis and genetic profile of the tumor.

Our brain tumor specialists will work together to determine the best treatment for your unique case. Treatments could include:

The diagnosis and molecular profile of each tumor is individually reviewed by our multidisciplinary tumor board after surgery. Together, our experts recommend the best personalized and targeted treatment options incorporating the latest molecular diagnostics, treatment protocols and participation in national clinical trials.

Our team will closely monitor you and personalize your follow-up care. Our patient navigator will also connect you with our support group and other resources. Learn more

Designed for patients with meningiomas that are growing, spreading or getting worse, this phase II trial studies the efficacy of inhibitor drugs that may stop the growth of tumor cells by blocking some of the enzymes needed for cell growth. Learn more about this trial