When John Esmeraldino, 24, found out he had a tumor on the base of his brainstem, he was terrified. He began to look at the moments in his life that mattered most to him – watching his little brother play soccer, having dinner with his girlfriend and laughing with his mom – and decided they were moments he wasn't willing to leave behind. Choosing to fight, he enlisted the help of the brain cancer experts at Atlantic Health System and discovered that where you go for cancer care matters.

John's journey began three years ago when he was just a 21-year-old student at Seton Hall University. One morning, he woke up not feeling well with a headache and pain in his neck. After six days of constant symptoms, he went to a local emergency room and was transferred to Overlook Medical Center in Summit, NJ, which is renowned for its expertise in brain and neurological disorders.

John had hydrocephalus – an excessive accumulation of fluid in the brain, according to his surgeon, Yaron A. Moshel, MD, co-director of The Gerald J. Glasser Brain Tumor Center at Overlook's Atlantic Neuroscience Institute.

"Normally, we would insert a shunt to drain the fluid," said Dr. Moshel. "However, to avoid implanting a medical device, we instead entered John's brain with a tiny camera and created a hole in the bottom of his brain so the fluid could drain naturally."

A subsequent computed tomography (CT) scan revealed what appeared to be a benign tumor that was causing the fluid build-up. Since surgery in the area of the brain stem is considered high risk and the fluid was already draining, Dr. Moshel opted to watch the tumor.

Faith in the Experts

A year later, a magnetic resonance imaging (MRI) scan revealed John's tumor had grown in size and was an ependymoma – a relatively rare tumor that accounts for only two to three percent of all primary brain tumors. Adding to the complexity, the tumor was located in the midbrain, which is found within the brainstem and serves important functions in motor movement, particularly vision and hearing.

"Few doctors will ever see a tumor like John's," said Dr. Moshel.

"An ependymoma located in the midbrain is extremely rare and presents an unprecedented challenge. It's typically considered inoperable, as very few surgeons will attempt surgery venturing into the midbrain," added Dr. Moshel, who is among a select few surgeons experienced in the treatment of rare and deep-seated brain tumors.

Dr. Moshel and the multidisciplinary team of medical professionals at Overlook determined the most proactive treatment was a biopsy and surgical removal. However, a surgery this complex comes with tremendous risk, so he asked John to carefully weigh his options.

"Despite understanding the odds of not surviving the procedure, paralysis and other severe neurological issues, John insisted on having the surgery, and I knew it was the right thing to do for him," Dr. Moshel said. "A young man of great faith, John believed the surgery would be a success and he would survive without complication."

"I knew that I could trust Overlook with my life," added John, who tried to downplay the severity of the surgery as the time for his operation approached. "I said good-bye to my mom, and I thanked her for my life and for my brother's life."

His mother simply smiled and replied with confidence, "God is going to be in that operating room, and he is going to cure you."

The surgery, which involved navigating into the midbrain went flawlessly. However, the pathology report revealed the tumor was cancerous, so John underwent five and a half weeks of radiation treatment as a preventative measure with radiation oncologist Joana Emmolo, MD, who specializes in the treatment of brain tumors.

"Counter to what one would think, radiation was an inspiring experience," said John, who connected with his fellow patients in radiation oncology. "The same people were there every morning. When I first started treatments, I noticed no one liked to speak about the unspoken. Although our stories were different, we were all fighting the same evil enemy."

"So, I took the initiative to turn that time into a support session and a safe haven where all of us could share how we felt and talk about whatever we wanted. My goal was to bring positivity into everyone's lives no matter what was happening to them and to make them smile, laugh and push aside the doubts in their minds."

The encouraging and compassionate discussions that John fostered in radiation oncology were just the beginning of his mission to help others. He later went on to speak at Overlook Medical Center's 2016 cancer survivors' celebration, where in front of 180 fellow survivors and loved ones, he shared his story, his positive outlook on life and his strong belief in faith. To this day, John continues to tell his inspirational tale to anyone who's experiencing major life challenges and willing to listen.

"What I've learned through this experience is that faith is everything," John said encouragingly. "As human beings, we get scared when we lose control over something. Let me tell you, we can only control so much. We have to keep a proper balance of mental and physical health, but there's also our spiritual health."

"If you're not going to have faith and believe that you're going to be ok, why are you even showing up for treatment? You see, we went to war with cancer. It takes a toll on you physically, mentally and emotionally, but you cannot go to war with a loser's mentality. If you have faith, have faith that everything is going to be ok."

Thanks to that faith and a trust in the cancer experts at Atlantic Health System, John is still enjoying his brother's soccer games and laughing with his mom. In short, creating more moments that matter. 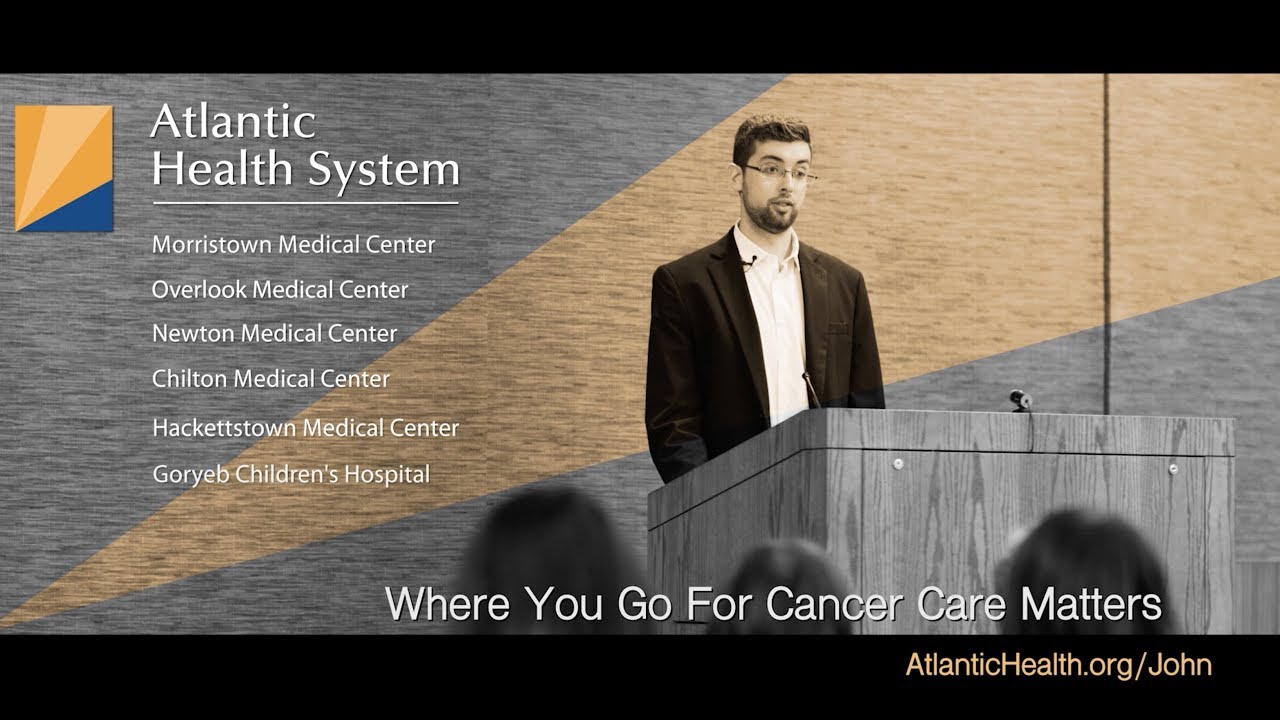