From flying in the Middle East shortly after 9/11 to landing Air Force 2 with Vice President Joe Biden aboard, retired United States Air Force pilot Susan F. is no stranger to challenging missions. Facing a diagnosis of breast cancer was no different.

After a routine mammogram detected a small tumor, Susan turned to a multidisciplinary team of Atlantic Health System specialists to help her navigate the challenges of breast cancer treatment. 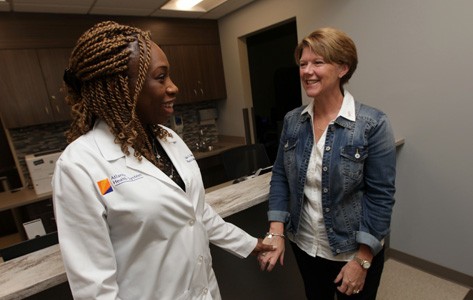 The Sparta mother of two quickly met with Sarah O. Chima, MD at Newton Medical Center and they scheduled a biopsy.

“When the call came that the results were not good, I was surprised,” Susan recalls. “But somehow in the back of my head, I thought, ‘I can do this; I’m strong and healthy, I can tackle it.’”

“As a pilot, she was concerned about returning to flying as quickly as possible,” recalls Dr. Chima. “Together, we were able to determine a course of treatment that would allow that without compromising her care.”

While a partial mastectomy followed by radiation was an option, Susan opted for a full mastectomy and targeted chemotherapy with May Abdo-Matkiwsky, DO, medical oncologist with Regional Cancer Care in Sparta and on staff at Newton Medical Center.

“Our goal was to work as a team with Susan and her husband and a successful outcome was achieved due to the grace and perseverance Susan exemplified,” adds Dr. Abdo-Matkiwsky.

Surgery was successful and plastic surgeon Daniel Schmid, MD worked alongside Dr. Chima to perform initial reconstruction the same day as the mastectomy. Later, once Susan's immune system was back to 100 perfect, he completed the final reconstruction.

Now back in the pilot’s seat for a major U.S. airline, Susan credits Newton Medical Center with saving her life not once, but twice. As a 3-year-old, she experienced a prolonged bout of vomiting, which doctors at Newton attributed to a dangerous intestinal blockage and performed emergency surgery to correct.

Some 45 years later, she is grateful that the hospital is now home to the Center for Breast Health, the only one of its kind in Sussex County.

“The thought of having to travel to Morristown or even New York for treatment was just too much,” says Susan. “I am thrilled to have such a quality medical center with capable staff right here.”