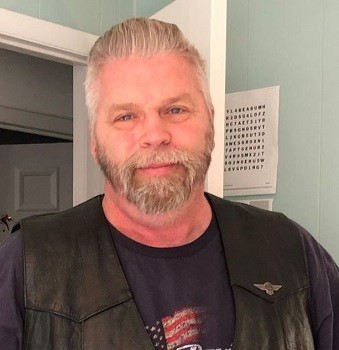 Darren R. had long suffered from bad seasonal allergies and never worried about swollen lymph nodes in his neck. But when the spring 2019 season ended and his neck remained enlarged, he knew something was amiss.

Scans and a biopsy in June 2019 showed he had metastatic squamous cell carcinoma, a neck cancer caused by the human papillomavirus (HPV) in his system.

“That was pretty devastating,” the married father of four recalled. “I wondered what this meant? Did I need to get my affairs in order quickly?”

“Dr. Thomas talked me off the ledge, and made everything better instantly,” Darren said. “He doesn’t rush you out the room. Dr. Thomas reassured me that we would take care of it.”

Dr. Thomas has said his approach to treatment is to first help patients fully understand their diagnosis, because that eases their anxiety. “I treat every one of my patients like they are my family,” he said. “Once they understand their disease process, then we deal with it as a team.”

Darren underwent robotic surgery in July 2019 to remove the cancer, followed by 30 days of radiation treatment.

“The radiation was the toughest part, and I had to learn to swallow again,” said Darren, an information technology specialist at the U.S. Army’s Picatinny Arsenal research center. When radiation treatments ended in November 2019, Darren saw a nutrition specialist to help with swallowing, and had physical therapy to address neck pain from pinched nerves.

The 56-year-old Chester resident was thrilled when he could get back to enjoying rides on his Harley Davidson. His cancer is in remission, and he follows up with Dr. Thomas every four months.

“I don’t trust many people, but I trust Dr. Thomas.” Darren said. “I don’t think you can get better treatment.”