An avid motorcyclist, John S. loves the wind in his face and the thrill of the open road, but as his melanoma progressed and treatments intensified, it became unsafe for him to ride. The bike was eventually parked – but not forever. Eric Whitman, MD, director of Atlantic Health System Cancer Care and the Atlantic Melanoma Center, treated John with a new type of personalized immunotherapy that not only stopped his melanoma from spreading, but also restored his hope of riding again.

John’s wife Cathy was the first to notice the oddly-shaped dark spot on his back. Their family doctor told them it was nothing to worry about, but five years later, the dark spot turned into an oozing scab. A biopsy revealed it was malignant melanoma. John had the tumor surgically removed, but the surgeon failed to extract enough of it, which allowed the cancer to multiply.

Cancer specialists began treating John with medications, followed by standard radiation therapy and two rounds of Gamma Knife radiosurgery, but nothing seemed to stop the disease's progression. Tumors were now clearly visible underneath his skin as the melanoma infected his entire body.

Just when things seemed dire, fate intervened. One of John’s cancer doctors had attended medical school with Dr. Whitman and was aware of the phase II tumor infiltrating lymphocyte (TIL) clinical trial at Atlantic Health System. He thought John, who was now in Stage III/IV melanoma, might qualify.

TIL is an experimental, one-time treatment, during which hematology-oncology specialists remove immune system cells from the patient’s tumor, treat them with an immune booster and then infuse them back into the body. A medication that stimulates the immune system is included with the final infusion.

“The general concept is that TIL replaces less effective white blood cells and may be better at finding, attacking and killing the patient’s cancer,” says Dr. Whitman.

John received TIL therapy at Morristown Medical Center, which is one of a few sites in the nation and the only one in New Jersey that offers this ground-breaking treatment to patients with stage IV melanoma.

“Within four weeks of a single treatment, we can see signs of efficacy in patients that respond,” says Dr. Whitman. 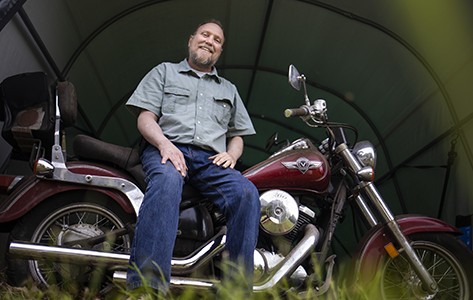 Recent results from the phase II TIL study demonstrated that 38% of patients experienced a benefit as observed from tumor shrinkage. There were also two complete responses and 23 partial responses among a group of 66 patients with late stage melanoma that had progressed despite prior treatment.

John is one patient who has had successful results with TIL. The treatment shrunk his tumors and reversed the growth of the melanoma. What’s more, John’s dream of cruising down the street on his motorcycle is becoming a reality.

“I thank God every day, and thank Dr. Whitman and his team,” John says. “This treatment has given me a second chance. Now, I am excited about getting the bike cleaned so that I can ride it again!”