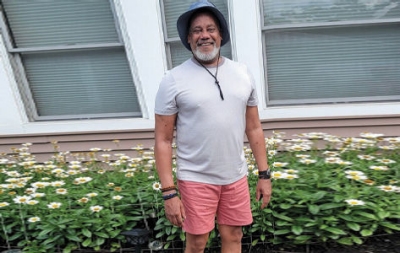 In the early 2000s, Jim T. served as the Director of Security for World Wrestling Entertainment (WWE) events. “I traveled to more than 75 countries and all 50 states,” he says. “It was a great experience.”

Yet Jim never imagined decades later that he’d find himself in his personal “Battle Royal.” His arch nemesis: a failing heart.

Jim’s journey began the day after Christmas 2021. He was visiting his mom’s house for the holidays and woke up with some back pain between his shoulder blades. “I did some stretches and figured I’d be fine,” he said. Later that evening, after running errands and taking a nap, Jim went to the kitchen to make a sandwich.

His mom grew concerned immediately. “She asked if I was OK because she didn’t like the way I had walked down the hall,” Jim said. “I told her I was fine.”

But minutes later, Jim broke out into a sweat. He asked his mom for a cold towel, then for an antacid. “It felt like there was a foot in my chest,” he said. He was suffering a serious heart attack. His mom called an ambulance.

“The next time I woke up, it was January,” Jim said.

Given the exceptional care provided during his lengthy hospital stay at Morristown Medical Center, he was able to be transferred to NYU Langone where he not only tolerated, but thrived after transplant.

EMS crews rushed Jim to Overlook Medical Center. There, doctors diagnosed him with an acute heart attack and rushed him to the cardiac catheterization lab for an emergent angiogram. They identified several serious blockages in the arteries of his heart, the most concerning of which was in the left anterior descending (LAD) artery, which supplies blood to the front and left side of the heart.

Interventional cardiologist David Bartov, MD, placed stents in Jim’s arteries to keep them open. Then, realizing that Jim’s condition was rapidly worsening and that he needed additional care, Dr. Bartov arranged for emergent transport to Morristown Medical Center. Morristown is home to the Cardiovascular Rescue and Recovery Program, which provides the highest level of care, expertise and technology for patients with life-threatening heart conditions.

“Massive heart attacks like Jim’s can cause extensive damage to the heart muscle”,” said Amirali Masoumi, MD, medical and interventional director of the Cardiogenic Shock program. “Unfortunately, Jim’s condition quickly deteriorated into cardiogenic shock, which means his heart couldn’t pump enough blood to sustain his brain and other vital organs.”

To give Jim the best chance of survival, Dr. Masoumi and his team placed Jim in a medically induced coma and began extracorporeal membrane oxygenation (ECMO) therapy. It pumps blood outside of the body into a heart-lung machine. The machine adds oxygen to and removes carbon dioxide from the blood, then pumps the blood back into the body.

After a very detailed and multidisciplinary assessment, Jim’s medical team—under the leadership of world-renowned interventional cardiologist Dimitrios Karmpaliotis, MD, medical director of the Cardiovascular Rescue and Recovery Program—chose to open the rest of Jim’s blocked arteries to provide him the best chance of survival. The team successfully performed the high-risk stenting procedure using a method called “zero contrast percutaneous coronary intervention,” avoiding the use of dye contrast that could potentially harm his kidneys.

Jim emerged from his medically induced coma in mid-January, but the damage to his heart muscle was irreversible, and he needed further evaluation for his advanced heart failure. As Jim’s kidney, lung and liver functions improved, his multidisciplinary care team focused on getting Jim in good enough shape to be evaluated for a heart transplant.

“We asked our colleagues at NYU Langone Health to consider his case and began advocating for Jim to receive a heart transplant,” Dr. Masoumi said.

Receiving the gift of life

EMS crews transported Jim to NYU Langone on the evening of March 11. Thanks to a clinical affiliation between Atlantic Health System and NYU Langone, patients like Jim who need a heart transplant can receive one in Manhattan with NYU Langone’s nationally recognized Transplant Institute.

The morning after arriving at NYU Langone, Jim met with the hospital’s transplant surgeon Nader Moazami, MD, and heart failure and transplantation cardiologist Randal Goldberg, MD. “They told me that I may need a left ventricular assist device (LVAD) [a type of permanent heart pump] if they couldn’t find a heart, but that a transplant would be the best option,” Jim T. said.

Jim T. went on the transplant wait list on April 1, and a donor heart was found quickly—just 15 days later. “That’s when it hit me—I just broke down,” Jim said. “I knew somebody had lost their life in order for me to live.”

The next day, Dr. Moazami performed the heart transplant surgery. Jim returned to his North Plainfield home on April 28, 2022 He received his immediate post-transplant follow-up care at NYU Langone and transitioned to follow-up care at Morristown Medical Center—closer to his home.

“Oftentimes, when patients like Jim have this degree of cardiogenic shock, it’s very difficult to recuperate them to the ability that they could tolerate a heart transplant,” Dr. Goldberg says. “However, given the exceptional care they provided during his lengthy hospital stay at Morristown Medical Center, he was able to be transferred to NYU Langone where he not only tolerated, but thrived after transplant, being discharged home only 12 days after surgery.”

Reflecting on a battle won

As he fought to stay alive, Jim relied on the support of his family, including two grown sons, his mother, girlfriend, his ex-wife and his sister, Cassandra, who took off from her job in North Carolina to serve as Jim’s caregiver. He also received encouraging video messages from WWE wrestlers Kurt Angle, the Undertaker and Kofi Kingston.

“People were praying for me from all over the country, and those prayers mattered,” he said. “I even had a group of old friends from high school—we called them Vince’s Gang—who came to see me every week. They were a big part of my healing process.”

So, too, were the teams at Morristown Medical Center and NYU Langone. “Dr. Masoumi was fantastic, and the entire nursing staff there, my physical therapists, my dietitian—everyone checked on me, made sure I did everything I needed to do to get well. The nursing staff at NYU Langone was amazing, too.”

While it will be at least another year until Jim returns to work (he had started a second career as a truck driver prior to his heart attack), he’s building strength every day and looking forward to the future. “Recovering from what Jim experienced is a marathon, not a sprint,” Dr. Masoumi says. “But Jim has the right team, the right attitude and a promising future to care for the precious gift he has received and to help other patients in similar situations.”