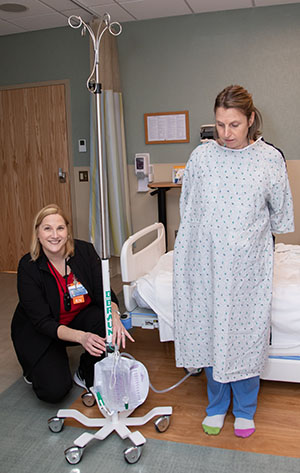 A focus on patient safety plus encouragement to be creative has turned local nurses into inventors. One simple invention at Morristown Medical Center could end up shortening hospital stays and saving thousands of dollars.

“Most patients recover fastest when they are up and walking as soon as possible after a procedure,” says Christine McCandless, RN, assistant nurse manager for Gagnon Cardiovascular Institute at Morristown Medical Center. “But medical devices that have wires and tubes can interfere with that mobility. In short, they can be a fall hazard.”

Recently, nurses at Morristown Medical Center have been encouraged to find solutions for such issues, says Mildred (Milli) Kowalski, PhD, RN, Center for Nursing Innovation and Research. A series of classes has helped them learn to innovate and collaborate in ways that improve patient care.

“We thought about attaching all the wires and tubes to an IV pole, which has wheels on it and would, therefore, help patients move around,” McCandless says. “But for catheter bags, for example, there was no easy way to attach the equipment.”

So McCandless began experimenting. As she created early prototypes of the drainage bag hook, other nurses weighed in with ideas to make it more and more useful. A hook was created that does not move. It is placed in the IV pole that moves and provides a place to hang the bag to facilitate walking without holding the bag.

“We’re still collecting ideas from staff here and at other Atlantic Health System hospitals, to make it better, but it’s exciting to have found a solution that enables patients to move easily and safely,” she says.

“Research shows that early mobility leads to quicker recovery and an earlier return home,” says Carol Jones, chief nursing officer, Morristown Medical Center. That translates into cost savings, according to a study conducted by a team of doctors and nurses at Morristown as well as other research.

“Next steps will be to expand use of this simple device to all Atlantic Health System hospitals and beyond,” Jones says.