Patients May Not Need Open-Heart Surgery 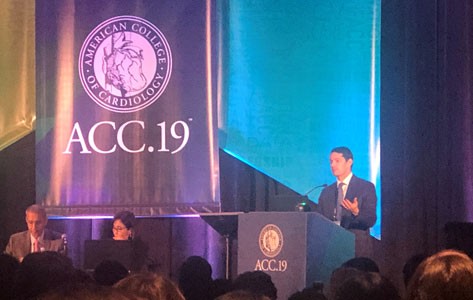 About five million adults in the U.S. have aortic stenosis, a narrowing of the heart’s aortic valve opening which restricts blood flow from the left ventricle of the heart to the aorta. Traditionally, patients were treated with open-heart surgery to have the valve replaced. However, many who most needed valve replacement were too sick or frail to undergo surgery.

A new study released on March 16, 2019 at the 68th Annual American College of Cardiology’s Scientific Sessions found that transcatheter aortic valve replacement (TAVR), a procedure to repair the heart valve via a catheter inserted through the major vein of the leg, offers a safe and less invasive alternative to open heart surgery in some low-risk patients with severe aortic stenosis,

The study found that a year after the procedure, the rate of death, stroke, or rehospitalization was significantly lower with TAVR than with traditional open-heart surgery.

As many as 400,000 patients around the world have had TAVR since it was first introduced in the mid-2000s.

Atlantic Health System’s Morristown Medical Center performs the most TAVR surgeries at a single site in the state.