Returning to a New Normal 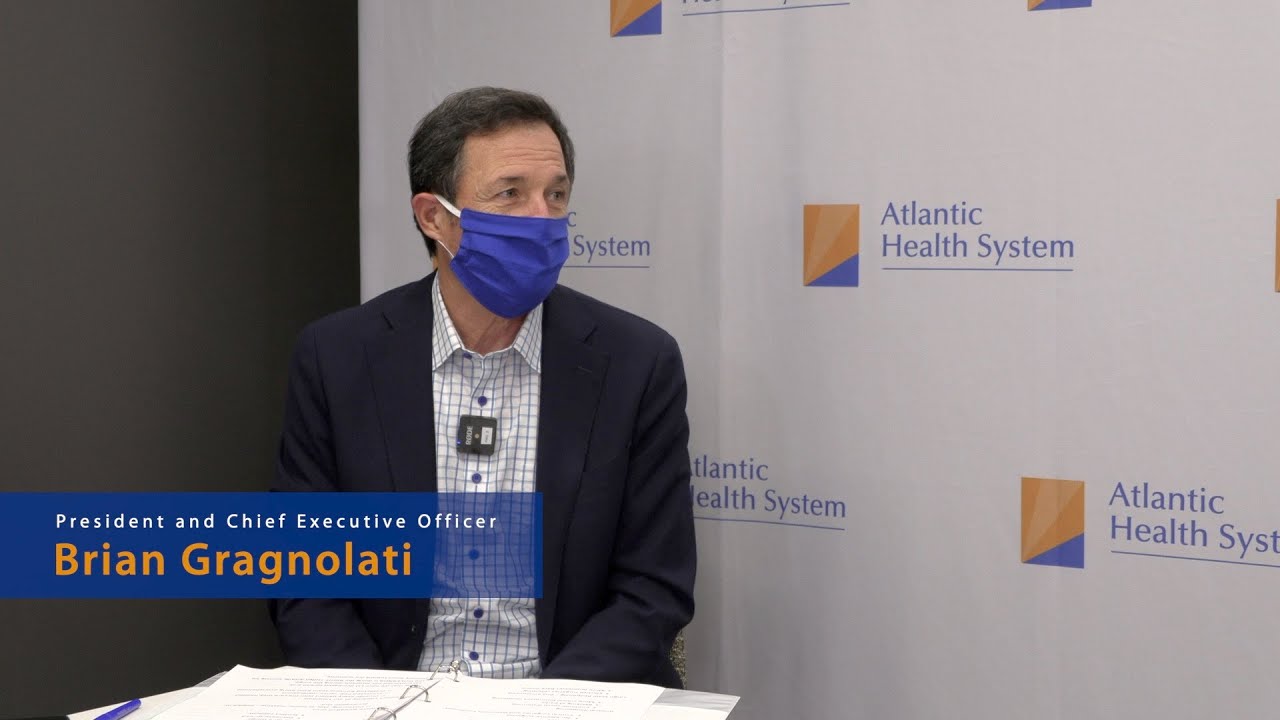 “We’re going to coexist with COVID and we’re going to be in that situation for the next couple of years,” according to Brian Gragnolati, president and CEO of Atlantic Health System.

Gragnolati was speaking about the “new normal” when it comes to delivering care, returning to work and planning for the future during a Facebook Live Community Conversation held Tuesday, May 19.

He explained actions that he believes the community can take now to help avoid future surges. At the community level, he said, it means being proactive about your health needs, seeking care for chronic and emergency conditions, getting vaccinated for the flu and following social distancing guidelines as things reopen.

At the state level, he said, expanding testing capabilities and contact tracing will be keys to controlling the spread of COVID-19 and making sure infected people are isolated in a proper way.

“If we don’t do those things, if people ignore the guidance on what they need to do … we’re going to see another surge. And that would be a very scary thing.”

What has worked so far?

Amid dire predictions early on, we were able to “thread a needle” through social distancing and severe restrictions on movement and business operations, Gragnolati said. In other words, the health care system wasn’t overrun, and medical centers were able to care for patients when they needed it despite some scary times.

“One of the things that we learned (as a community) is to listen to the science and to make sure that we follow that guidance, because it does really work.”

Facing a novel virus, the Atlantic Health System team mobilized all their talent to innovate, adapt to different roles and learn which treatments get results.

The system’s laser focus on clinical excellence and access to care before the pandemic worked during the crisis too, Gragnolati said, and not just for COVID patients. Patients with other illnesses also continued to receive extraordinary care.

What are the keys to response going forward?

First, is to make sure we never get to peak levels again, Gragnolati said, citing a peak where almost 900 patients were in the hospital system on any given day, including about 30 percent in intensive care units. That’s why following the rules of reopening, social distancing, hand washing and wearing facemasks are all going to be critically important.

At the same time, we need to hedge that bet and be prepared to surge up again, he said. “I hope we’re never there, but we have to be ready.”

What can we do to mitigate a possible surge this fall or winter?

Get a flu shot – Increasing the number of people who are vaccinated for the flu is particularly important this year, since a normal flu season often taxes the resources of the health care system, Gragnolati said. We need to get those “levels way up there of immunization, because we want to tamp down the flu this coming winter.”

Take care of your health needs now – Unfortunately, people have stayed away from the health care system in ways that are unhealthy, out of fear of exposure, putting off chronic care visits and waiting too long to address symptoms. Gragnolati sees the evidence of that, not just in the severity of illness in emergency departments and doctor’s offices, but in prehospital emergency services. Paramedics have been called to homes to pronounce people dead at a rate that’s twice what is typical, he said.

Gragnolati stressed the importance of making sure people get the care they need, which is safe and available. Learn more about our enhanced safety precautions >

Will it be safe for elective procedures?

Guidance on moving forward is coming soon from the governor. It begins to describe how we’re going to reopen what is described as elective surgery, Gragnolati said, but it really is a little more than that. He views that as a good thing because it will give people confidence that it’s time to enter back into the health care system.

“The thing that I think people miss here is that our hospitals and our doctors’ offices and our ambulatory sites here at Atlantic before COVID were already very safe.”

“During the surge, they were also very safe,” Gragnolati said, citing many enhanced precautions to protect team members and patients, whether they had COVID or didn’t.

“I think when the data begin to emerge, you’ll see more evidence of (how safe it has been), but clearly that was the case.”

What’s the solution to no longer having to coexist with COVID?

“It’s as black and white as simply having a vaccine,” Gragnolati explained, and then having people take the vaccine and making sure it’s effective.

The other piece is to have “confident” treatments available. “Oftentimes we’ve had some results with dealing with the symptoms, but not this silver bullet antiviral drug,” he said.

Life as we used to know it is going to have to change, Gragnolati stated, but it doesn't mean that that’s necessarily a horrible thing.

What are the financial impacts of the pandemic on the health system?

The COVID-19 pandemic has dramatically affected health care across the country, including Atlantic Health System. The rules put in place to close certain types of non-emergency care were the right thing to do, Gragnolati said, because they created the capacity to handle the surge of COVID-19 patients.

However, delaying these procedures reduced the system’s level of activity and revenue by about 40 percent for the last two and a half months.

Creating surge capacity also comes at a high cost, from setting up new intensive care units and bringing in extra team members, to procuring protective equipment. Adding to that, the reimbursement Atlantic Health System received for taking care of these critically ill patients was nowhere near the true cost of care.

How has Atlantic Health System handled those financial impacts?

We had three things going for us here at Atlantic Health System, Gragnolati said, despite added expenses and reduced revenue.

Atlantic Health System started from a strong, conservative financial position, and was able to navigate the challenges without affecting people’s jobs, he said, which continues to be an important goal.

Early on, Atlantic Health System used a federal program that’s set up as a loan to provide cash flow.

The system has also received grants under the CARES Act. The first of those grants were distributed to hospitals throughout the country, he said, and now a second wave has been focused on surge areas.

“We were very fortunate to receive those funds. And we are looking forward to and expecting more of those payments over the next couple of weeks.”

What other challenges does Atlantic Health System face?

Two problems linger in the health care system today, Gragnolati said. One is the availability of diagnostic testing at the bedside, exam room or curbside, whenever you want it. Broad-scale testing is going to continue to need to be pursued, he said.

The second challenge is around the availability and demand for personal protective equipment (PPE). As the economy opens, masks and gloves are going to be needed by consumers and businesses. A lot of surgery centers and physicians’ offices will also need to be resupplied.

“We are actively creating our own stockpiles,” Gragnolati said, which involves additional rented warehouse space and cooperation with other area health systems on joint purchasing.

“We’re going to continue to make sure we’ve got the right supplies, but we’re going to need the government’s help there,” he stated, emphasizing the need for government stockpiles and expanded production of protective equipment.

How can Atlantic Health System be a role model for other businesses looking to reopen?

Atlantic Health System team members have done extraordinary things to care for our communities. “We take this virus very, very seriously because we see the consequences of it,” Gragnolati said.

He advised that those farther away from a direct connection, particularly in parts of the country that were not as hard hit, may not be as vigilant or believe it will affect them.

“You can’t live life in a bubble, but you can sure live life smarter by washing your hands, masking, and following principles of social distancing,” Gragnolati said.

Health care professionals can be the best advocates for that by sharing stories that “bring to life the impact that this has had,” he said, to help people understand that this has not gone away, and it could seriously impact a loved one.

Gragnolati is hopeful about the future. “Out of bad things, always comes a lot of good,” he said, citing the outpouring of support and teamwork from the community and the incredible innovation he’s seen.

Learn More about Community Conversations
Get Updates from Us