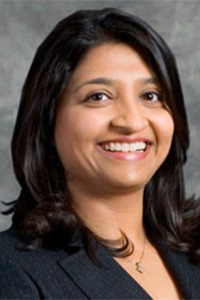 In 2021, 230,000 adults in the U.S. were diagnosed with lung cancer. Of those, 13 percent will have small cell lung cancer – an aggressive form of cancer known for spreading quickly throughout the body and to the brain.

The good news is, preventing brain metastases from this type of cancer is possible. Maithili V. Rao, MD, who is board-certified in hematology and medical oncology by the American Board of Internal Medicine, explains.

What is small cell lung cancer, and how is it different than other types of lung cancer?

Lung cancer is the second most common cancer in both men and women. Small cell lung cancer accounts for approximately 13 percent of lung cancer cases and is almost always seen in people who have a history of heavy smoking. What’s most notable about small cell lung cancer is the rapid onset of symptoms, such as a worsening cough, shortness of breath or coughing up blood, and how quickly it spreads throughout the body. By the time it is diagnosed, 90 percent of cases are locally advanced or in an advanced metastatic stage. Given the extraordinarily fast pace of disease progression, I cannot stress how important it is for individuals who qualify to get their annual lung cancer screening. This primarily includes people between the ages of 50 and 80 who are, or were, heavy smokers.

Does small cell lung cancer often metastasize to the brain?

It absolutely does. As many as 40 to 50 percent of patients with small cell lung cancer will develop brain metastases at some point during the course of their disease. In fact, 45 percent of patients who respond well to treatment for small cell lung cancer at other sites in their body will go on to relapse in the brain within the first two years. This means that even if the systemic disease is controlled, there is a high probability of patients developing brain metastases over the next year or two.

How can you prevent metastatic disease from small cell lung cancer in the brain?

Prophylactic cranial irradiation (PCI) is a preventive radiotherapy treatment of the entire brain designed to prevent small cell lung cancer cells from developing in the brain. Knowing there is a high percentage of patients who have subclinical brain metastases – growths that are so small they are virtually invisible on MRI scans – this preventive method of treatment is key to stemming the growth of malignant cells. Clinical trials have proven that PCI reduces the incidence of future brain metastases by about half and improves long-term survival.

As with any treatment, a trusted oncologist – or even better, a multidisciplinary team of medical experts – can help you weigh the benefits and the risks of PCI. While the data are limited, neurocognitive toxicity is a potential concern. However, there are measures that can be taken to minimize cognitive risks, such as shielding the hippocampus and modifying the dosage or therapy schedule. People with lung cancer are living longer than ever before – and we want to ensure they have the best quality of life possible.