“It is my honor and privilege to welcome Atlantic Health System and their partner in this project, Kindred Healthcare, to this beautiful site on Giralda Farms - the former estate of Geraldine Rockefeller Dodge - and the Madison community,” said Conley. 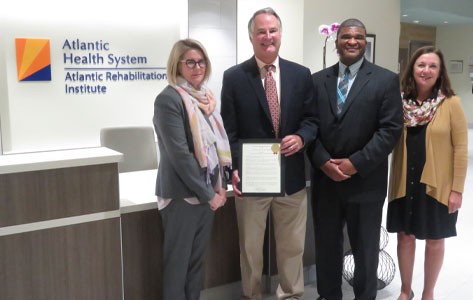 “The opening of the Atlantic Rehabilitation Institute here in Madison will provide accessible, conveniently located, innovative rehabilitative services to those in need. This facility will also be a tremendous economic asset as Atlantic Health continues to expand its footprint, providing the highest quality health and wellness services in the region. We look forward to building a strong community partnership with Atlantic Health now and into the future,” continued Conley.

The new $24 million, two-story, 38-bed rehabilitation hospital located in Madison, NJ, is the first standalone hospital to be built from the ground up by Atlantic Health System, and provides a new home for its 38 inpatient rehabilitation beds at its former facility on Mount Kemble Avenue in Morristown. The hospital is a joint venture between Atlantic Health and Kindred.

After marking the completion of the building in July, the hospital received final approvals from the state Department of Health in September, followed by an inspection and accreditation by the Joint Commission earlier this month, clearing the way for the hospital to admit a wide range of patients.

“The work to bring this hospital to reality from the ground up, over little more than a year, has been driven in part through the enthusiastic support from the community,” said Corey Cooper, Executive Director for Atlantic Rehabilitation Institute. “We are excited to finally begin providing a new level of rehabilitation care to patients in our region.”

The new, modernized hospital greatly expands the breadth of capabilities and resources available for treatment, with the aim to help return function to patients and better prepare them to resume everyday functions in their normal life. The hospital was also designed to accommodate visiting families, with several meeting spaces, as well as amenities.

Atlantic Rehabilitation Institute stands on approximately 46,000 square feet of land, part of a 40-acre parcel of Giralda Farms owned by Atlantic Health System that will be developed into a campus for health services.

The hospital is located off Route 124 in Madison within the Giralda Farms campus, once the former estate of Geraldine Rockefeller Dodge, and is now considered one of the most prestigious office parks in the metropolitan area.

Ground was broken on the new hospital on May 22, 2018. The building was designed by Earl Swensson Associates, and constructed by Holt Construction, and was constructed on schedule.

Offering a full continuum of care, the system includes Atlantic Medical Group, one of the largest multi-specialty practices in New Jersey with more than 1,000 physicians and providers, 12 urgent care centers, Atlantic Rehabilitation and Atlantic Home Care and Hospice. Facilitating the connection between these services on both land and air is the transportation fleet of Atlantic Mobile Health.

Recognized as one of the Best Places to Work by both Modern Healthcare and Fortune Magazine, Atlantic Health System attracts leaders in the field of health care, from CEO Brian Gragnolati, who is currently Chairman of the American Hospital Association, to the numerous team members who serve as leaders across a wide breadth of clinical associations and research entities. Atlantic Health System's Morristown Medical Center is named the number one hospital in New Jersey by U.S. News & World Report, Newsweek, and Castle Connelly.

Kindred Healthcare, LLC is a healthcare services company based in Louisville, Kentucky with annual revenues of approximately $3.3 billion1. At June 30, 2019, Kindred through its subsidiaries had approximately 34,500 employees providing healthcare services in 1,760 locations in 46 states, including 71 long-term acute care hospitals, 22 inpatient rehabilitation hospitals, 11 sub-acute units, 95 inpatient rehabilitation units (hospital-based) and contract rehabilitation service businesses which served 1,561 non-affiliated sites of service. Ranked as one of Fortune magazine’s Most Admired Healthcare Companies for nine years, Kindred’s mission is to help our patients reach their highest potential for health and healing with intensive medical and rehabilitative care through a compassionate patient experience. Visit us online or follow us on Twitter and Facebook.