Princeton, NJ – MaryPat Sullivan, RN, MSN, CNS, chief nursing officer and chief experience officer at Overlook Medical Center in Summit, NJ, on Thursday received a 2019 Divas of Nursing Award from the Institute for Nursing and the Foundation of the NJ State Nurses Association at the annual Divas and Dons in Nursing celebration.

The event, held at the Hyatt Regency Princeton Hotel, honored Sullivan and 12 other New Jersey nurses, leaders and educators who have made an extraordinary impact on the nursing profession and on improving the health of our community.

Sullivan joined Overlook as CNO in 2007, and as an integral part of Overlook’s senior leadership team, has created a healing environment with a focus on health care literacy and diversity, as well as implementing programs that provide for seamless pre-hospitalization, acute care, and post-hospitalization transitions of care 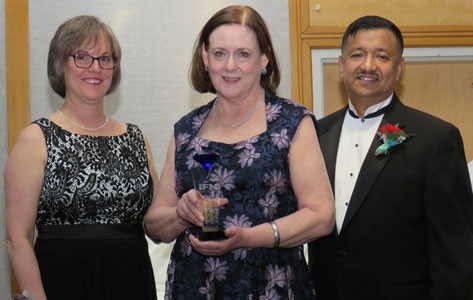 “Nursing at Atlantic Health System is certainly a team sport, requiring the collaboration of the entire organization in order to exceed our patients’ needs and to provide an outstanding environment in which our nurses can practice,” Sullivan said.

Sullivan’s leadership of the nursing staff has been instrumental in many of Overlook’s achievements and accolades, including several disease-specific certifications by the Joint Commission. In March, Overlook was named among the World’s Best Hospitals by Newsweek in its inaugural rating. Overlook was also named one of ‘America’s 100 Best Hospitals’ for the second year in a row in 2018 by Healthgrades, which also named Overlook a 2018 Distinguished Hospital Award for Clinical Excellence, as well as among the top hospitals in the nation in a wide variety of specialties and services. Overlook’s nursing excellence also helped the hospital achieve two consecutive “A” Grades by the Leapfrog Group in 2018.

The Emergency Department at Overlook’s Union Campus has been designated as an ENA (Emergency Services Association) Lantern Award winner three consecutive times. Sullivan has been individually recognized as well, including the Liberty Science Center’s “Women in STEM” award in 2016.

Nursing has been integral to the development of Overlook’s status as a leader in neuroscience care, with U.S. News and World Report last year again designating Overlook as a high-performing hospital in Neurology & Neurosurgery - placing it among the top 10 percent of hospitals in the country for that specialty.

Committed to partnering with community programs, Sullivan was instrumental in establishing Overlook as the employer host of Project SEARCH, a program that helps young adults with disabilities in Union County to gain on-the-job experience. The program, now in its third year, has led to numerous interns achieving employment at the hospital and other local companies, and helped Overlook be recognized in 2018 with the Employer of the Year Award from the New Jersey chapter of the Association of People Supporting Employment First (NJ APSE).

Throughout her time at Overlook, Sullivan has served as an advisory board member of Felician University of Nursing, a volunteer for the American Heart Association, and a member of the Alumnae Board of Loyola University of Chicago, where she received her master of science degree in nursing.

Through its annual Divas and Dons in Nursing celebration, the Institute for Nursing calls attention to the outstanding achievements of accomplished New Jersey nurses. Proceeds from the event will fund scholarships for nursing students, and nurses who are advancing their education. The Institute also provides quality continuing education programs, and grants for nurses involved in research.

“The mission of the Institute for Nursing is to preserve the heritage, principles, values and practices of our health profession through the support of scholarships, education and research,” said Kathleen Gillespie BSN, MBA, NE-BC, Chair, Institute for Nursing, “Our current goals include raising money to expand our scholarship and research programs. We want to bring more nurses into our profession and develop educational programs to keep nurses current on the major advances in health care. This effort is vital to improving the quality of health care in New Jersey.”