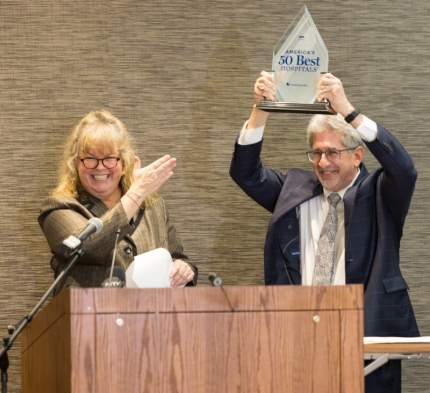 The distinction places Overlook in the top 1% of nearly 4,500 hospitals assessed nationwide for its consistent, year-over-year superior clinical performance as measured by Healthgrades, the leading resource that connects consumers, physicians and health systems.

Overlook had previously been recognized by Healthgrades for three consecutive years as one of ‘America’s 100 Best Hospitals.’ Its continued drive to enhance quality led Healthgrades to recognize it among the 50 Best.

“Patients in our region can look to Overlook and know that they will receive the best care in the country,” said Overlook president Alan Lieber.

“Achieving exemplary quality measures year after year is a monumental feat. Overlook’s focus on clinical outcomes, combined with a spirit of innovation and understanding that every team member has a part to play in the extraordinary care we provide is what propelled us to this elite status.”

The award was presented to Mr. Lieber by Marilee E. Aust, senior director of quality solutions for Healthgrades, at a celebration at the hospital on Tuesday attended by Overlook team members, as well as supporters of the hospital.

“This designation by Healthgrades demonstrates how the continued financial support of our generous donors, wisely invested by hospital leadership, has led Overlook to become one of the best hospitals in the nation,” said Bev Luehs, board chair of the Overlook Foundation, the non-profit organization that supports the hospital. “Today, we are prouder than ever to help Overlook continue to lead the delivery of health care to our communities.”

“As representatives of the communities Overlook serves, it gives the board immense gratification to see that our efforts have helped elevate Overlook to this prestigious position,” said Frank Macioce, chair of Overlook’s Community Advisory Board. “The value of having one of the best hospitals in the nation serving our communities cannot be overstated.”

Radest presented Overlook with a proclamation, noting the Healthgrades achievement.

“Overlook is an important institution in our community, and a valued partner in improving the health and lives of our residents,” said Summit Mayor Nora Radest. “I am pleased to present Overlook Medical Center with this proclamation today, and proud that Summit is home to one of the best hospitals in the nation.”

Recipients of the Healthgrades America’s 50 Best Hospitals Award are recognized for overall clinical excellence across a broad spectrum of care. During the 2020 study period (2016 through 2018), these hospitals showed superior performance in clinical outcomes for patients in the Medicare population across at least 21 of 32 most common inpatient conditions and procedures — as measured by objective performance data (risk-adjusted mortality and in-hospital complications).

And during that same period, if all hospitals performed similarly to those achieving the award, 188,768 lives could potentially have been saved. For example, patients treated for Heart Attack in hospitals achieving the Healthgrades America's 50 Best Hospitals Award have, on average, a 23.4 percent lower risk of mortality than if they were treated in hospitals that did not receive the award. *

“It’s more important than ever to do your research before selecting a hospital. Healthgrades America’s 50 Best Hospital Award recipients are dedicated to high quality care, and consumers can feel confident in using sources like Healthgrades and these awards to help select the best hospital for their healthcare needs,” said Brad Bowman, MD, Chief Medical Officer at Healthgrades.

Overlook’s sister hospital, Morristown Medical Center, also received the award, making Atlantic Health System, a nationally-recognized provider of health care, the only system in New Jersey with hospitals that were recognized by Healthgrades in their 50 Best as well as their 100 Best Hospitals for 2020.

Powered by a passionate workforce of 17,000 team members and 4,800 affiliated physicians dedicated to building healthier communities, Atlantic Health System serves more than half of the state of New Jersey, including 11 counties and 4.9 million people. The system provides care for the full continuum of health needs across a wide array of settings, including Atlantic Medical Group, one of the largest multi-specialty practices in New Jersey with more than 1,000 physicians and providers, 12 urgent care centers, Atlantic Rehabilitation Institute, Atlantic Home Care and Hospice and Atlantic Anywhere Virtual Visits. Facilitating connections between these services on both land and air is the transportation fleet of Atlantic Mobile Health.

*Statistics are based on Healthgrades analysis of MedPAR data for years 2016 through 2018 and represent 3-year estimates for Medicare patients only.