As a child, Kathleen M.J. was thin. But, once she started to have children, things changed. She began putting on weight and couldn’t take it off. Her children were sad that riding a bicycle was out of the question for their mom, along with many other activities they enjoyed. She’d grow tired quickly, and was soon out of breath. She developed sleep apnea and she was borderline for developing diabetes. Her weight climbed to 250 pounds.

Her weight affected her employment, too. Working with small children at a pre-kindergarten school meant bending, stooping, and spending lots of time on the floor with the youngsters. There were times when getting off the floor was hard.

Something had to change, but Kathleen was initially afraid of surgery. As she watched others she knew, including her husband, who had weight loss surgery, she began to see for herself the positive changes it made in their lives. She knew then that she could do it too.

In December 2015, Kathleen attended a weight loss seminar, where she met with bariatric surgeon Joao Lopes, MD and was very impressed.

Kathleen said “The pre-op seminar was very interesting. I met with a nutritionist, as well as a psychologist. Everyone stressed that this was an important step and I needed to be certain that I wanted the surgery.” She thought the entire team was very supportive.

She knew when planning for the surgery at Overlook Medical Center that she wanted to do this for herself and for her children.

Based on the advice of Dr. Lopes, Kathleen chose gastric sleeve surgery, which is a restrictive operation where the surgeon removes a large portion of the stomach, creating a thin vertical sleeve-shaped stomach pouch that is about the size of a banana. With a smaller stomach, patients will feel full a lot quicker. This means that bariatric patients must make a lifelong commitment to changing how and what they eat in order to lose weight. 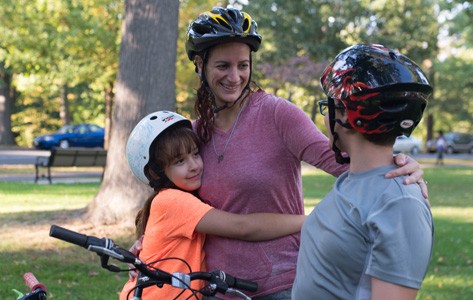 “The hospital and bariatric surgery program was great,” Kathleen says. “They gave me all the support and guidance I needed.”

Now, Kathleen's life is back on track and after losing 120 pounds, her sleep apnea is gone and her blood sugar is well within normal limits. What's more, bicycling as a family has become a favorite pastime of hers and her children, who say she's like a “new mom.”

Kathleen's only regret is that she didn’t have bariatric surgery sooner, since it’s changed her life in so many ways.

"I lost the weight … and gained everything," she says.