Bariatric surgery isn’t just a solution for overweight patients. It can also be a gift to those who care about them most. In the case of Stephanie R., who had a sleeve gastrectomy at Morristown Medical Center, her son couldn’t be more delighted to have an active, energetic mother.

Stephanie was always in good shape as a child thanks to five brothers who kept her on her toes. When she became pregnant, however, she gained slightly more than the recommended weight and the numbers only continued to climb thereafter.

Like most who are struggling to lose pounds, Stephanie tried several methods – diet pills, weight loss plans and meetings with nutritionists and hypnotists – but nothing worked. At the same time, personal issues increased her stress and anxiety, which further fueled bad eating habits.

Desperate and out of options, Stephanie agreed to her mother’s suggestion that she explore bariatric surgery. Her research led her to Ashish Padnani, MD, a bariatric and general surgeon at Atlantic Medical Group who practices at both Morristown Medical Center and Newton Medical Center.

“When I met him, I instantly knew that was the doctor I wanted to do my surgery with,” says Stephanie.

After the initial consultation, Dr. Padnani thought a sleeve gastrectomy would be the most appropriate procedure for a variety of reasons.

“The beauty of laparoscopic sleeve gastrectomy is that it not only reduces the size of the stomach, but also eliminates hunger hormones produced by the stomach, which assist in portion control,” says Dr. Padnani. “It also changes other hormones in the body that help with weight loss, improved metabolism and overall health.” 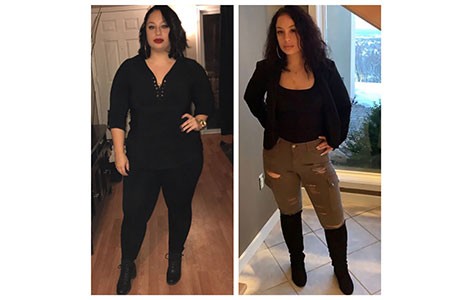 The surgery went well, but the recovery, particularly the first two months, were rougher than Stephanie anticipated. She persevered, however, and with Dr. Padnani’s support, was able to reach her goal weight of 150 pounds in just five months.

“I’m smaller now than before I had my son,” says Stephanie, who’s so happy with her results that she’s referred several patients to Dr. Padnani.

To maintain her new physique and avoid complications, Stephanie, like all bariatric surgery patients, had to remain vigilant about what she ate. Her new diet called for limited sugar, increased proteins and vegetables, and plenty of water. Dining out also had its limitations, as she had to watch portion control.

“Stephanie was very motivated and decided to take charge of her health, which made her very successful after surgery. Most patients like Stephanie report improved overall health, self-esteem and feel a lot more energy,” says Dr. Padnani.

Stephanie’s increased energy levels have allowed her to enjoy more activities with her nine-year-old son Michael. They recently went hiking in the rain forests of Puerto Rico, an experience that was unthinkable just a year ago, but is now a memory they cherish together.

Stephanie says of her appreciative son, “He touches my stomach and says, ‘Mommy, your stomach is flat now.’”