“My mother died of ovarian cancer, and it is important for me to participate in the CA-125 study to protect my health,” said Lee R. “If there’s a way to contribute for the health of future generations, it’s also a good thing.  Participating in this study is one of the easiest and most gratifying things that I can do.”

Lee has taken part in the CA-125 clinical trial at Overlook Medical Center since 2011, when Atlantic Health System signed on to the national early detection study. The landmark study uses a simple blood test for the CA-125 protein to screen women who are at low risk for ovarian cancer. The purpose of the clinical trial is to help determine whether this test can catch ovarian cancer early in women who would not normally be screened for it. 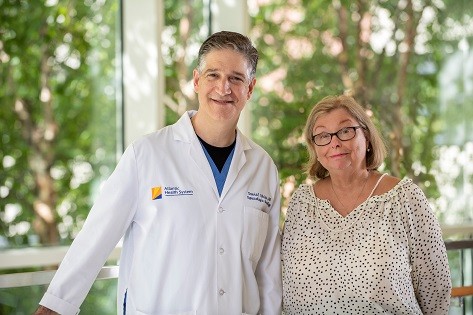 “Ovarian cancer accounts for more deaths than any other gynecologic cancer,” said Dr. Tobias.  “If caught early, ovarian cancer has a 90% five-year survival rate, but most cancers aren’t detected early enough.  We want to not just encourage women at low risk to participate in this study, but for all women, even those who may be at higher risk to speak with their ob/gyn about what types of testing might be appropriate for them.”

Most ovarian cancer is detected at stages 3 or 4, with a 75% chance of recurrence after treatment. The CA-125 blood test is currently only used in women who have had ovarian cancer or who already show symptoms. A high CA-125 marker may indicate the need for further testing, however, by that time it is often already late-stage cancer.

Atlantic Health System hospitals are the only centers in the New Jersey-New York area to participate in the study, and have the third highest enrollment numbers in the nation.