Fast Action and Teamwork Save a Life

The staff of Hackettstown Medical Center often get letters of appreciation from patients and families, but one letter was extra special because it was from a hospital employee:

“My father, Eduardo, came to the emergency department with chest pain,” says Stephanie P., department lead for patient access and emergency registration. “Jaymes, our physician assistant, who was absolutely phenomenal, knew my father’s situation was serious and acted fast. He was extremely thorough, explaining every step of the way to us.”

Eduardo says he was at work when he started feeling ill. “I felt a little bit of chest pain, but I felt like maybe it was the food I had at lunch. So I sat down and relaxed, and it went away.”

Timing was so important in this situation, and Hackettstown and Morristown’s great teamwork and fast decision-making saved my father’s life. 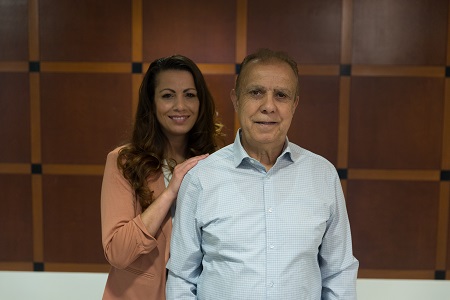 The next day the pain came back so when he called his doctor, he was told to get to the emergency department.

“I actually have a very clear memory of this whole event,” says physician assistant Jaymes Testa. “When he came in, he had chest pain that had developed several days before. He had pain in his sternum that would go straight to his back. He looked OK, but he was pensive, stressed. You could tell he was controlling his emotions for his family.”

An electrocardiogram (EKG) was performed along with lab work. Based on the results of these tests, Testa initiated the transfer process to Morristown Medical Center, where Eduardo eventually had open-heart surgery.

“I knew this patient was very critical at that time,” says Testa. “I tried to instill a sense of confidence in the family and let them know they were in good hands. I kept updating them about what was happening as I was treating him.”

Thinking back on his experience in the emergency department, Eduardo remembers Testa. “He was good, a great person, very helpful. He’s the one I can say who saved my life.”

Eduardo’s daughter, Stephanie, credits Testa’s speed and accuracy with saving her father’s life. In her letter, she said, “Timing was so important in this situation, and Hackettstown and Morristown’s great teamwork and fast decision-making saved my father’s life.

“My father has always been the greatest gift of my life, and I wanted to thank everyone. My father talks about Jaymes every day and hopes he can shake the hand of the man who saved his life.”