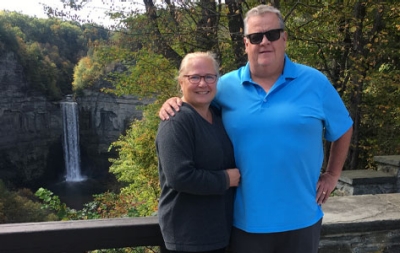 At age 58, Bill G. decided it was time to become healthier “I wanted to start exercising again, but I started feeling very lethargic,” he says. “Just really blah.”

“I had a friend of mine who is 10 years younger than me and definitely more fit than I am, and he had a heart attack and needed a couple of stents put in,” says Bill, who also has diabetes, a precursor to heart problems. “I didn’t want to wait until I had a heart attack to find out that something was wrong with me.”

The power of advanced cardiac imaging

“A stress test is informative for diagnosing coronary artery disease, but the CTA goes one step further by showing exactly where a blockage is located and its severity. Knowing this information helps guide clinical decision making,” Dr. Bartov says.

The CTA showed that Bill had a 90% blockage in the left anterior descending artery (LAD), considered the most important of the three major arteries leading to the heart. Dr. Bartov recommended a cardiac catheterization, a procedure considered the gold standard for diagnosing coronary artery disease.

“Dr. Bartov laid out our plan of attack,” Bill says. “He told me this is what I recommend, but it’s ultimately your decision. He said it in a way that was easy to understand. He made me and my wife feel a lot more relaxed.”

Getting fast care for a troubling heart problem

“I predominantly use the transradial approach for my catheterizations,” Dr. Bartov says. “It’s associated with improved patient comfort, shorter recovery time, and less bleeding and other vascular complications than the traditional approach of inserting a catheter through the groin.”

The procedure to reopen Bill’s blocked LAD took less than 60 minutes, and he was discharged home the same day. “I went into the hospital around 7 a.m. and was out before 5 p.m.,” Bill says.

Less than two weeks after the procedure, Bill said “I’m feeling great now.” He’s getting ready to start an exercise program and is making a commitment to take better care of his health. And he’s happy to have received quality heart care close to home.

“I’ve lived in this area for the past 50 years, and I’ve always had a great experience with Overlook Medical Center,” he says. “It made a big difference to have this done locally, where my wife could pick me up afterward and I could be back home in just a few minutes.

I’ve lived in this area for the past 50 years, and I’ve always had a great experience with Overlook Medical Center. It made a big difference to have this done locally, where my wife could pick me up afterward and I could be back home in just a few minutes.