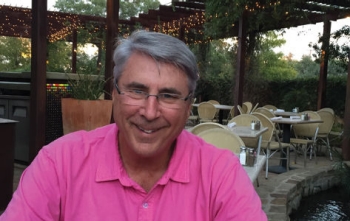 The first time Joe P. felt the effects of atrial fibrillation (AFib)—a condition that causes an irregular heartbeat—he thought he was having a heart attack. “I was coming back from Paris on a plane,” he says. “Fortunately, there was a nurse on my flight. She took my pulse and told me what was happening.”

For nearly three decades, Joe learned to live with his AFib. But in June 2022, despite treatment with strong medication, his atrial fibrillation returned.

“It started happening once a week, then twice a week, then every other week,” says Joe, 76, of Readington Township. Most of the time it felt like his heart was racing, often between 120 – 150 beats per minute. But after he recovered from a summertime case of COVID-19, his Apple Watch detected a different concern.

“It said my heartbeat was less than 40 beats-per-minute for 10 minutes,” he says. “I didn’t even know you could get that warning.”

Concerned, he met with his longtime cardiologist, Andrew Rudnick, MD, with Hunterdon Healthcare. He recommended Joe see Jonathan Sussman, MD, a board-certified, fellowship-trained cardiac electrophysiologist at Morristown Medical Center. “I saw that Dr. Sussman had a lot of positive online reviews, and I had a niece who had worked with him in the past who said he was great,” Joe says.

Benefitting from a clinical trial

When he first met with Dr. Sussman in late summer 2022, Joe received a unique opportunity: the chance to be the first patient at Morristown Medical Center enrolled in a clinical trial called AdmIRE. The study is evaluating the safety and effectiveness of a newer technology, called pulsed field ablation (PFA), in treating paroxysmal AFib, the type of irregular heartbeat that comes and goes on its own—and the type that John had. Morristown Medical Center is one of the hospitals selected to participate in the trial, which hopes to enroll 400 patients in the U.S.

Doctors at Morristown Medical Center have a long history of participating in clinical trials to bring advances to their patients sooner. “In cardiology, technology is evolving very rapidly, and PFA is one of the most highly anticipated innovations I’ve seen in electrophysiology,” Dr. Sussman says. “Clinical trials like AdmIRE give us early access and the right support for safely introducing new tools while moving our field of medicine forward.”

PFA, the treatment being studied in the AdmIRE trial, offers an alternative to traditional ablation. Instead of destroying abnormally firing areas of the heart with heat (radiofrequency ablation) or cold (cryoablation), PFA uses electrical pulses of energy to poke holes in the membrane of misfiring cells within the heart. Those cells lose their function immediately and are replaced by a scar.

As soon as he heard about the trial, Joe’s curiosity was piqued. A retired IT professional, he had spent some time working with a pharmaceutical company. “I knew that a clinical trial meant there’d be more people in the room watching out for me,” he says. So, Joe went home and looked up the trial information online. “Then I called Dr. Sussman the next day and said, sure, put me on it,” he says.

In cardiology, technology is evolving very rapidly, and PFA is one of the most highly anticipated innovations I’ve seen in electrophysiology.

On Sept. 19, 2022, Joe became the first person ever treated with PFA at Morristown Medical Center. During the procedure, Dr. Sussman guided four catheters up through Joe’s femoral artery and into his heart.

Three of the catheters use 3-D mapping and guidance to create a computer model of the inside of a patient’s heart. The fourth, called a VARIPULSE® catheter, has a tip shaped like an open circle that includes 10 ablating electrodes. That catheter delivers the electrical pulses that treat AFib.

Joe’s procedure started at 8 a.m. By 1 p.m., he was already recovering, and he was back home from the hospital that night. “When I had my ablation previously (for a different abnormal rhythm), I had felt some soreness in the heart afterward,” Joe says. “This time I felt nothing.”

One month after his PFA treatment, Joe’s heart continued to beat normally, with no signs of AFib. He no longer needs dofetilide (Tikosyn), a prescription medication he had taken previously to control his AFib. “And I’m hoping to get back on the golf course again real soon,” he says.