Atrial Fibrillation (AFib) is a common heart rhythm disorder that can lead to a number of dangerous complications, including blood clots and strokes. At the Gagnon Cardiovascular Institute at Morristown Medical Center, our experts provide world-class, award-winning cardiovascular diagnostic and treatment services, including the treatment of AFib.

In patients with AFib, the upper chambers of the heart pump in a chaotic, irregular manner. Blood clotting can occur when these irregularities cause blood to pool in those upper chambers. If a blood clot forms and then escapes the heart, it can cause a stroke.

AFib increases a patient’s risk of stroke by five times. While anticoagulant medications (“blood thinners”) are known to reduce that risk, they aren’t appropriate for people with certain medical conditions, occupations, or lifestyles. For these patients, the FDA-approved WATCHMANTM Left Atrial Appendage Closure (LAAC) Device can be a suitable alternative to anticoagulants. 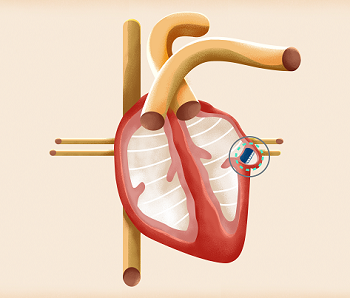 For patients with AFib not caused by a heart valve problem (also known as non-valvular AFib), the WATCHMAN device provides lifelong protection from stroke.

In patients with non-valvular AFib, fully 90% of stroke-causing blood clots are formed in a small, pocket-like part of the heart known as the Left Atrial Appendage (LAA). The WATCHMAN device permanently closes this area off, significantly reducing the risk of stroke from atrial fibrillation.

Implanting the WATCHMAN LAAC Device is a one-time, minimally invasive procedure. Soon after, most patients can stop taking blood thinners, lowering the risk of bleeding and other side effects associated with their long-term use.

Who is a candidate for the WATCHMAN Device?

Candidates for the WATCHMAN Device include sufferers of non-valvular AFib for whom anticoagulants are inappropriate (contraindicated) due to their other medical conditions, occupation, or lifestyle.

Cardiac specialists at Morristown Medical Center’s Gagnon Cardiovascular Institute have offered the WATCHMAN procedure since 2016. In 2020, our physicians were among the first in the area to begin implanting the next generation WATCHMAN FLX.