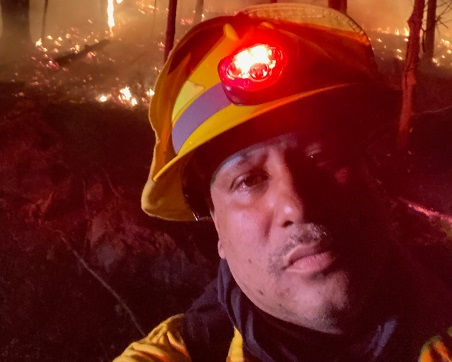 A U.S. Army veteran and volunteer firefighter, Joel S. always puts the welfare of others above his own. But when a heart condition began sapping his energy last year, Joel had to put himself first.

He had just recovered from a bout with COVID-19 in 2021 when he started noticing changes. “I was training one day with all my equipment on and got so tired that I had to lean over,” says Joel, 44, of Rockaway Township. “Then, I was at a fire call and started running out of breath. I said, this isn’t like me. Let’s get this checked out.”

His journey eventually led him to Morristown Medical Center. There, an expert team performed the hospital’s first Ross Procedure, a rare and complex surgery that saved Joel’s heart and his life.

I went with the toughest option because I’m a person that likes a challenge.

Joel’s first step was to find the cause of his symptoms. He visited his VA primary care provider. “She said she heard a heart murmur,” Joel says.

She sent him to the East Orange VA Medical Center. Further testing revealed that Joel had aortic stenosis, a narrowing of the largest blood vessel in the heart. The condition prevents the aortic valve from opening fully, reducing blood flow to the body and causing the heart to work harder.

“Aortic stenosis can be related to a congenital heart defect,” says board-certified cardiothoracic surgeon Benjamin van Boxtel, MD, with Morristown Medical Center. “The vast majority of aortic stenosis occurs in older patients—people in their 70s, 80s, and 90s. But sometimes, like in Joel’s case, it can manifest when someone is in their 30s or 40s.”

At the recommendation of his doctors from the VA hospital, Joel set up an appointment with Dr. van Boxtel. He’s the Surgical Director of the Aortic Center at Morristown Medical Center, the most comprehensive program in New Jersey for people with diseases of the thoracic aorta, including aortic dissection, connective tissue disorders and aortic stenosis.

When Joel first met with Dr. van Boxtel in May 2022, he received three options. He could have his aortic valve replaced with a mechanical valve, but that would mean he’d need blood thinners for the rest of his life. He could have a bovine or pig valve replacement, but those types of replacement valves often don’t last long in younger patients, meaning he’d need at least one more major surgery down the road.

The third option: the Ross Procedure, which replaces the diseased aortic valve on the left side of the heart with a patient’s own pulmonic valve. The pulmonic valve is then replaced with a valve from an organ donor.

“The pulmonic valve is a low-pressure system, which means it typically doesn’t suffer from a lot of wear and tear,” says Dr. van Boxtel. “That makes it a good replacement for the aortic valve in certain patients. The Ross Procedure should be considered in any patient under 60 years old, especially if they have an active lifestyle.”

The Ross Procedure—named for the doctor who pioneered it—is highly technical and challenging. Dr. van Boxtel is among a small handful of surgeons in the U.S. who performs the surgery. When the procedure is successful, patients don’t need blood thinners, and they may not need another valve surgery for the rest of their lives.

“The Ross Procedure is the only treatment for aortic stenosis that restores normal survival to a patient,” Dr. van Boxtel says.

Joel fit the bill as a prime candidate for the Ross Procedure based on his condition, his age and his overall health goals. “I lead a very active lifestyle, so I knew I never wanted to be on any blood thinners,” Joel says. “And I appreciated that Dr. van Boxtel was straightforward and truthful. He explained to me both the pros and the cons of the Ross.”

Before he said yes, Joel went home, did his own research, and talked with his wife, son and daughter. “It was a family decision, not just mine,” Joel says. Together, they chose to go with the Ross Procedure. “I went with the toughest option because I’m a person that likes a challenge,” Joel says.

Joel spent close to a week recovering inside the hospital. “Everyone there was helpful and positive,” Joel says. “My cardiac surgery team checked in on me every day without fail. When I started walking again after surgery, my physical therapists walked with me and gave me the strength to keep going.”

Joel returned home within a week. In the four weeks that followed, he says he’s kept feeling stronger. “I’m breathing a lot better than I was before the surgery,” Joel says. “I’m not getting tired after doing stuff anymore.”

And while he’s not back fighting fires just yet, he expects to be soon. “I want to be at 100%,” Joel says. “The way it looks right now, I’m gonna get there.”