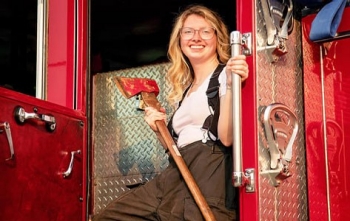 At age 12, Grace R. went for a middle school physical and learned she had scoliosis. “A doctor I went to right afterward said it most likely came from a growth spurt,” she says. Yet Grace never imagined the problems her scoliosis would cause her during adolescence.

From 2017 to 2020, she had four different spinal surgeries at a hospital near her Virginia home. She thought the first one, a spinal fusion in April 2017, would solve her problem. But each time, her symptoms got worse. She developed numbness in her leg. Her back hurt. She could see that her body was leaning forward, a sign of kyphosis, which is when the spine curves more than 50 degrees.

After her fourth back surgery didn’t bring her any more relief, Grace’s doctor told her to live life as normal. “So, I let her do more things,” says her mom, Christie. Then, in September 2021, Christie’s phone rang. It was Grace, who was training to become a firefighter and had just climbed a flight of stairs in full gear. “I was crying,” Grace remembers. “Everything hurt.”

Frustrated, Christie left the next step up to her daughter. “I told her to choose a doctor from anywhere in the world, and I’d take her there,” Christie says.

“We called his office the second week of November 2021, and got an appointment for Nov. 30,” Christie says.

Mother and daughter drove seven hours from Colonial Beach, Virginia., to Morristown, bringing all of Grace’s prior X-rays, MRIs, CT scans and medical records along for the ride. “Dr. Lowenstein spent almost three hours going over each scan in sequence,” Christie says. “He showed us where Grace’s initial surgery went wrong, what broke.”

Fixing it wouldn’t be easy. “Grace had severe scoliosis and high-grade spondylolisthesis [a vertebra that was out-of-place] that didn’t heal properly from her first spinal fusion,” Dr. Lowenstein said. “She also had broken hardware and a spinal fluid leak, all of which made her revision surgery very complicated.”

When Christie asked Dr. Lowenstein if he could help, he gave an honest response. “He said, “I can give Grace a quality of life she hasn’t had since she was age 12,” Grace recalls.

Grace says she connected instantly with Dr. Lowenstein. “I liked that we could make jokes with him,” she says. “It’s not all medical terminology. He’s a human—a normal person with an extraordinary gift, and we’re beyond thankful God led us to him.”

Getting a more detailed view with innovative in-surgery technology
In February 2022, Dr. Lowenstein performed reconstructive spinal surgery on Grace. He replaced the old hardware in her back with new hardware, cut her spine to correct her kyphosis, and removed implants that were putting pressure on her nerves and causing her leg numbness.

During the procedure, Dr. Lowenstein relied on AIRO, a CT scan in the Operating Room at Morristown Medical Center that gives surgeons precise images of the entire spine.

“AIRO gives you details traditional X-rays don’t,” Dr. Lowenstein says. “For complicated procedures like Grace’s, AIRO lets us see with pinpoint accuracy where we’re putting hardware so it’s safe and in the correct position. AIRO also gives us the visibility we need to cut bone around nerve roots and reposition the spine with the utmost precision.” Morristown Medical Center was the first hospital in New Jersey to use AIRO.

Earning a round of applause

After a successful revision surgery and seven days of recovery in the hospital, Grace returned home. “The doctors and nurses cheered for her as she walked down the hallway,” Christie says. “After all we went through, it was a wonderful way to leave.”

By late spring 2022, Grace, now 17, had seen some dramatic results. The numbness in her leg was gone. Her “dropped foot,” another condition she had developed, had resolved. She could stand up straight, and her shoulders were again even. “Dr. Lowenstein gave her back her quality of life for the first time since she was 12,” Christie says.

Best of all, Grace is on track to start her freshman year at Randolph-Macon College in Virginia in September 2022. “I will be a nurse,” she says. “I want to help little kids with scoliosis and show them no matter how much pain they’re in, it’s going to be OK.”