Patients know their own bodies better than anyone and sometimes the difference between complications and a successful recovery is taking action when something just doesn’t feel right. Eileen L. understands this all too well and is forever thankful that she listened to what her body was telling her.

At age 49, Eileen became concerned when she noticed she was gaining weight and appeared bloated in her mid-section. She thought it might be the early start of menopause, but something in the back of her mind compelled her to get it checked out.

Her primary care physician listened to her symptoms and performed a physical examination, but felt that more testing was necessary. When an ultrasound and computed tomography (CT) scan came back with abnormal results, he advised Eileen to see a gynecologist.

Professional recommendations led her to Eric Liberman, DO, a gynecologist specializing in minimally invasive gynecologic surgery at Morristown Medical Center. He met with Eileen and recommended additional tests, which revealed a cyst attached to one of her ovaries. Measuring slightly larger than the diameter of a basketball, it was one of the largest cystic masses Dr. Liberman had ever seen and required surgical removal. There was a very low risk of cancer based on its simple appearance, but Eileen was naturally apprehensive.

“I was scared, but Dr. Liberman was so caring and patient with my husband and me and answered all our questions, numerous times,” Eileen says.

Dr. Liberman presented Eileen with two choices – remove the cyst using traditional open surgery, which would involve a large cut across the abdomen and hospitalization, or opt for a minimally invasive approach using laparoscopy. The latter would deflate and remove the mass using a small incision, resulting in less scarring and a faster recovery.

Eileen decided to go with the minimally invasive gynecologic surgery and it was a complete success. As it turned out, she was not in menopause and Dr. Liberman was able to preserve her remaining ovary.

“I recommended leaving the second ovary because she was not in menopause and the hormones it secretes would support her bone health as well as cardiovascular health, and it was completely normal appearing,” explains Liberman.

Eileen was even able to go home the same day of the procedure and begin her recovery, carefully following the care instructions and medication dosing made easy by Dr. Liberman’s team.

“Everything was written out for me, so that I could reference it in the days to follow. My follow-up appointments went great, and I was soon on my way to a full recovery. I can't say enough about the excellent care I received at Morristown Medical Center and from Dr. Liberman,” Eileen says. 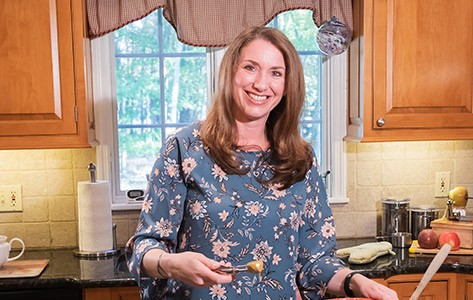 Soon, she was back to doing what she enjoys best – baking and cooking for her husband and two daughters. Even more of a comfort was knowing that the surgically removed cyst was indeed non-cancerous. Looking back on it now, Eileen believes she may have had the mass for quite some time, but didn’t know something was wrong until she heeded the signals from her body.

“My advice to any woman is to see your doctor regularly and talk with him or her about any changes, even small ones that you have noticed,” Eileen says. “There could be a bigger issue that hasn't surfaced, yet. We deserve the best life we can have and there are excellent doctors associated with Atlantic Health System who can help!”