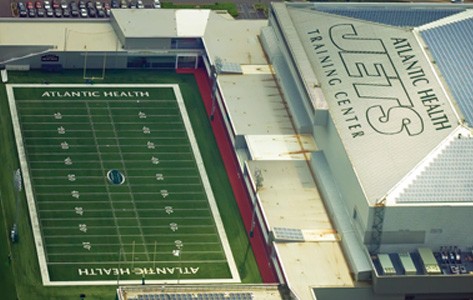 Atlantic Health System is proud to have a multi-year partnership agreement with the New York Jets. Not only are we the “Official Health Care Partner of the NY Jets,” we are also the naming partner of the team’s corporate headquarters and training facility – the Atlantic Health Jets Training Center – a state-of-the-art complex located in Florham Park, NJ.

In addition, Atlantic Health System is the title sponsor for the Jets Women’s Organization – a group that works with charities and is dedicated to volunteering in the tri-state community. This organization is comprised of the wives, fiancées and significant others of Jets players, coaches and select football support staff members. 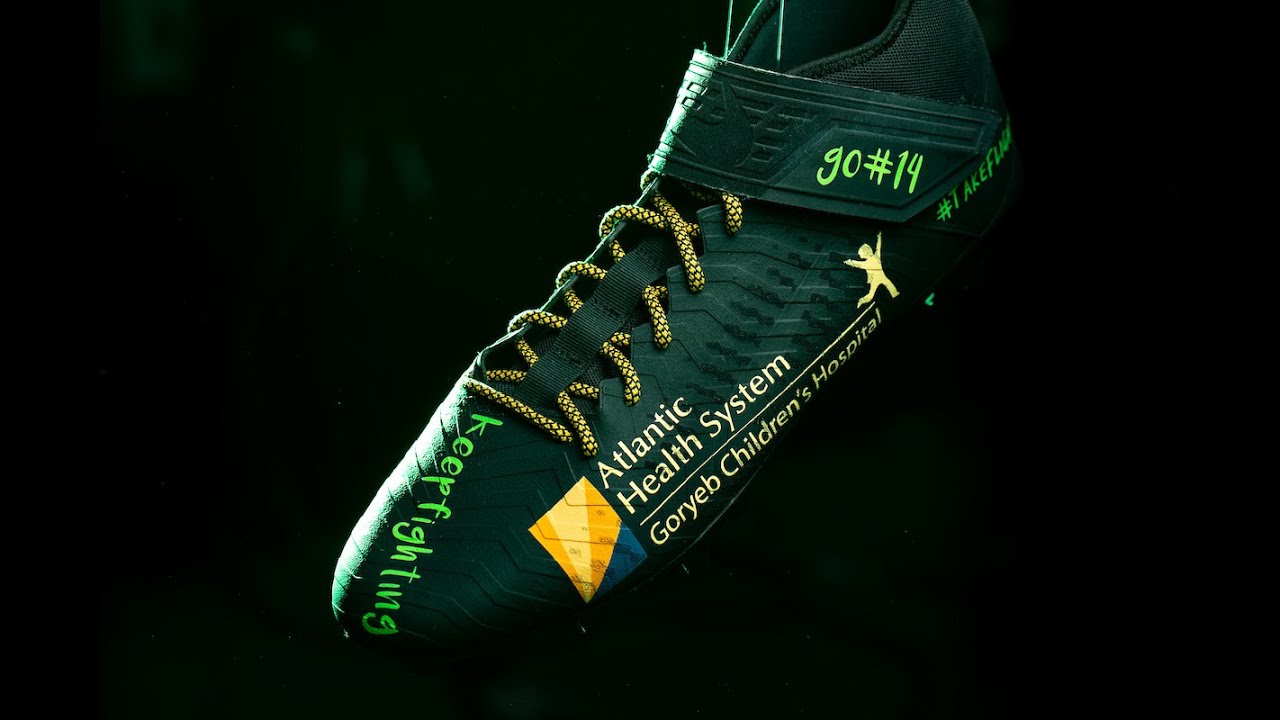 Darnold – who joined hundreds of players across the NFL in wearing custom cleats representing charitable causes that are important to them – wore cleats filled with words of encouragement and inspiration from kids at Goryeb Children’s Hospital during their win against the Miami Dolphins on Sunday, December 8. Darnold chose Goryeb Children’s Hospital as it has been a special place for him since joining the Jets.

“Goryeb Children’s Hospital was one of the first stops I made after being drafted and I’m proud to support these kids any chance I can,” said Darnold. “I’ve made some incredible memories and connections with the children and their families that I’ve been fortunate enough to meet, so having their words of inspiration with me during the game is truly special.”

There’s still time to bid on Sam Darnold’s inspiring, game-winning cleats with 100% of the proceeds benefiting the hospital. To bid on the customized cleats and support Goryeb Children’s Hospital please visit NFL Auction. The auction closes on Sunday, December 29, 2019. 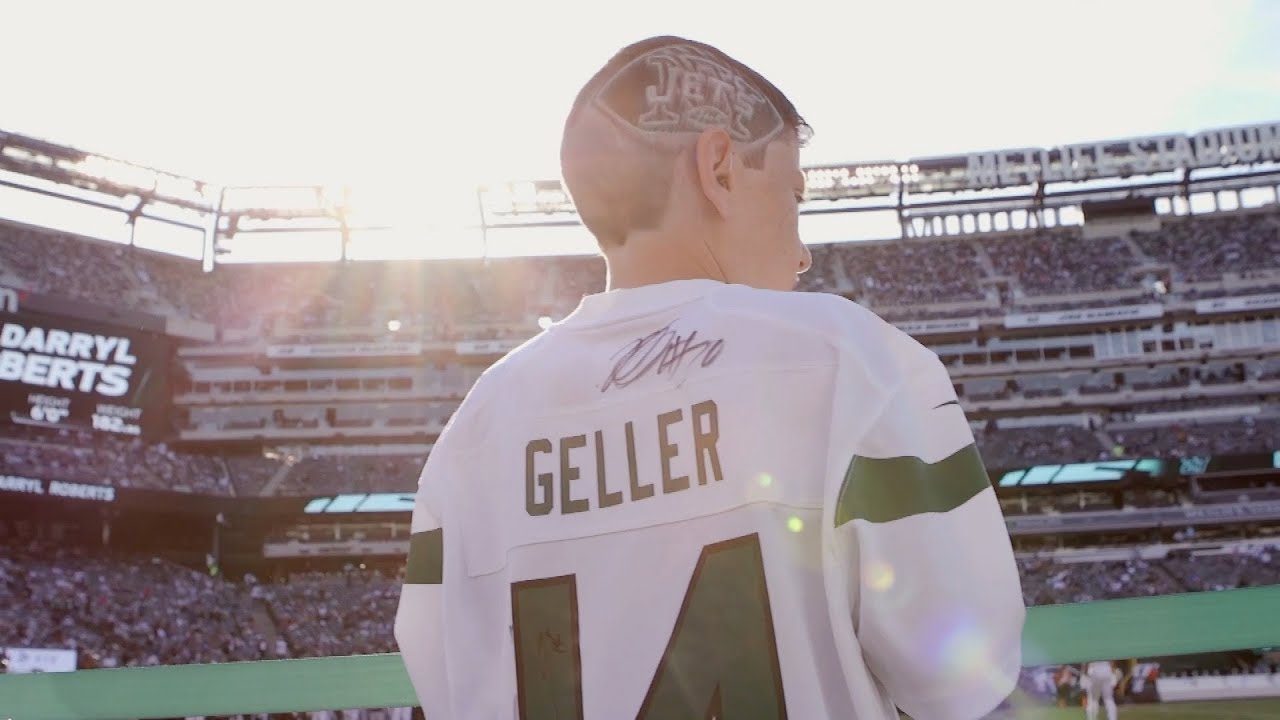 When Ethan Geller of Mendham, NJ had a brain tumor removed and was diagnosed with medulla blastoma (brain cancer) at the age of 7, his parents stayed positive during this difficult journey.

“There is an inner toughness to him, this kid will survive anything,” said his mother, Lisa.

Thanks to the cancer team at Atlantic Health System’s Goryeb Children’s Hospital, Ethan is now a healthy 11-year-old boy who is cancer-free.

With his family by his side, the New York Jets and Atlantic Health System provided Ethan – a dedicated Jets fan – with a memorable on-field experience when the Jets took on the Dallas Cowboys in October. Ethan served as one of the honorary captains for the coin toss prior to kickoff and had the opportunity to meet not only QB Sam Darnold, but his favorite player and Jets Legend, Joe Namath.

“I mean this was above and beyond, magical, it really was a magical day,” said Ethan. “It meant everything to me.”

A little over a year later after Jay Ziegler suffered a massive heart attack, he found himself on the sidelines during pre-game warm ups when the New York Jets faced off against the New England Patriots on Monday Night football. As a lifelong Jets fan, Jay took this moment to not only revel in the fact he was serving as an honorary captain for the coin toss prior to kickoff, but to reflect on how far he’s come since his cardiac event.

“I was under the care of extraordinary people. I’m feeling as good now as I have ever felt; with the opportunity for a full and fruitful life,” said Jay. “Tonight is a celebration of what these people achieved for me – I’m very grateful.”

Jay’s life was saved by the coordinated expertise of countless professionals at Atlantic Health System’s Newton and Morristown medical centers. When Jay collapsed in the parking lot outside Newton Medical Center, Angie Saint-Joseph, a patient care technician, saw him and called the code to start the chain of survival.

“I am so thankful I was in a position to help save his life and today we’re celebrating it,” Saint-Joseph said.

Once he was stabilized, the team at Newton arranged for air transfer to Morristown Medical Center. By the time Jay landed on the helipad, the heart team was ready and waiting for him in the cardiac catherization lab while also preparing a cooling technique to cool his entire body and protect his brain.

Atlantic Health System's Morristown Medical Center – one of the top 30 programs in the country for Cardiology & Cardiac Surgery (U.S. News & World Report) – was the beneficiary of the Jets 50/50 Raffle presented by Florida Tech. The total jackpot brought in $65,266.00. $32,633.00 of the money raised went to support Heart Care at Morristown Medical Center. 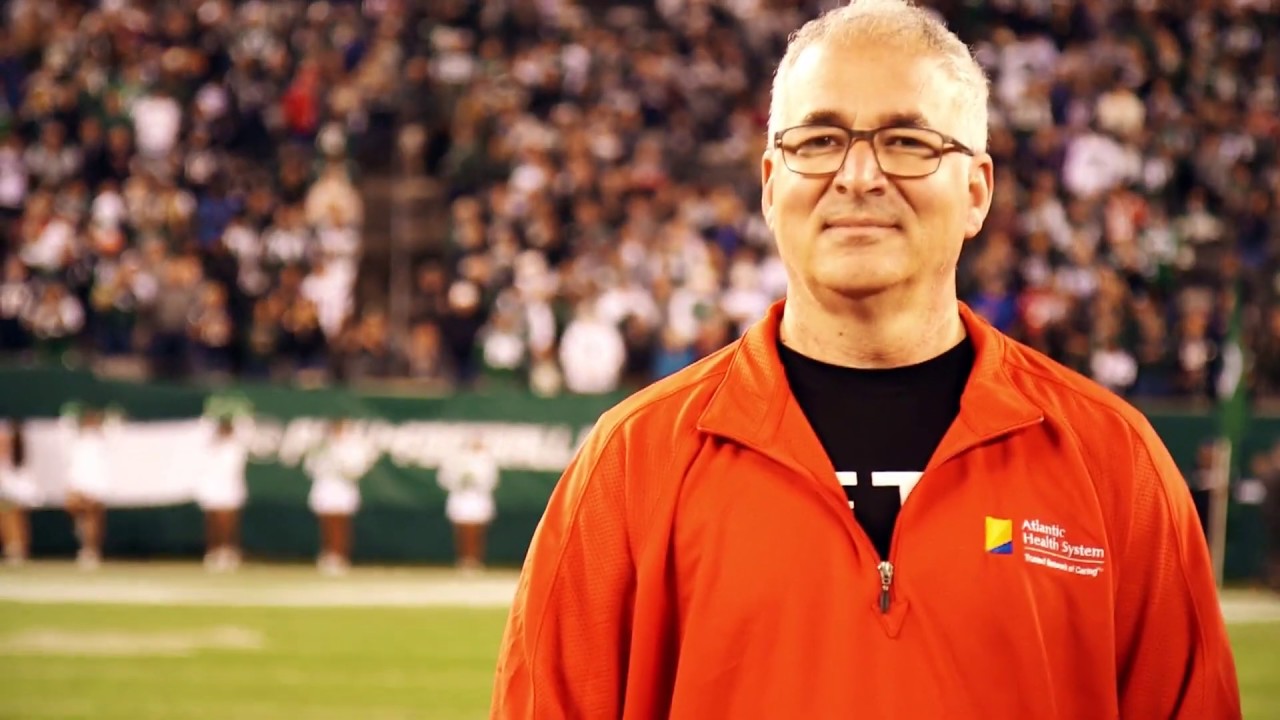 Five inspiring children who are undergoing or have completed treatment at Atlantic Health System's Goryeb Children's Hospital joined the New York Jets for their game against the Dallas Cowboys on Sunday, October 13, 2019. Ellie, Ben, Will, Arion and Ethan enjoyed time on the sidelines during pre-game warm ups and had the opportunity to talk to QB Sam Darnold and OL Kelechi Osemele before heading out onto the field to serve as honorary captains for the coin toss prior to kickoff. 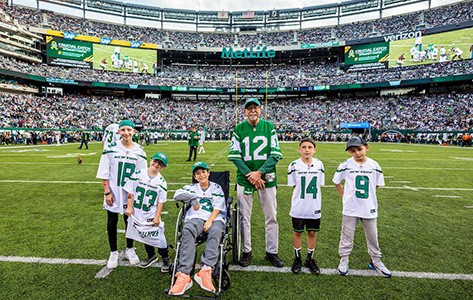 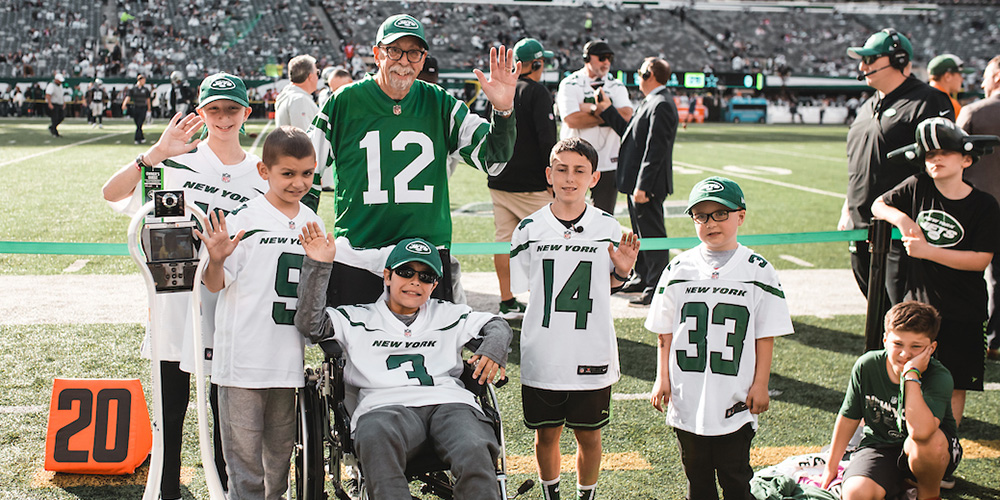 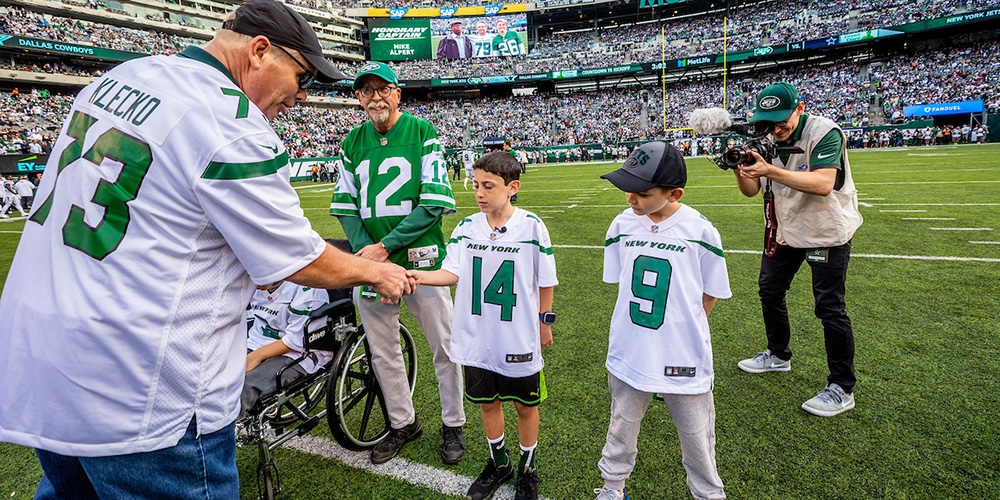 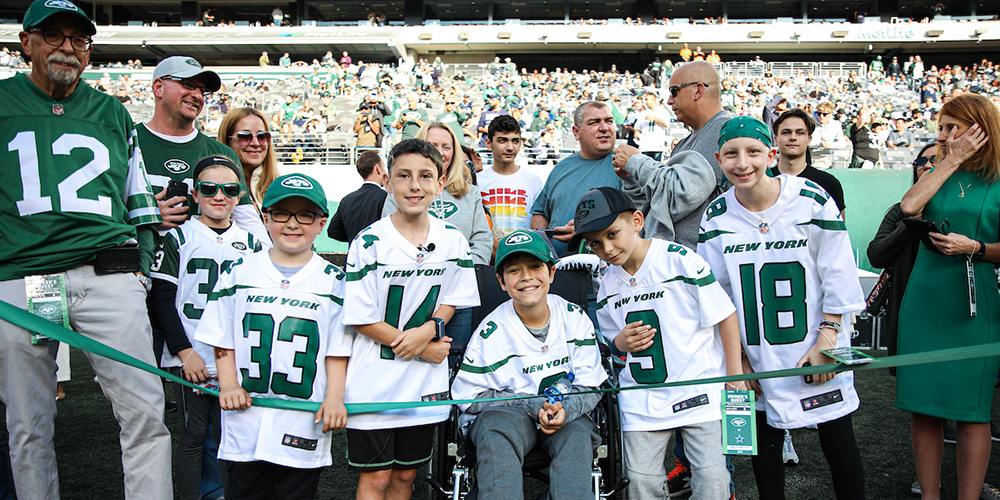 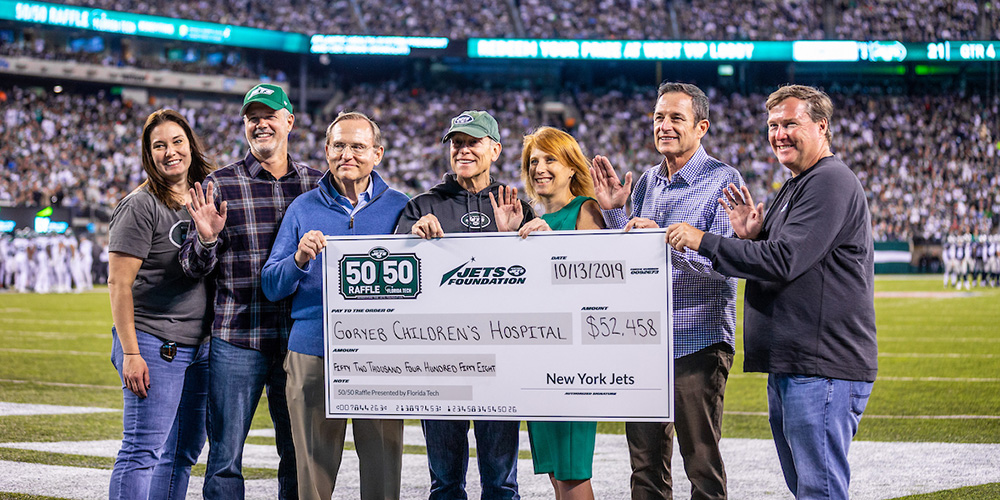 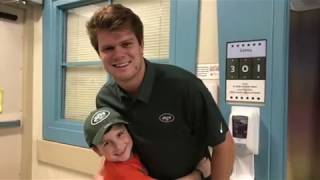 Sam Darnold, the New York Jets' first round draft pick, certainly didn't waste a moment in giving back to his new community. On the Saturday following the draft, he made his “first big play" with the team, joining former Jets fullback Tony Richardson for a special draft party at Goryeb Children's Hospital. Darnold spent more than an hour visiting with the children and their families, signing autographs, taking pictures and making some very special memories with parents and team members.